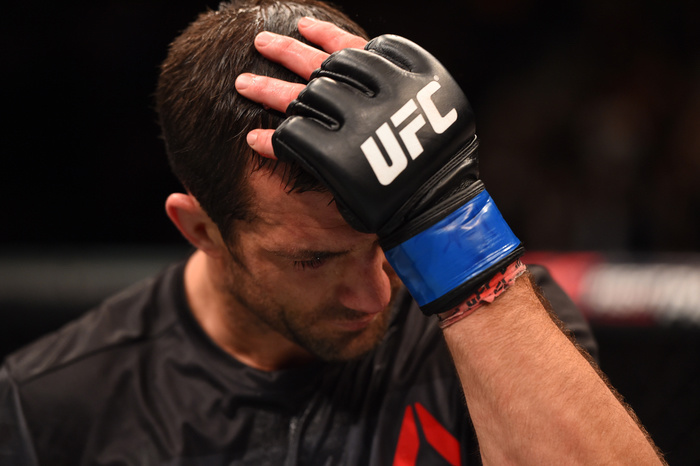 The last time Luke Rockhold and Chris Weidman shared the Octagon at UFC 194 in December, it started off every bit the close, exacting fight you'd expect between an undefeated middleweight champion and a contender on a five-fight winning streak. That is, until the third round, when Rockhold capitalized on Weidman's recklessness, climbed into mount, and dropped punches until everyone who was watching squirmed in their seats. The between-round intermission couldn’t clear away Weidman's daze, and more strikes from Rockhold ended the fight with a fourth-round TKO stoppage.

It was an unambiguous ending. The only question left unanswered was whether it should have ended sooner.

But somehow, we're four months away from the sequel. Earlier this week, UFC president Dana White announced that Weidman and Rockhold are scheduled to rematch in June at UFC 199. Weidman gets a chance to prove that he's better than he showed in December, Rockhold gets to fight at the event he never wanted to be a part of, and the rest of us are left with yet another question: why so soon?

The immediate rematch is a key feature of the champions' benefits package—just accrue enough time at the top or find yourself on the wrong side of a weird decision, and you'll have a chance to win the belt back as soon as it isn't yours. But since those standards are felt instead of defined, this benefit isn't available to everyone. For former welterweight champion Johny Hendricks, a split-decision loss to Robbie Lawler wasn't enough to muster interest in a rubber match. For Cain Velasquez, after his breathless submission defeat to Fabricio Werdum, simply being a heavyweight justified the idea of running it back. For poor Jose Aldo, it remains to be seen whether six years as the featherweight champion across two Zuffa-owned promotions are enough to outweigh the sting of his quick knockout to Conor McGregor at UFC 194. Weidman's three successful title defenses in two years were impressive—he's still the only person to beat Anderson Silva in the UFC, after all—but it's not the sort of résumé that automatically affords rematch privileges.

Immediate rematches elevate enthusiasm for the recently defeated over their peers. Yoel Romero would have been a new and competitive fight for Rockhold, but he was cited for an out-of-competition violation of the UFC's anti-doping policy last month. (Romero's manager said that he plans to challenge the result.) Vitor Belfort, the last man to defeat Rockhold, is still carrying baggage from his time as the TRT era's sinewy poster boy. For Ronaldo "Jacare" Souza, who followed a Strikeforce title loss to Rockhold with eight straight wins, the scorecards written in Romero's favor at UFC 194 smothered his momentum. Weidman is as credible as any of his top-five peers, and in a choice of which vanquished fighter to reposition as contender, context matters: the one who lost the belt (Weidman) is generally an easier sell than the one who lost a non-title fight (Souza).

But salability doesn’t change the fact that the last time Rockhold and Weidman fought, one of them lost as emphatically as the other won. Rockhold thumping on Weidman at his most vulnerable was a brutal extension of the don't-leave-it-in-the-hands-of-the-judges ethos we claim to admire. Rebooking the fight without an intermission feels too much like a do-over.

Ideally, that intermission would look something like welterweight champion Robbie Lawler's, who vindicated a March 2014 loss to Johny Hendricks after a pair of non-title bouts with Jake Ellenberger and Matt Brown first. A beaten challenger fighting someone else gives spectators fresh faces and room to breathe: Right now, Chris Weidman's best-case scenario probably means a yearlong bottleneck in the division as he and Rockhold gear up for a third meeting. Meanwhile, the rest of us would have to sustain interest in watching the same dudes fight for the same belt.

New opponents also hint at whether a loss was an off night or the first step toward decline. One of the hazards of booking Weidman-Rockhold II so quickly is that, if Weidman loses, it creates a narrative of professional decline simply because he lost to a guy who's a bad style match-up. Think about how unfairly Anderson Silva went from being called unbeatable to a has-been who only fought chumps because Weidman beat him twice in succession.

None of this should suggest that Weidman doesn’t deserve a rematch with Rockhold—it's easy to forget that this was Weidman's only loss. Both fighters claim they weren't fighting to their full potential, so when they share the Octagon again at UFC 199, the result could overshadow their first fight. But if the sequel looks just like the original, there are slim odds for a trilogy.

Luke Rockhold and the Success of Strikeforce Alumni in the UFC