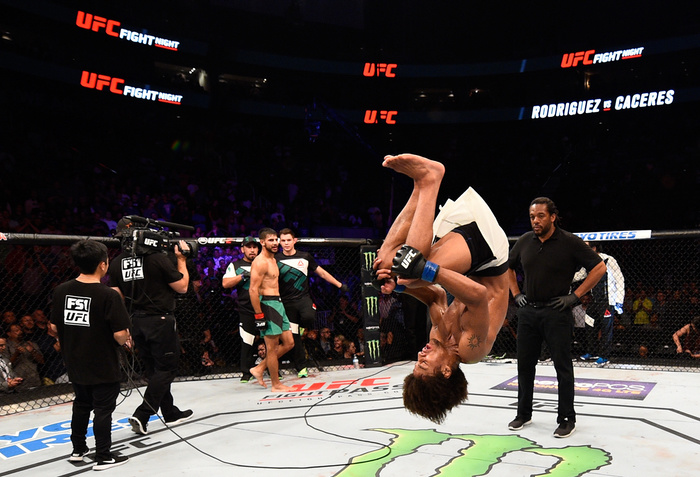 Last weekend's UFC event combined a so-so line up in terms of star power with that harbinger of bad cards: a location at elevation. The UFC continues to book cards in cities four thousand feet above sea level and everyone who takes part comes out looking bad as they wind up panting by the end of the first round. UFC Fight Night 92: Rodriguez vs Caceres took place in Salt Lake City and many of the fights were not much fun. It was the main event that is dividing opinion though. Yair Rodriguez versus Alex Caceres either saved the event or plunged it further into mediocrity depending on who you ask.

The main event seemed a good one for about two rounds as Yair Rodriguez and Alex Caceres spun all over the Octagon. It was then that it began to dawn on viewers that this wasn't actually accomplishing anything. The men were working at an appalling connection rate and never committing to setting anything up. That is the thing about spinning or jumping strikes, they do take a higher degree of skill to perform than more fundamental strikes, but almost any healthy fighter can learn to perform them. It's the landing them which is the hard part. Caceres and Rodriguez leapt all over the Octagon, giving up their backs and hitting nothing but air, and to be honest it was hard to enjoy it any more than you would the Olympic Taekwondo.

The cult of spinning attacks has been growing in recent years but there are plenty who still don't seem to realize that they are effective only when placed in the context of a complete game. No one is saying that Rodriguez should drop the spinning attacks and focus on the fundamentals, they're saying that he should use the fundamentals so that the spinning attacks actually work. We discussed this in our pre-fight look at Rodriguez: if all you ever do is unorthodox stuff you stop being 'unpredictable' and you just become one-note in your wildness. Every time you attack the opponent will step back, and there isn't a single technique in the arsenal of any martial art which isn't killed by a retreat out of range. So for five rounds Rodriguez performed balletic violence against the air a foot or two in front of Caceres and Caceres would occasionally respond in kind.

It was incredibly impressive that Rodriguez kept throwing these chains of spins and jumps for five rounds at elevation, and he most certainly has the physical gifts to be a world beater, but Rodriguez's boxing and ringcraft left a lot to be desired. A kick would be followed by a heads down, freestyle swimming style flailing of limbs. After which Rodriguez would give up underhooks or even his back to Caceres. This is not the kind of stuff you want to be doing in a division packed with skilled counter-punchers and durable wrestlers.

The rest of the main card was largely made up of tedious slogs but there were a few good finishes on the undercard. Teruto Ishihara decked Horacio Gutierrez with a lovely back-stepping punch as the latter drove in on him. Ishihara's discipline in moving his head while taking fire not only prevented Gutierrez from capitalizing on the momentum of catching Ishihara on one leg, it also allowed Ishihara the space and time needed to recognize his chance to counter. If you're getting hit in the head and you're still conscious, it's never too late to start moving your noggin.

But that was not before Ishihara could show one of the most transparent shot at an opponent's hips that you have ever seen outside of a Renan Barao fight. A very strange thing to see from someone who has been wrestling at Team Alpha Male for so long.

Elsewhere David Teymur did an excellent job of controlling Jason Novelli in their lightweight bout. If you were looking for 'Octagon control' in the sense of moving forward, Novelli had it all. Except it was Teymur leading the dance as Novelli followed the kickboxer around the cage.  Teymur would throw out hard left round kicks to keep Novelli's arm braced and ready, before dancing away some more and stepping in to meet the pursuing Novelli with a left straight down the pipe. Early in the second round one such left straight decked Novelli and Teymur followed up to finish. Perfect ringcraft, perfect finish, I look forward to seeing more of this man.

We were treated to a rare heavyweight high kick knockout by Marcin Tybura. But this had more to do with Viktor Pestor dropping his right hand down to his belly button when he swung his left.

The best fight of the night, though the participants of the Beyblade main event got the $50 grand bonus, was probably Cub Swanson versus Tatsuya Kawajiri. As someone who gave up hope on Kawajiri a while back and hasn't been paying attention to him recently this was a surprise to me. Kawajiri came out kicking, Swanson looked to time the right hand down the middle. When Kawajiri first shot in on Swanson we saw Swanson use the short elbows which the Nak Muay of ONE FC first demonstrated a few years back and Joanna Champion has made famous in the UFC.

But Kawajiri might be one of the best fighters you will see at finishing a takedown from his knees, once all of his momentum has been halted. After hooking his leg around Swanson's near leg and failing to drive through, Kawajiri was able to force Swanson forwards onto his hands, occupying the hand which would be overhooking and protecting the path to Swanson's back. Though Swanson was able to start working towards his butterfly hooks, which have been his saving grace against many of the wrestlers he has fought.

Kawajiri was able to mount Swanson and begin working Swanson's right elbow up along the mat to threaten an arm triangle but Swanson recovered guard well. Kawajiri has always liked grapevining the legs, he began using that figure four around the thighs mount to set up his arm triangles shortly after his old rival Shinya Aoki began showing it, and along the fence in this bout he grapevined Swanson's legs well to try to prevent the stand up. A position we sometimes jokingly call 'laming it out'. Swanson did an excellent job of getting his head below Kawajiri's and drawing his butterflies back under The Crusher.

Swanson hit another beautiful stand up from closed guard along the fence, as he began to attack with what looked like an over the back, belly down armbar—sometimes called a 'swim move'—and instead swung his leg straight over the top of the postured down Kawajiri and rolled out to his feet. Very unorthodox and very cool to watch.

Perhaps the weirdest part of the fight was Kawajiri's striking. There was a point when he was a big star in Japan and he was convinced he could kickbox very well, he even took a K-1 fight with Masato and got battered. While his kicks looked powerful and useful in this bout, he went to a right straight into spinning backfist non-stop, effectively foreshadowing the main event as he missed time after time.  The most successful moment for Kawajiri on the feet came as he double jabbed into the straightest right hand I've ever seen him throw and snapped Swanson's head back. It's amazing how fast a fighter can appear when they switch from wild swinging and unorthodox spinning to the fundamental straight hitting that has built the sweet science.

But then Kawajiri returned to the spinning and winging.

Cub Swanson's favorite low-low kick made its usual appearance and nicely off balanced Kawajiri to create openings for punches. The judo principle of kuzushi in action in a striking contest.

Reviewing this bout after the main event it was interesting to note that Swanson, a man whose wildness is considered to have cost him against men like Frankie Edgar, still has his method. He builds to combinations and counters his own way, it is systematic and not just throwing muck at a wall to see what sticks. That is something which both the young fighters in the main event could benefit enormously from realizing.

Not a great night of fights, but it served its purpose. It shortened the wait to UFC 202, even though that is still an agonizing two weeks out.