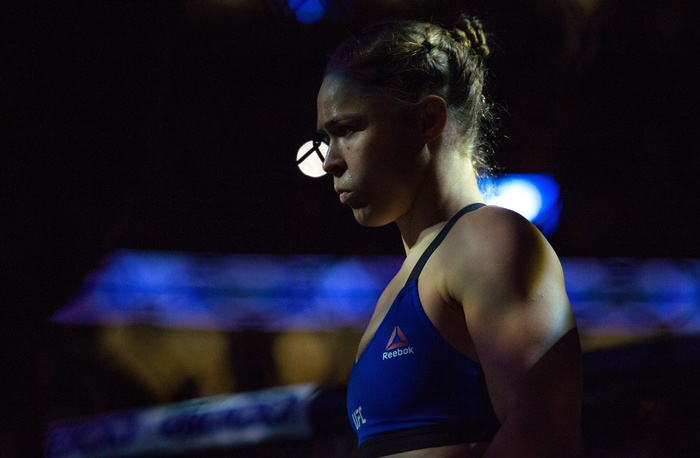 Being a writer in the middle of a culture and MMA Venn diagram can be a lonely place. In one circle, some of my colleagues and old training buddies treat the consumption of any television, film, book, or art that’s not somehow related to martial arts as an empty distraction. In the other, the mere mention of my other life was cause for either polite but bored dismissal or another round of stale conversation about whether or not MMA is just human cockfighting at press conferences, parties, and other networking events.

Part way through 2014, though, I started noticing a shift in the latter side. Amid the disinterest and disinformation, I started running into some genuine outsider interest in the MMA world. And almost every single time I found myself in one of these strange new conversations, someone else brought up Ronda Rousey.

Within MMA, I was already watching Rousey’s runaway crossover appeal confuse and frustrate the die-hard fans. Outside of it, though her star power was starting to make perfect sense to me.

Part of it was how effective the UFC’s Rousey myth-making machine was. For those who had little understanding of what went into a mixed martial arts bout and no real concept of the relatively brief history of women’s MMA or the depth of the talent pool that she was plowing through at the time, she really did look like the unbeatable, once in a lifetime force of nature that Joe Rogan sold her as in his many pro-Rousey soliloquies. And the sight of a young woman stepping in and decimating the sport was refreshing and maybe even liberating for anyone who had been put off or alienated by the Axe-scented, TapOut-clad, testosterone-gushing reputation that the sport, particularly the UFC, still wasn’t doing the best job of shaking. Hell, I was starting to believe.

But Rousey’s appeal to outsiders went far beyond that. It was the very things that confounded her detractors that were most entrancing to the uninitiated. Within MMA, a culture that, outside of a few anti-heroes and Ric Flair impersonators, still demands superhuman conduct, unceasing humility, and steely stoicism from its participants, her intermittent sportsmanship, unbridled ego and mouth, and hair-trigger emotions—especially those seemingly omnipresent tears—were unforgivable transgressions unbefitting of a champion. To other people, though, this wildly imperfect humanity trapped inside a seemingly flawless killing machine ranged from mildly intriguing to a completely new view into a world they’d never paused to consider. MMA, this Rousey character helped them realize, wasn’t a hyper-masculine Karate Kid with bad tattoos; it was an unceasingly complex human drama where brilliant and flawed people put their not quite fragile but definitely breakable minds and bodies on the line in the pursuit of greatness.

Admittedly, it was far easier for the casually interested pop culture aficionado to appreciate this. Even if film and television still struggle with the concept of likable vs unlikable women to this day, people involved were at least having the conversation. MMA wasn’t particularly prepared for a complex champion who wasn’t a Georges St-Pierre-like paragon of virtue or a woman. To find both in the UFC’s inaugural female champion was jarring, to the say the least. Television had over a half century to work up to Breaking Bad’s Skyler White and, even then, her complicated existence sent viewers into such fits of outrage and woman-hating horrors that actress Anna Gunn took to the New York Times to address the antipathy she’d faced 2013. Women have only been part of the sport’s current biggest stage (as more than window dressing) for a handful of years. It’s a pretty steep learning curve. 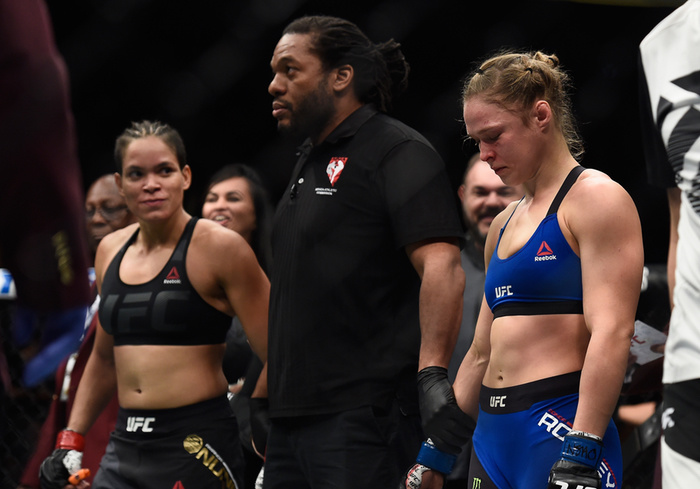 Any woman, no matter how perfect, would have faced a certain amount of scrutiny in her position, and Rousey, long before she adopted imperfection as a marketing gimmick, was far from unimpeachable. Even amongst her supporters, Rousey fandom was often a complicated thing. If you loved her skill, her coaching choices were (and remain) a constant source of frustration. If you looked to her as a role model, her Do Nothing Bitch ethos was a bunch of alienating white feminist bluster and her treatment of women like Fallon Fox and Cris Cyborg was genuinely harmful. If you weren’t predisposed to liking her, there was plenty to criticize. And also plenty of excuses to heap more abuse on her under the guise of caring about the sanctity of the sport.

When Rousey fell to Holly Holm and from grace in late 2015, cultural critics I knew started asking me what was behind what they saw as a sudden backlash against her. I told them that it was, like the fighter herself, complicated. That she was facing both justified criticism as a fighter and public figure and bile for being an uppity woman and that it wasn’t always easy to draw a definitive line between the two (or explain that nuance to other people without being dismissed as a Rousey nuthugger or shill immediately, for that matter).

I’m having a similar round of discussions now that her big comeback fight against the reining Women’s Bantamweight Champion, Amanda Nunes, ended in even greater defeat in both the literal and figurative sense. I’m telling people that, even though the backlash remains at least partially unfair, I can hardly blame Nunes for the vindication she’s feeling after being treated like an afterthought in her first title defense or fault those who have been injured by Rousey’s behavior for indulging in schadenfreude right now. And I’m starting to say that I get the frustration some fans feel when it comes to the disproportionate amount of attention that she’s received over the years (even as I acknowledge that I contribute to it with these very discussions).

As the conversation shifts to her potential legacy, I’m also starting to realize that I’d like her to be recognized as a trailblazer not just for women in the UFC, but for flawed humanity in MMA. As much as I want the outsiders who have been intrigued by Rousey’s rise and fall to pay attention to the generation of fighters who are now emerging from her shadow, I also want people on both sides of my Venn diagram to look past the hero and villain archetypes we’ve so often embraced in arts, mixed martial and otherwise, to see the bigger deeper stories that have always been boiling beneath the surface.