Ronda Rousey and the Feminism of the Bitch 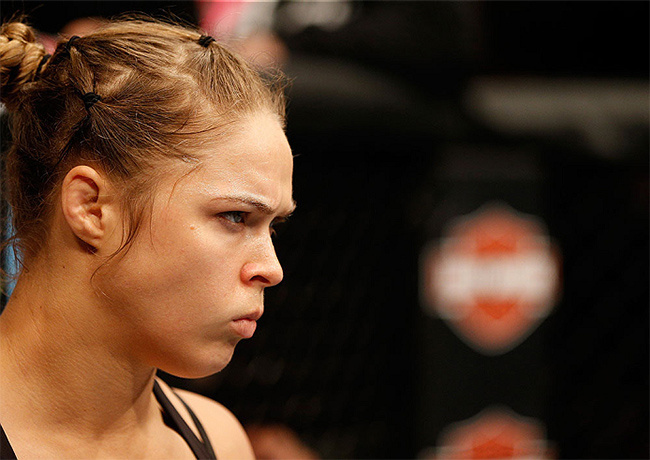 When Ronda Rousey first challenged Miesha Tate for the Strikeforce bantamweight championship in 2011, the MMA community was shocked by her presumptuousness. Ronda was not in the same weight class as Miesha and she hadn’t been fighting that long. MMA veteran Sarah Kaufman was quietly waiting in the wings for her shot at the title, and everyone knew she was next. But Ronda aggressively demanded the fight, a wish that was granted by Dana White and which promptly launched not only Ronda’s career but women’s MMA as a whole into the stratosphere.

The backlash was instant and, of course, gendered. Much of the disgust with Ronda’s challenge was that she hadn’t waited her turn. And underneath those rumblings was the not-so-subtle and insidious insinuation that her behavior had not been appropriately feminine. Women do not demand recognition! They politely wait for the men in charge to recognize them! Ronda demanded a title shot, which made many people in the WMMA community snub her in a manner reminiscent of scene in a Jane Austen novel.

MMA is not the Junior League—it’s professional fighting. Yet the critiques of Ronda, from men and women alike, were, and are, primarily centered on her egoistic attitude and “cold” behavior: Ronda shoved her way to the spotlight, Ronda refused to shake Miesha’s hand post-fight, Ronda is not humble or quiet. And all of these attributes combine to create the ultimate designation: Ronda Rousey is a bitch.

The term “bitch” is a pejorative used to describe women who do not fulfill the social obligations specific to idealized femininity. A woman who is a bitch does not “play nice,” whatever that entails. But the qualities that make a woman a bitch are the same qualities of a woman in power. And many feminists, including me, not only welcome the distinction but self-describe as bitches.

Ronda embodies a particular brand of feminism by not actualizing the ingratiating and conciliatory woman idealized in our culture. She isn't following the recommendations of Emily Post or the storyline of a heroine in a chick flick. Instead, she follows the narrative of the bad-boy athlete.

As such, Ronda remains a devise figure in the MMA community. But her actions, while not aligning with the traditional socialized practice of female demureness, are not without historical precedent. In the 1720s, Britain’s famous female boxing championess Elizabeth Stokes arrogantly asserted herself through many colorful challenges in the newspapers. Elizabeth had won all of her matches with apparent ease, and after being challenged by an ass-driver named Ann Stokes in 1728, she responded in her usual cocky manner:

I, Elizabeth Stokes, of the City of London, have not fought in this way since I fought the famous boxing woman of Billingsgate 29 minutes, and gained complete victory, (which was six years ago;) but as the famous Stowe Newington ass-woman dares me to fight her for the 10 pounds, I do assure her that I will not fail meeting her for the said sum, and doubt not that the blows which I shall present her with will be more difficult for her to digest than any she ever gave her asses.

Love it or hate it, the media is an important aspect of the fight world, and like many fighters before and after her, Elizabeth Stokes is remembered not only for her skill in the ring but for her incredible media presence. When Ronda Rousey demanded a shot at Miesha Tate two years, WMMA suddenly went from a marginalized corner of the sport to the headlines. Eventually, WMMA would make it to the UFC and a female fight would make it to the main event. So while Ronda Rousey may be a bitch, she’s also the catalyst for the sport of WMMA and the reason we’re having this discussion at all.

Women Punch, Kick, and Imagine Their Way Into the MMA Narrative

Women Really Arrive in the UFC