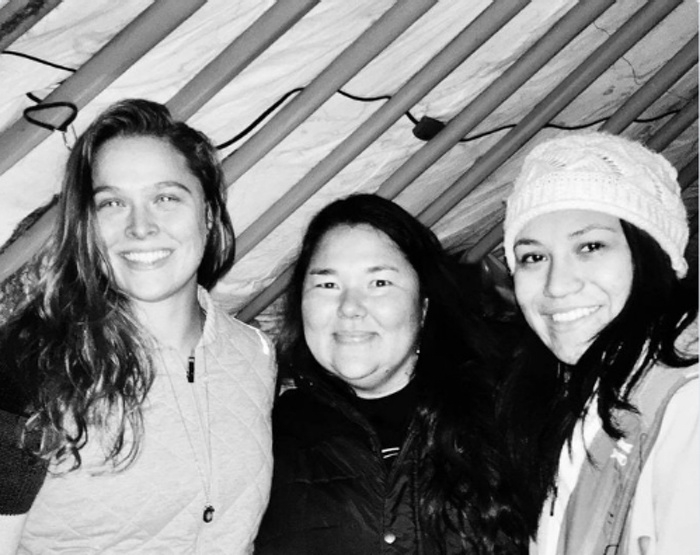 When the darkness is closing in sometimes all it takes is a little glimmer of light to keep you going. I just never imagined Ronda Rousey would be that light.

But there she was on Twitter this week, the former UFC bantamweight women’s champion, showing up at the Standing Rock Indian Reservation on the North Dakota/South Dakota border to bring supplies to protestors fighting against the construction of the Dakota Access Pipeline. Bringing a little light to a dark corner of an increasingly dark world.

Protests have been ongoing at Standing Rock since last April, centered around the $3.8 billion pipeline’s planned crossing under the Missouri River on its way from North Dakota’s Bakken Formation to southern Illinois, which tribal leaders and environmental groups say would threaten the area’s drinking water and several significant cultural sites. In December, after months of protests and often violent reactions from military, police, and private security, the Army Corps of Engineer, under President Obama, denied an easement for construction under the Missouri River while an environment impact assessment could be conducted, bringing the project to a rather stunning halt. But while the majority of the protestors celebrated Obama’s decision and promptly left, many have stayed. To those Rousey brought fresh fruits and vegetables, word-burning stoves, and tents this week.

Her timing couldn’t have been better. Just days after Rousey’s visit President Trump signed an executive order to advance construction of the pipeline and expedite the environmental review process. Which means the struggle will kick into gear again soon and more protestors will most likely be returning to Standing Rock.

Rousey’s appearance on Twitter and at the Standing Rock camp came as something of a surprise. After losing her belt to Holly Holm by knockout back in November 15, the face of the UFC and budding film star all but vanished from the public eye for a year. And when she did appear—in a random paparazzo’s photograph or on a daytime TV talk show—she looked sullen and depressed. Gone were the light in her eyes and the confidence in her voice that had terrified so many fighters and inspired so many fans, many of them young women. For nearly a year this icon who had been everywhere was nowhere. Questions about her mental state abounded, as did rumors that she would never return to the Octagon. So when Rousey got knocked out by current champion Amanda Nunes in her return fight this past December I think everyone assumed she would vanish again, this time never to be seen in public again.

That Rousey reappeared not even a month later is heartening. That she did so standing next to two little-known protestors at the Standing Rock Indian Reservation, rather than, say, Vin Diesel at the premiere of some action movie, is inspirational, and instructive. The last thing Ronda Rousey, a notoriously sore loser with severe self-flagellating tendencies, needed was another year tucked inside herself. No, life is with people, out there in the world! Something must have made Rousey realize that the best way to get a little peace of mind would be to get out of her own head, to exist with and for others. If marching through Manhattan last weekend with half a million people taught me anything it’s that sometimes the only solution to depression, personal or political, is lining up with some like-minded people and raging against the dying of the light—on the street, at Standing Rock, anywhere you feel the darkness closing in, which, let’s be honest, is everywhere. By showing her support for a ragged band of Native Americans fighting (yet again) against an American government indifferent (yet again) to their concerns, Rousey was getting a little redemption, both for herself and for her battered country.