Ronda Rousey Gets It From Her Mother 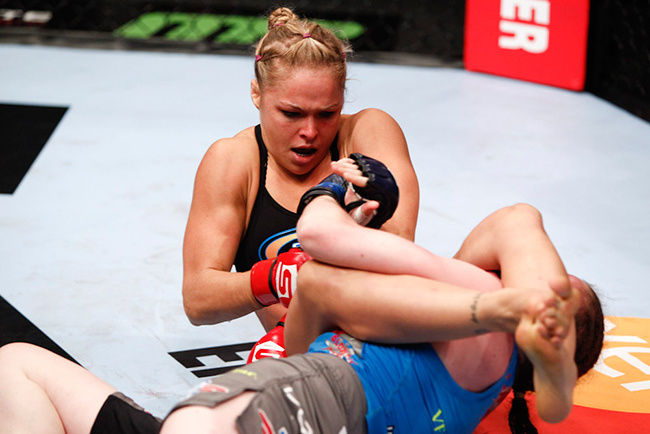 The story of Ronda Rousey isn't really about her beauty. If anything, her image is a smokescreen that slightly mollifies a fact that some fans of MMA are visibly shaken by: Women are extremely suited to fighting, and watching them compete can be just as compelling as watching men. The “fairer sex” can be athletic, effective, and devastating in combat sports. Also, in most ways that matter, women are probably tougher than we are.

I definitely got that feeling recently during a phone conversation with Ronda’s mom, Dr. Ann Maria Rousey DeMars, who, apart from being a former world judo champion (who used to wake her daughter up to practice her now-signature armbars), a partner in a software company, and an author, and having several advanced degrees, is a solid charmer who gives her strong opinions quite freely. As our conversation progressed and she casually mentioned a judo world tournament that she was unable to compete in because she was too busy having a baby, I couldn’t help but think that all men are pussies, that you aren’t that tough unless you’ve lain down, passed another human being out of your body, and then fought at an elite level.

Still, when I asked DeMars whether her black belt meant more to her than her Ph.D. she said, “To me, the Ph.D. meant more, because — I used to tell Ronda all the time — I’ve got a gold medal from the world championships and a Ph.D., and one of them makes it possible for us to live in Santa Monica. And it’s not the medal … I loved doing judo, it was great, but it was never going to be my entire life. Getting a sixth degree black belt was fun, but it’s the difference between something that’s your avocation and your vocation, I guess.”

History repeats itself in what seems more like a spiral than a line, and it is shaping up to do so tomorrow night, when Dr. DeMars will watch her daughter raise the profile of women’s MMA through the roof. Perhaps she'll notice parallels between Ronda’s experience and her own, competitors in two related-but-not-identical sports that have been reluctant to give women competitors their due.

“In a lot of ways, the state of MMA now kind of reminds me of how judo was when I was competing,” DeMars says. “It wasn’t an Olympic sport, so we didn’t get into the political B.S. of ‘you’ve got to do this, you’ve got to do that.’ In some ways we were under the radar of all the political nonsense, and because of that, a lot more we got to fight. We didn’t have people coming around pretending that they were interested in us because it could help them get a shot at being an Olympic coach or whatever. People that came around were interested in helping us because we were serious athletes. There’s that part of it, and there’s also the part of trying to prove yourself when people say you shouldn’t do it.  Ronda has put it very tactfully: ‘I’m highly motivated by spite.’ When people say you can’t do something, then you do.”