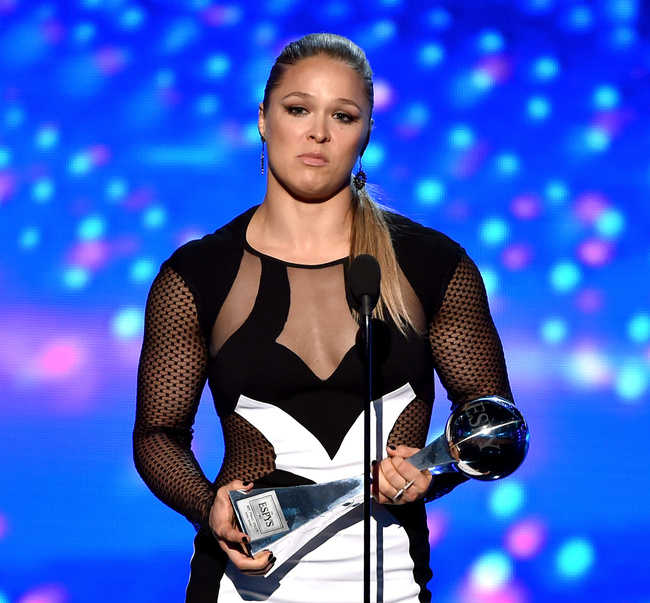 The postman always rings twice. A Lannister always pays his debts. And Ronda Rousey always gets her revenge. Eventually.

And that’s exactly what went down on Wednesday night. After winning the ESPY for Best Fighter, the undefeated UFC Women’s Bantamweight champ took a moment to burn her fellow nominee, Floyd Mayweather Jr., on live television. “I wonder how Floyd feels being beat by a woman for once,” Rousey said on the red carpet, referring to the boxer’s history of domestic violence. “I’d like to see you pretend to not know who I am now,” she added before delivering one of the better shit eating grins the world has seen in quite some time.

Yesterday, the champ told Fox Sports’ America’s Pregame show that she’s been saving that shot up for the past year, ever since Mayweather claimed not to know who she was before last year’s ESPY Awards. “It was a real subtle and snarky jab at me. I was actually nominated for ‘Best Fighter of The Year’ that year with him. So I know he knew who I was. He actually has MMA fighters signed to him so I know he knows who I am,” she said. “I was just sitting there on the couch one day, post surgery, my leg just got operated on, and I was like ‘okay, I’m patient. I’m going to get you at the right time. And you’re going to say ‘maybe I shouldn’t have said that about that chick.’”

Rousey went on to say that, if she hadn’t won the ESPY this year, she would have been willing to wait another year for the appropriate opportunity to present itself.  “I would have waited for the right time to remind him that he shouldn’t mess with me. I would be interested to hear him pretend that he doesn’t know who I am now.”

While many suggested that Rousey’s dig at Mayweather was hypocritical in light of her recent friendship with Mike Tyson, another boxing legend with a dark past involving violence against women, the fighter actually believes that her new buddy could be a good role model for Money. “Mike is a great example, where he was put on so much effort over the years to better himself as a man. He’s owned up to the things he’s done. He’s denied the things that he hasn’t done. He paid his debt to society and almost lost everything for it. I admire that kind of effort and humility out of Mike just as much as I admire his fighting. He really gained my respect as a man. I really hope that Floyd Mayweather grows up to be like Mike Tyson.”

We Forgive You Floyd: Boxing's Bad Boy Apologizes to Ronda