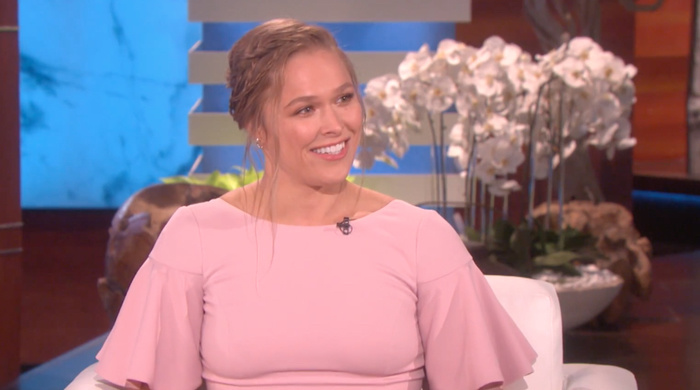 It’s been a long, quiet year for Ronda Rousey, and for us. For several years there it felt like you couldn’t escape the women’s MMA pioneer. Everywhere you looked—in the cage, on TV talk shows, even in the movies—there she was: a one-woman ambassador for MMA, a promotional whirlwind, the sport’s first true crossover star, the Chosen One taking the much-maligned mainstream. Then, last November, she got knocked out by Holly Holm, losing her belt and her air of invincibility in the process, and it was like a light went out. Aside from the occasional confessional interview or Hollywood red-carpet appearance, Rousey maintained radio silence and retreated into something like normalcy for 365 full days. One doubted if we would ever see her again in the Octagon. First we mourned and eventually we adjusted to life in a post-Ronda, McGregor-dominated world.

This morning, though, the old world seemed to snap back into place. There was Rousey on the couch of her favorite daytime television show, The Ellen Degeneres Show, chatting away about her love life and her Hollywood knitting club (part of what the former champion calls her “apocalypse plan,” because if you can’t knit when the end of the world comes, “How are you going to get clothes?”), and her preparations for her long-awaited comeback fight against current women’s bantamweight champion, Amanda Nunes, at UFC 207 on Dec. 30, preparations that include climbing trees. Just your typical lighthearted early-morning talk-show banter between a stand-up comedian and a professional cage-fighter.

Ellen even showed the crowd Rousey’s name on a two-page ad in this morning’s New York Times listing off the hundreds of people, places, and things Republican presidential nominee Donald Trump has insulted on Twitter since declaring his candidacy. “Not a nice person!” Trump wrote about Rousey last November, which would seem to fall way on the civilized end of the Trump insult spectrum until you realize that the real estate mogul—and, it bears repeating, presidential nominee of the Republican Party—sent out the tweet less than 24 hours after Rousey’s heartbreaking loss to Holm. “Glad to see that @RondaRousey lost her championship fight last night,” the rest of the tweet read. “Was soundly beaten.” That’s more like the Donald we’ve come to know.

But being on a list of Trump enemies is hardly news at this point. What was news, however, was Rousey’s announcement that her fight with Nunes will be one of her last. At the tender age of 29, but after six years as a mixed martial artist and an entire lifetime as a fighter, Ronda said she’ll be calling it quits sooner rather than later.

“Not that long,” Rousey responded after Ellen asked how much longer she’ll be fighting. “I’m wrapping it up. This is definitely one of my last fights. Everybody better watch because this show isn’t going to be around forever.”

What makes Rousey’s announcement particularly newsworthy is the spirit in which it was made. If it had come the last time she was on the Ellen show, not long after her knockout loss, when she admitted to going through an existential crisis and even having suicidal thoughts, we probably would have written it off as part of the post-traumatic recovery process. But this morning she appeared happy and bright and full of life. She was “beaming,” as Ellen put it. Gone were the breaking voice and the joyless countenance, in the past were the tears and debilitating despair, replaced by the morning talk-show brightness of a woman declaring to the world with a clear head that her rebirth has come just in time for the end of her career. Strange timing, you might say, for a resurrection, but after years in Hollywood, after countless dominating first-round victories, and after suffering one of the most famous knockouts in the history of MMA, Ronda Rousey has learned a thing or two about making an exit.

Never the Underdog: Despite Year-Long Absence, Rousey Expected to Win at UFC 207