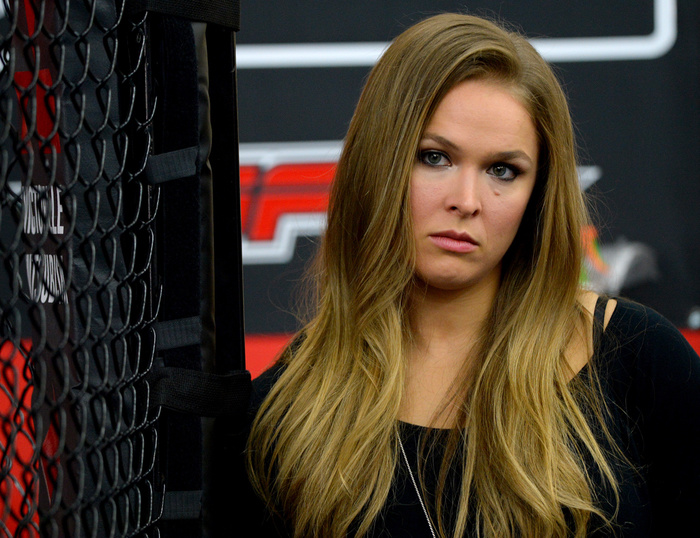 Although her future in the UFC is still largely unknown—outside of some idle speculation on the November Madison Square Garden show—and her acting career might be stalled at the moment, there is at least one more thing we know for certain about the next phase in Ronda Rousey’s life and career: she’s getting into the production business.

Lifetime announced its 2016-2017 development slate yesterday, and Deadline reports that there were three intriguing high-profile collaborations at the top of that list: Serena Williams, Janet Jackson, and the former UFC Women’s Bantamweight Champion have all signed on to develop films with the women’s cable network. Tennis legend and Lemonade supporting star Williams will be executive producing a movie about an annual dance-off competition that she throws with her sister, Venus. Ms. Jackson (if you’re nasty) is executive producing a based-on-a-true-story picture about Prohibition’s only female gangster called Queenie. Rousey has signed on for three as of yet unspecified movies in a deal “to bring stories that reflect her passions about empowerment to the screen.”

Granted, on paper, this sounds about as well-meaning but empty a gesture as every other random Hollywood bigwig talking up the importance of “Strong Female Characters” in their products, but I’m holding out hope for two reasons:

1. If you haven’t been paying attention lately, you might still think of Lifetime as a frivolous corner of the cable-verse where women are constantly in peril thanks to made-for-TV movies like the infamous “Mother, May I Sleep With Danger?,” but the station has come a long way from its pandering kitsch roots. As BuzzFeed’s Laura Goode so expertly charted in her longform piece “How Lifetime Became One Of The Best Places In Hollywood For Women,” the network has evolved into a home for critically acclaimed programming that features some of the most fascinating and complex female characters on TV, often made by some of the most fascinating and complex women in the business. (They are also, apparently, making a lesbian vampire remake of MMISWD with James Franco, but that’s another story entirely.)

2. Ronda Rousey is one of the more fascinating and complex women we’ve seen on TV in any capacity in the past few years, which might actually make her a perfect fit for the network’s new direction. For anyone who was really paying attention to her polarizing reign in the sport in general and the UFC in particular in the earlier part of this decade, Rousey was, for a while, second only to Breaking Bad’s Skyler White in terms of the responses that she inspired in audiences. Like the fictional Skyler, Rousey on the rise was far more complicated than most other women were—or were allowed to—be on screen. She was neither hero nor villain, but was often treated as both simultaneously, and for reasons that were and weren’t fair. Yes, she was a frustrating face for women’s MMA, with a white feminist bent that left many of the women who wanted to support her frustrated and shut out from her vision of empowerment. But she was also hated for taking up too much space in a male-dominated—and formerly male exclusive—world, criticized for being too cocky, too brash, too publicly emotional, too strident, and just generally too much for MMA, which made her almost as exciting as she was infuriating. Even if she herself became harder to support as fame exposed the cracks in her public persona as surely as Holly Holm’s hands and shins exposed the holes in her fight game, the very existence of her remained remarkably compelling. If even a shred of that finds its way into these reflections on her passions, they could make for watching every bit as exciting as current Lifetime programming like Sarah Gertrude Shapiro and Marti Noxon’s current work of genius, UnREAL.

On the other hand, there is also the possibility that these three movies will turn into empty and alienating rah-rah gestures of sub-girl power “empowerment” in the Do Nothing Bitch vein. But if that happens, maybe Shapiro and Noxon will eventually write a barely-disguised behind-the-scenes comedy/drama about the problems of producing basic Strong Female content with a woman who is, for better and worse, so much more than that.

Ronda Rousey 2.0: The Queen Of All Media