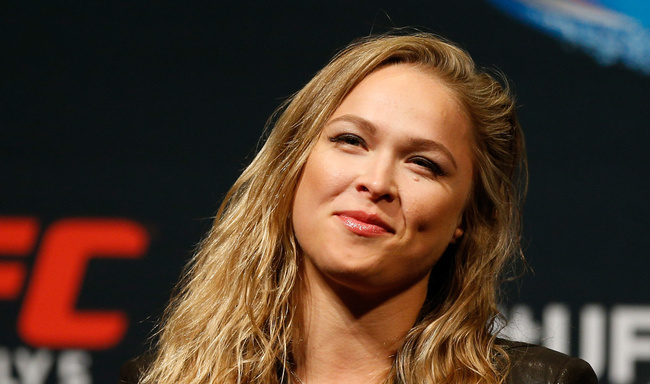 I saw Ronda Rousey in the Venetian by chance, standing on a small stage underneath a fake sky, fielding questions about judo in garbled Cantonese-inflected English. She answered the same way she would have answered at a press conference anywhere, despite the fact that not a word made it to the two or three dozen Chinese tourists crowding the small stage, filming with their phones. This was in the Grand Canal Plaza, an indoor facsimile of the canals in Venice, and the cries of a thousand people echoed around us. In the background, a video of Ronda destroying girls was on TV loop.

Tourist A: Who is that? Is she a movie star?

Tourist B: I think so.

Tourist C: Yes, she is a movie star, she was in the Expendables 3.

By the TV, I saw a group of women trying to reconcile Ronda’s scowling face with the dolled up blonde on stage, smiling and waving. The little speech took all of ten minutes, and then Ronda was hustled off again. Q&As, photo-ops, a special premier of the Expendables 3. She’s at the weigh-ins, the red carpet entrance, and she’ll be ringside Saturday night for UFC Fight Night 48, as Dana’s special guest. Ronda is one of the most marketable and—although perhaps not necessarily in Macao—most recognizable faces in sports: after Macao she heads to Mexico City for the TUF: Latin America Finale in November, and then to Brazil after that.

“I feel busy and useful and productive,” she said. “I don’t have any fights coming up, I don’t have any film projects right now, I’m coming off of surgery so, whatever I am physically able to do I am going to find a way to work. If I’m not able to do a couple things physically, then at least I can do some promotion and make myself useful.”

“My mom taught that to me when I got my first ACL surgery. two weeks after the surgery she made me go out onto the mat and start doing push-ups, you know, she said ‘your arms are working,’ just because you had surgery doesn’t mean that you are dead.”

This little tour through the UFC’s emerging markets comes at a special moment for Ronda. She just won an Espy, her latest movie is out, and this along with a super-hot SI shoot and coming on the heels of her most dramatic victory, a 16-second gif of a fight with Alexis Davis. She’s been famous for a while now, but her star is taking a new trajectory right now. Ronda is finally starting to get a bit of love.

“It kinda reminds me of like WWE, I am a big WWE fan and I always loved the heel,” Ronda told me. “And what I loved was when someone was so good at being the bad guy, that the fans love them anyway. They’ll show up to a city, and they’ll just start insulting everybody and their insults are so clever and so well thought out and delivered that the fans will cheer for them anyway. I always thought that was so much more entertaining and took so much more skill than being a baby face and being like, Hello Philly! and everyone is like Yay, we’re from Philly! I think it takes a lot more to be able to walk out somewhere and play that bad guy role and insult everyone in the room and you do it so well that they love you for it.”

“That’s kinda why I really liked the last fight so much, because I’ve been booed my whole life. I never really expected cheers and when I started getting them I didn’t know how to receive them. And when I heard the boos that’s when I started getting a lot of motivation to feed off of, I’d be like, Oh yeah? You wanna boo me now, that really gives me so much motivation. When people were really cheering after the last fight, it was very frustrating in a different way. I love the push and pull of the fans. They love you and then they hate you, they like you for this reason and then they hate you for that reason.”

“I think it was Eddie Murphy who said, ‘you can’t let the people building you up make you feel good, because when they start to tear you down, you’re giving them the permission to make you feel bad.’”

“We’ll see how long it lasts.” 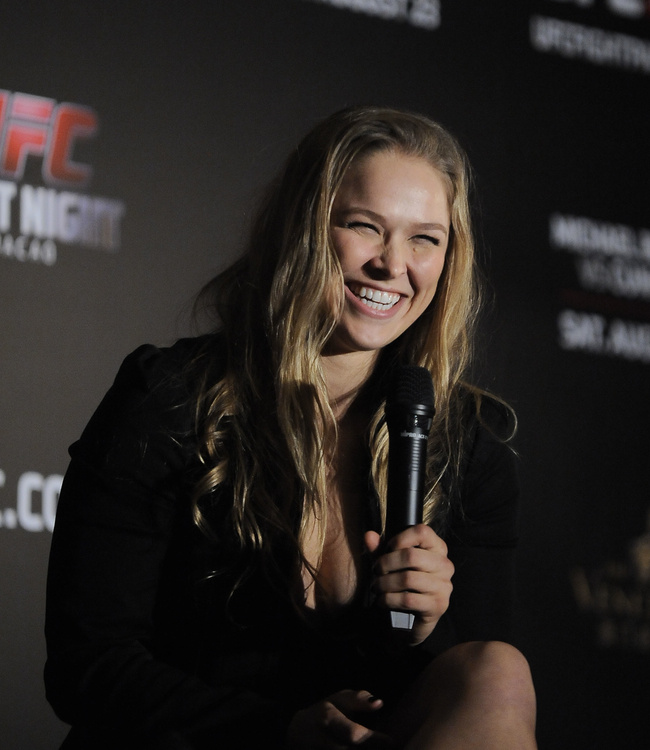 The China scene is tiny, and several events here have featured more reporters than fans (and less than a dozen members of the media at that). But the UFC and the Venetian have given it their best shot. LED screens all over the maze of shops, hotels, and casino floorspace feature the promo video... I’ve already heard Mike Goldberg yell out OH! a thousand times... and a public workout attracted a lot of gawkers.

Most of the time the Chinese wandering around the Venetian have no idea what they’re looking at when a UFC promotional event goes down, but when Ronda steps onto the stage, flashing a big smile in high heels, low cut dress and a fighting pose, everyone—from grannies down to toddlers—let’s out an audible sigh. A beautiful blonde woman who can kick some ass is something anyone can snap a shot of and share on social media. It’s ironic that Ronda may have a greater impact on the China market than Cung Le, any of the Chinese fighters, or any other event could have. And she knows it.

“I think this is a huge market, a new frontier, and not just for the UFC but for movies too,” she said. “Fighting is one of the sports that is not isolated to one region, it belongs everywhere and China, Hong Kong, Macao, these are some of the areas I really want to focus on next.”

China’s movie industry might actually be the UFC’s avenue into the market. China’s box office receipts are soaring—Transformers killed it here; Avatar killed it—and Ronda’s brand of action will probably get little flack from the ornery Chinese censors. Will acting get in the way of fighting?

“I think it actually makes fighting more appealing to me because I don’t have to fight,” Ronda said. “I fight because I love it and I want to. And I have more motivation than if I had to fight back to back to back. My fight career would be much shorter if I didn’t have the acting career to go back and forth to.”

For now, Ronda is just doing the legwork in Macao and Hong Kong while she waits for an opponent to lock her in to a card (hopefully the Jones—Cormier card in January, she said, and the best fight would be Gina Carano).

Any free time in Macao?

“I don’t really know what I am doing for the rest of today, let alone later on. They just tell me where to be and then I show up and just try and own it.”

“That was the one thing that Dana said I had to do, so he charged himself with showing me around, but I don’t know. I’d love to.”

Bruce Lee was a dancer, can you dance?

“Not when people are watching me. I dance alone, naked in my living room. That’s the only time I dance.”

And with that image in your head, Ronda’s out, stage left, to the next stop on the tour.