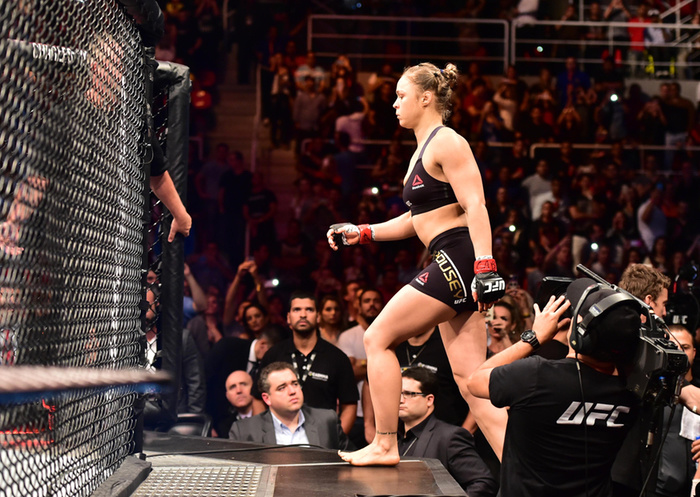 When Ronda Rousey returns to MMA on Dec. 30, the former women's bantamweight champion revisits a division that's been turned upside down since she left it behind. Back then, the biggest problem was finding another 135-pound female who could make Rousey bleed before she hyperextended their arm or pounded their face in, usually in the first round and often in seconds. Her savagery became an existential concern: if Rousey defeated all the credible challengers at her weight, the scaffolding that held up every woman in the UFC—not just her—might come tumbling down.

What a quaint memory. It's been 11 months since Holly Holm head-kicked Rousey into hiatus. But instead of the coronation of a new queen, Holm's win and Rousey's defeat inaugurated chaos at 135 pounds. Holm lost the belt to Miesha Tate in March, then lost again to Valentina Shevchenko in July. Tate gave up the belt to Amanda Nunes in the main event of UFC 200. No champion since Rousey has managed a single successful title defense.

Yesterday, the UFC announced Rousey's return at UFC 207 against Nunes for the title. And after 13 months away from the fight game, Rousey's reliability and consistency—traits we took for granted—only look more impressive now that the kingdom she once ruled with an iron fist has descended into anarchy.

It's understandable to see Rousey getting a title shot off a loss as the latest iteration of the UFC's money-over-everything strategy, where celebrity and pay-per-view buys trump merit when it comes to booking fights. After all, Rousey fell just as her celebrity peaked: an off-the-cuff rant about her physique and "do-nothing bitches" made her a mainstream feminist hero and turned UFC 190—a forgettable undercard headlined by Rousey and Bethe Correia—into part of the promotion's 2015 pay-per-view resurgence. Her love life became tabloid fodder and she broke into morning shows parents turn on while hustling their kids out the door. For UFC 193 in Australia, Rousey carried the PR load. Holm was a massive underdog, uninspiring in her two previous UFC wins and showing nothing to suggest she'd surmount Rousey let alone survive. Holm was the champion boxer, but Rousey was the one on the cover of The Ring magazine.

Then Holm mauled Rousey, escaping her armbar and bloodying her face and Cro Cop-ing her in the head, and everything changed. The pendulum swung from "she's unbeatable" to "she's always sucked." Rousey had been so publically outspoken and abrasive that fellow fighters, Twitter eggs, and moralists like Donald Trump all tweeted their joy at her defeat. She shied from the spotlight and told Ellen Degeneres she'd thought about suicide after the loss to Holm. She suffered injuries that sidelined her for months, and she endured online criticism meant to strike at her deepest insecurities. Whether she'd ever return to the sport that gave her everything and then took it all away was an open question.

We used to wonder if women would survive in the UFC after Rousey, but in the last 11 months, women's MMA found its own momentum. Strawweight champion Joanna Jędrzejczyk has the aura of invincibility that Rousey carried circa 2014. Cristiane "Cyborg" Justino, Rousey's 145-pound nemesis, made two one-sided catchweight wins in the UFC during Rousey's sabbatical, and an audience that used to write her off as irrelevant because she was outside the Octagon now reckons with her claim to being the best female fighter of all time. The Rousey-less bantamweight title fight between Tate and Nunes headlined UFC 200.

Upon hearing the news that Rousey was returning with a title shot, Julianna Peña—a former TUF champion who's 4-0 in the UFC, a record that puts her in title contention—told MMA Fighting that it was "bullshit." "She's literally the worst fighter on the roster, and I can't stomach the fact that I'm not getting the title shot," Peña said. (Cyborg echoed her sentiments.)

After abusing the word "literally," Peña added that she’s considering leaving the UFC in protest. "Maybe I'll go fight for Combate [Americas] or something because it sounds like they want to pay me serious money and actually give me a belt right off the bat just like they did with Ronda in the UFC," Peña said. "They just handed Ronda a belt and Combate will hand me a belt, so I don't know, we'll see how that goes."

Rousey's belt wasn’t given as a favor though: she’d already won and defended the women’s 135-pound belt in Strikeforce, and she kept the title when the UFC absorbed the promotion and the roster of fighters she would have fought anyway. The situation was no different when the WEC merged with the UFC and Jose Aldo and Dominick Cruz became the champions of newly established UFC divisions. And lest we forget, Rousey's Olympic bona fides, an authentic talent for drawing attention, and an instinct for armbars pried open the door for women in the UFC in 2013, long after Dana White said he'd never add them to the roster.

But gratitude is a crappy reason for a title shot, so let's look at Rousey's record: 12 straight wins before her loss to Holm, including seven straight title defenses (including her time in Strikeforce). Rousey should rematch Holm eventually; the reason she isn't doing it now is because Holm, like Tate, couldn’t defend her title. With the exception of Nunes and Peña, who each ride four-fight win streaks, no one else near the top of women's bantamweight even has consecutive wins in their recent body of work. For all her indignation, only Peña's last two wins—both decisions—have been over recognizable names.

While Dana White said a win over Nunes would pave the way for a fight with Cyborg, no one would be surprised to see her end her fighting career on Dec. 30—especially with a loss to Nunes, whose heavy hands could leave her staring at the lights if she shows up looking like she did against Holm. Even with a win, she has the option of permanently fleeing fighting for movies or another violence-free career that probably pays better and probably demands less.

Ronda Rousey isn't a celebrity walking into a circumstance she doesn't deserve. Before the women's 135-pound belt became an ornament that seemed like it could go home with anyone on any given night, she was the division's organizing principle and stabilizing force: the merits of everyone else were judged relative to hers. Now, she'll be judged against everyone else.

Amanda Nunes Is Dead-Set on a Fight with Ronda Rousey, and She Might Just Get It