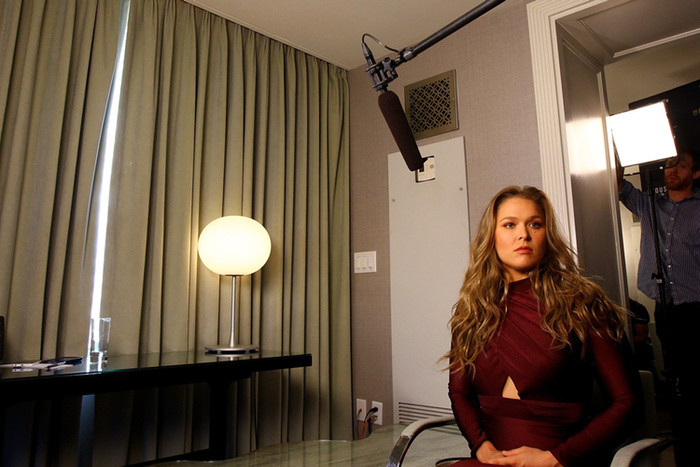 Earlier this week, LatiNation released a pair of short clips that featured Ronda Rousey’s mother, Dr. AnnMaria De Mars criticizing her daughter’s longtime coach Edmond Tarverdyan. Earlier today, the whole 31-minute interview went live and while it provided some more context for what De Mars was saying, the gist of her argument remains the same: she believes that he is a “terrible coach” and a “bar person.” She thinks that he “hit the lottery when Ronda walked in there,” and exploits his connections with her for business. Which is something she finds particularly rich considering how little respect and interest Tarverdyan showed Rousey when she first approached him.

"She was winning before she ever met him. She probably won 99 per cent of the judo matches she ever fought in. She won the judo worlds when she was 17. She got a bronze medal in the Olympics. She got a silver medal in the world championships," De Mars said. "She was one of the top athletes in the world when she walked in there and he wouldn't even give her the time of day for months."

She also took Tarverdyan to task for the way he treats women, and said that “I would run him over with my car if there wasn't a law against it."

This is just one of the many Rousey-related news (or “news”) items that came out this week. Other items include Travis Browne’s confirmation that he and Rousey are together (and the subsequent discussion of whether or not Rousey, who has been outspoken about domestic violence, is hypocritical for being together with a man who has been accused of assaulting his wife in the past), and a clip of the champ training in a Pikachu costume. In previous weeks, we also learned that the head of Marvel has acknowledged and commented on Rousey’s campaign to become Captain Marvel, and that Justin Bieber was once rude to Rousey’s sister.

The seriousness of the business involved in any of these stories is debatable. Sure, given that De Mars played a significant role in her daughter’s early success as an athlete, her views on Rousey’s current coach should carry some weight, but the rest of the stories have little direct impact on Rousey as an MMA fighter. And yet I’m hesitant to dismiss any of the above as completely meaningless gossip. Because even when I’m not interested in what is being said about Rousey, I’m intrigued by how it’s being said, and the fact that it’s being said at all.

While gossip is often dismissed as meaningless background noise, or as a distraction, some experts argue that it actually plays a significant role in society and group dynamics. As David Sloan Wilson, a professor of biology and anthropology at the State University of New York and Binghamton told the New York Times in 2005, “...gossip appears to be a very sophisticated, multifunctional interaction which is important in policing behaviors in a group and defining group membership."

When and how people from within the MMA community gossip about Rousey can tell us a lot about how people within that community feel not just about Rousey, but also about women in the sport, and the increasing mainstream attention that a crossover star can bring to a culture that is still somewhat underground in the grand scheme of things.

And the way that the outside world—from outlets like Time, Jezebel, and Esquire to the film industry—talk about her can also give us some insight into how other people perceive both Rousey and her sport.

In reporting on and discussing all of the minutiae of Rousey’s life and work, what we as media members and fans are doing (in addition to benefitting from the attention that a Rousey story always generates) is trying to define what intrigues us so much about a certain person, what intrigues us about MMA, what we want our athletes to be like, and what we want our stars to be like.

It’s not unlike what hockey fans faced when Wayne Gretzky became, for a period of time, so much bigger than his own major, but not-quite-mainstream sport. Suddenly, The Great One became not just a point of interest to hockey fans, but to people who had never thought about the sport much at all. He became a sensation not just on the ice, but in all walks of his life. Somewhat inexplicably, he briefly became SNL host material and a soap star, appearing on The Young and the Restless (if you think Rousey’s acting is unrefined, you should see how truly abysmal Gretzky’s performances are). And the reporting on him wasn’t much less ridiculous than a Y&R plot. Speculation about his private life and his marriage to actress Janet Gretzky was rampant. His move from the Edmonton Oilers to the L.A. Kings was almost a national crisis in Canada.

It was still a more tempered version of what we’re currently seeing happen with Rowdy and MMA, both because women are always judged more harshly and because Gretzky’s ascent happened before the full-blown force of the internet came into effect, but the push and pull between serious sports and ostensibly flightier entertainment coverage remains the same. Hockey survived it—NHL reporting wasn’t destroyed by the occasional gossip item, and hard reporting, analysis, and more fun stories seem to coexist at least somewhat peacefully in that world—and mixed martial arts will, too. We might even learn something from it in the process. Even if that something is just not clicking or commenting on things you don’t care about.

MMA Couple Alert: Ronda Rousey and Travis Browne are Seeing Each Other