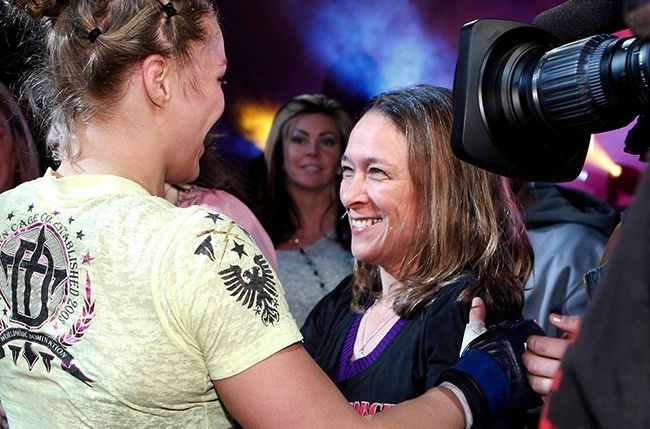 Last week, Fightland posted an article that asked whether UFC bantamweight champion Ronda Rousey would be able to channel her all-consuming spirit for competition--her greatness--into her post-fighting life. A conversation about how Rousey was “built” inevitably touched on the fighter's mother, Dr. AnnMaria DeMars, the first-ever American judo world champion and Ronda’s guide through the world of competitive martial arts. The article discussed DeMars’ controversial parenting style, and questioned whether it could contribute to Rousey struggling with her eventual, inevitable failure at achieving perfection.

In an act that is very, well, “Rousey” of her, De Mars was the first person to comment on the article, issuing a polite yet firm reply.

But a comment box doesn’t really cut it in terms of fair representation, so Fightland called DeMars yesterday to talk about her comment, the public perception of her parenting of Ronda, and her take on being a mother and coach of a world champion in the making.

Fightland: Can you tell me more about your comment? Why did you feel the need to respond to our article?
AnnMaria DeMars: I thought the author posed a very legitimate question: When you have people who are focused on being the best in the world, what do they do when they’re done? Having been a world champion myself, having lots of friends who were competing at the world and Olympic level, that’s a fascinating question, and people try that in a couple of ways. And one is what I think Ronda has done and other successful people have done, which is taken that drive and competitiveness of being the best in the world at something and applying it in another area. When I finished competing I got a Ph.D. and now I’ve run a couple software companies and I think that those skills I developed are really helpful now. Which is what Ronda’s doing. People are telling her, “You can’t do this and you can’t do this,” and she’s gone ahead and done it anyway. Now that she’s gone into the movies maybe she’ll go do something else that people told her she couldn’t do.

So I think you can go in two directions. You can go the pathological way, where for the rest of your life you have this narcissistic view of yourself. I’ve seen people like that--they leave competition and enter the workplace and expect everybody to bow down to them. Or you can take that same work ethic and that same unwillingness to compromise and be successful, and be successful in other areas.

I remember hearing Ronda saying that after the Olympics there was a time where she didn’t know what plan B was. Did you play a role in her figuring out what the next thing would be?
I don’t know. In a way, maybe. She started bartending for a while. She was like, “I want to try for a regular life. I want to get a dog. I want to get a car. I want to get my own apartment.” So she tried that for a while and she got pretty bored. And I really wanted her to go to college. She did some college classes and she did fine. But she didn’t really find something she was passionate about. Everybody said she dropped out of high school. Well, that’s not true. She took her GED and then took college classes. But that didn’t do it for her.

And then she was talking to the Coast Guard about becoming a rescue swimmer and was considering that. And then she was going to try MMA because her and (UFC featherweight) Manny Gamburyan and (former UFC welterweight) Karo Parisyan had been friends since the time they were little. And I told her it was the stupidest idea I’ve heard in my life. I might have been helpful in encouraging her to try different things but, as far as the MMA itself, initially, I told her it was a completely stupid idea. I’ve changed my mind about that. Ronda can never hear me say this enough: She was right and I was wrong. It was a good choice for her to not make the run at the 2012 Olympics and go into MMA. It provided her with a career path. She’s gone into the movies and done stunt work and she’s making money at MMA and doing a lot of good stuff.

Yeah, it’s difficult. My little one plays soccer and I don’t know anything about soccer so I can just scream and tell her she’s fantastic. I don’t tell her anything to do because all I know is she’s a defender and other people try to get by and kick the ball in the goal. Now she’s not competing at the top level. She’s playing high school varsity. It’s different. If you’re competing to be an international athlete and you really want to beat everyone in the world, you have to do things other people don’t do. And that means if you’re hurt, if you’re sick, if you’re having a bad day, you still go out there and try no matter what. And that’s hard to do when you’re a kid. You want your mom to say, “Oh, you poor baby! Your coach is so mean! Have some chicken soup. But if your mom is being coach, instead of saying, “Have some chicken soup,” she’ll say, “Get your ass off that couch and go run because all of your competition in Europe is running right now.” It’s really difficult.

On The Ultimate Fighter, Ronda said that she didn’t feel your support at times. But over time she grew to understand where you were coming from. How do you know when to express support and when to hold back?
Well, I think as a parent or a coach I try to explain why I’m doing things. So you may not agree with it but at least you understand. I remember one time with Ronda when she was at the Junior Olympics, this girl and Ronda were on-again/off-again rivals, and Ronda beat this girl last time. And it was the Junior Olympics and Ronda had the flu, and I made her fight anyway. She ended up coming in second. She was so mad at me, and I said, ”Look, some day you might be at the Olympics and you might be sick. You might have to suck it up and fight. You came in second on a day where you were sick. That shows what you can do. Now you need to train a little harder.” She cried. She was mad. Years later she was in competition and she was sick. She had mono. And I said look, “Remember that time you were in the Junior Olympics and you fought anyway? You were sick and you got second place. Well now you’re bigger, better, stronger, tougher. I’m sure you can go out and get first. And if you can get first in an international tournament on a day when you have mono, you’re the baddest person on the planet.” And she did it. So I think when you’re older you connect the dots and see, “Oh, this is why my mom did this--not because she hated me and wanted to ruin my childhood.”

Ronda also said on the show, “She could build you up higher than you’ve ever been before but she could tear you down and make you feel like the biggest piece of shit ever.” What were you thinking when you heard that?
I spent 14 years competing in a sport where people could legally choke me unconscious and break my arm. I’m not terribly oversensitive (laughs). Ronda and I, like any mother and daughter, have certainly had our very, very great disagreements. There’s been times when I told her, “Low self-esteem is not going to solve it. If you feel bad about yourself it’s because you’re not doing what you should do.” I’ve said things like that to her, which obviously did not make her feel good, but I was not put on this earth to be my children’s friend. My job is to be their mom, and sometimes your parents need to tell you, “What you’re doing is not right. You can’t act like that. You can’t talk to people like that,” or, “Your friends may tell you you’re great and you may think it’s okay if you go out drinking, but, you know what, you’re not going to go to that party because it’s not okay.” So, sometimes, when she was younger she did things she shouldn’t have done and I called her on them. And then you learn.

Where should the ethical line be drawn? What comes before being a world champion? What is going too far?
You don’t cheat, you don’t do anything damaging to your child. Anything that’s unethical. You teach them to be a good, right person. And also you don’t want to do anything that’s not in their best interest. For example, when she tore her ACL she was supposed to compete in her first Junior Nationals. I took her to an unbelievably good surgeon. He patched her up. A few months later there was a Junior U.S. Open coming up. It would have put her on the Junior Pan American team and the Junior World team after that. The doctor said she’s not ready to fight. So I said, “That’s it: You’re not fighting.” So I think the ethical line for your child is you do as best as you can determine what’s best for them. And what’s best for them is not doing anything that’s injurious to your health. Competing when you have the flu isn’t going to kill you. Competing when you have a torn ACL and you might tear it again is stupid. It’s like the Hippocratic Oath: First, do no harm. So I think that’s an ethical line. I think also trying to bring your child up to be a good person, as I think, hopefully, every parent that’s not pathological tries to do. It doesn’t matter if you win; you still have to be kind to other people. It doesn’t matter if you win; you still have to handle your responsibilities.

In your comment on that first Fightland piece you referenced your other kids and how all of your children, in their particular way, have found success. How would you feel if one of your children adopted a lifestyle that didn’t put much emphasis on accomplishment or success? Would that be okay with you?
I think that depends on what they decided to do. Jennifer is a history teacher. It’s not like being a world champion or making millions of dollars, but it’s what she wants to do. She’s good at it. She’s doing a great deal of good in the world. I’ve told her before, “Probably, out of everyone in the family, you’ll have the most impact on the world.” Lots of people remember a teacher who made a difference in their life far more than somebody who’s on TV--no disrespect to Ronda. So, I think it’s fine. I’d say whatever they choose to do with their limits.

The thing that always makes me laugh is when people say, “Oh, Ronda, Ronda this, and that’s why Ronda’s like that.” You know, I have three other kids. And they’re not all the same.