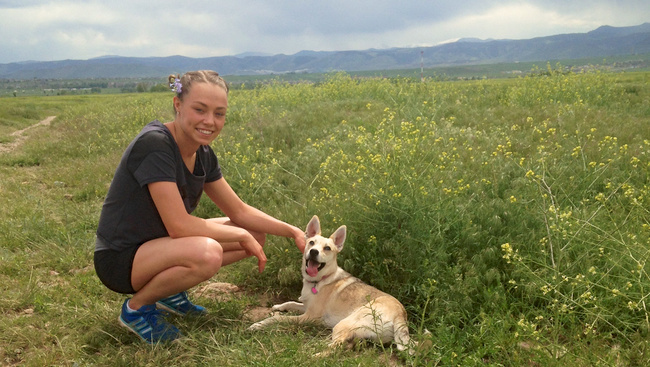 Rose Namajunas is not worried about losing herself in the stress of The Ultimate Fighter house, even if some twenty-one-year-olds would swoon at the idea of reality show fame. “Thug” Rose Namajunas wants only to fight, and to represent the many coaches she worked with along the way. Rose recently moved to Denver, Colorado, from Minneapolis, Minnesota to train with legendary striking coach Trevor Whitman and prepare herself for the 20th Season of TUF. When she is not in the gym, Rose soaks up the Colorado sun and enjoys the gorgeous spring weather. Like every Coloradoan, Rose is smitten by the beauty of the Rocky Mountains and the numerous activities that the landscape provides during the warmer months.

I met Rose and her boyfriend, professional kickboxer and UFC veteran Pat Barry, at an open air, off-leash dog park with a phenomenal view of the mountains at the edge of the foothills. The weather was overcast, which can be a blessing in the intense sun of the Mile-High city. As we walked, Pat threw a ball for their 10-month old puppy, Mishka, frequently interjecting funny stories and anecdotes about Rose. We discussed the move and Colorado weather while Mishka sprinted after the tennis ball through the tall grasses.

“The training out here is spectacular. Trevor Whitman is unlike any coach I’ve ever had. He doesn’t rely on intimidation tactics. He creates a bond with you, and he really gets to know you and respect you. It is a respectful relationship. It is not like ‘I work for my coach’ or ‘he works for me,’ we have a relationship. I feel like in the past, people get into positions of power and… you know? But he doesn’t do that. And that is what brought us out here. But also the outdoorsy culture.”

Rose and Pat have been together for several years, and like many fighting couples, they met at the gym. “We just had a friendship at first and one thing led to another. We’d spar with each other, and I’d punch him in the face.” Pat later reiterated their relationship began with Rose punching him in the face while he was jumping rope. He was shocked, but that is the kind of girl that Rose is. She will do something just to see if she can, like she when pulled off a spectacular flying-arm-bar at Invicta 5. She describes her relationship with Pat as “totally compatible. We have a yin and yang element where we have so much in common, or there are certain things that we are exact opposites on. We balance each other out in that way, and it really works.”

Mishka chased the ball tirelessly across the tall grasses as we walked through the park. There are few places where pet-owners can have their dogs off-leash, and this park is perfect for their swift puppy. Pat and Rose frequently come to this park, and rarely venture into the city, except to occasionally visit concert venues in Denver. In fact, Rose is a classically trained pianist who attended the prestigious Milwaukee High School of the Arts, a magnet school designed to prepare students for careers in music, writing, theatre, dance, and visual arts. “I started playing piano when I started martial arts, so when I was five years old. My mom taught me classical piano, and when I got into high school I double-majored in classical and jazz. I’ve always loved any type of music. I like to play jazz because I am not a very good sight-reader, which is where you read the notes and then play. I was always better at listening, and then being able to play.”

“There is a fun game we do,” Pat interjected. “I’ll play any song from the radio and within a minute or two she can play it. I’ll try to pick the most ridiculous thing ever, but she can still play it.”

“The last song we played was Michael McDonald,” Rose explained, laughing, “I can’t remember the song.”

“Sweet Freedom! Pat exclaimed excitedly. He then sang a few lines in a falsetto voice.

Rose continued, “When I went to the High School of the Arts, it went from being an after school activity to doing it two hours a day. It was more serious. And it made me appreciate music more, but it also made me realize that it was not my true passion.

Fighting is undoubtedly her passion, and her profession. She still tries to make time to see live music when they can, although the partying scene is often trying. Pat commented, “Rose and I tend to not like people. Does that sound weird? We like this kind of stuff, going outside, into the sun together.” The problem is not their teammates or even most people, but rather rude fans who feel entitled to ask them absurd questions. Rose said that people have said dumb things, “Rose, how come you didn’t want to win against Tecia?” When I asked if they are often recognized when they leave the house, they both point at each other. Pat jokes, “they are like ‘Oh my god, aren’t you Rose’s bag lady?’ and I’m like, ‘Yes, yes I am.’” We stopped at an old rope swing for a few moments for Rose to swing over the parched remains of a creek. When two young boys and their mother walk up, Pat helps the children take their turn on the swing while we cheer them on from the shade of gnarled and stately oak tree. 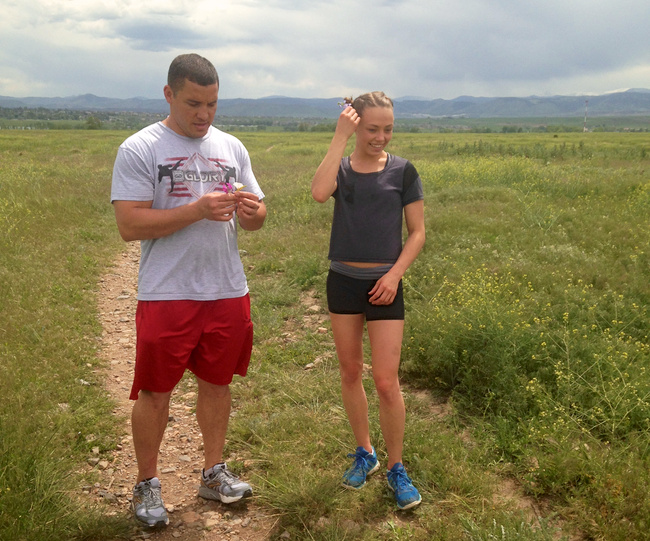 The two joke together constantly, and when we stopped for a moment to admire the darkening sky over the sharp line of the mountains, Pat picked a few wildflowers for Rose to put in her hair. “Do you know I almost got into a fight with Royce Gracie at the Tracy Lee party?” Rose asked. “This is why I need to stay out of that [the nightlife], because it is not good for me. I mean, I respect the hell out of him, but I get out of hand sometimes, too.” When Royce accidentally bumped into Rose at the party, she turned around and shoved him. He backed up with his hands up and said, “Oh, hey, don’t hit me!” “He was so nice,” Rose recalled, while Pat continued, “everybody turned around and said ‘Oh shit! Do you know who that was? That was Royce Gracie!’ Her response was ‘Who the fuck is Royce Gracie?’” “I was a little intoxicated,” Rose admitted, “but I seem to remember that Tracy told me to get everybody out of the room, so I got hard.” “Thug Rose,” Pat said, reminding me of her fight name, which did seem incongruous with her very sweet demeanor outside of the cage, although Royce Gracie may disagree.

Rose prefers to spend her time with her family whenever she can; however, the logistics are daunting because many of her relatives live in Lithuania. Her mother immigrated to the United States during the Soviet Union occupation and after Rose was born, her two grandmothers joined them in the U.S. They helped raise Rose and later moved back to Lithuania. At nineteen-years-old, she went to visit her grandmothers and to meet the rest of her Lithuanian family. “I felt like no time was lost. I felt the connection and was like, wow, this is what people mean by family matters most. I was finally able to discover that when I went back to Lithuania.”

Rose spends most of her time in Lithuania with her family, although they did see the sand dunes and the Baltic Sea. Pat also made a video of them doing an extensive obstacle course that was simultaneously fun and dangerous. But they primarily relax at her grandmother’s cottage where she grows all of her own fruits and vegetables. “She works the land all day and that’s why she’s so healthy. That’s what I want to be. When they asked us what we wanted to be in kindergarten, I always said a farmer.”

Like all grandmothers, Rose’s grandmothers specialize in feeding their hungry guests. “Pat had a game where he was going to try to eat everything my grandmother offered and it didn’t work.” Pat explained, “This woman has one pot, one spoon and one burner that plugs into the wall. I figured with just one pot, I am not going to stop until she runs out of food. I lost. I lost miserably, to the point where I was thinking that in her kitchen there has to be a conveyer belt of food. She had to be faking me. But the crazy part is that you drink water from her well. You go outside, pick an apple off the tree, lie down and take a nap.” 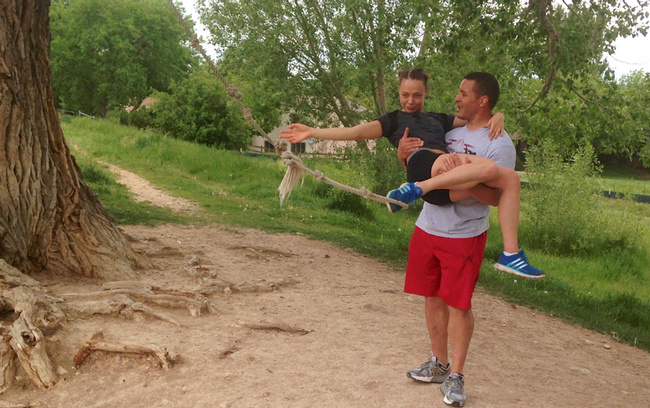 Throughout our hike, we kept coming back to The Ultimate Fighter and her excitement for the competition. The strawweight division is small, so many of the women know each other going into the house. Rose trained with Felice Herring and of course, fought Emily Kagan at Invicta 4 and Tecia Torres at Invicta 6. But Rose does not really think about the other girls; instead, she concentrates on her own training, and focuses on her personal life until she leaves next month. “It’s going to be way bigger than people even think,” Rose declared. “We all have star power to a certain extent. I mean, some people are lesser known, but a lot of us have a big fan base, maybe even more than some other UFC fighters that are dudes.”

Beyond celebrity, title shots, and contracts, Rose is a martial artist at heart. She trained various styles in her youth and started fighting before she turned eighteen. As we headed back down the trail, and the skies darkened for a typical Front-Range afternoon thunderstorm, Rose and I discussed the necessity for MMA fighters to be grounded in their art. Rose reflected, “learning martial arts isn’t always about winning a fight. It’s about expanding your knowledge. It’s a way of life; it’s not just a job.”