'Rough-And-Tumble': The Deeply Southern Tradition of Nose-Biting, Testicle-Ripping, and Eye-Gouging 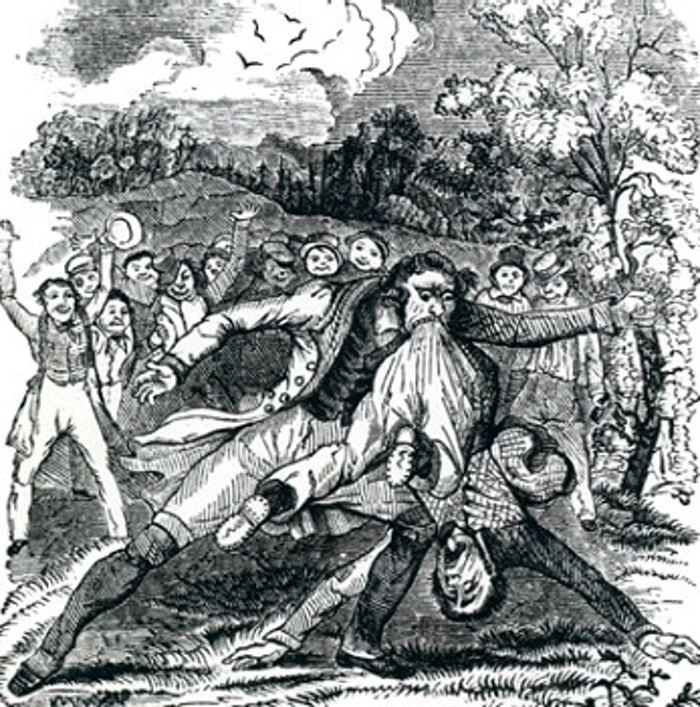 In 1806, Englishman Thomas Ashe wrote an account of his visit to Wheeling, Virginia, where he witnessed a fight between two working-class men that he would remember for this rest of his life. The men, one from Kentucky and one from Virginia, argued over who had the better horse, a somewhat standard debate in the booze-filled outskirts of small towns. Not willing to acquiesce to a difference of opinion, the men, along with the Englishman Ashe and a large portion of the town, took off to a track to test the speed of the two beasts. Apparently the race was inconclusive, but the two men, unwilling to end their feud, challenged each other to fight. They agreed to “tear and rend” rather than “fight fair.” Ashe watched in astonishment as the man from Virginia took the Kentuckian to the ground and from a mounted positioned, grasped his hair and stuck his thumbs into the man’s eye sockets. But Kentucky recovered and rolled Virginia off of him. Once on top, Kentucky leaned over and bit off the nose of the man from Virginia. But the fight was not over. The man from Virginia took the Kentuckian’s lower lip between his teeth and ripped it down to his chin. Then, the fight was over. The man from Virginia, sans nose, was carried off in victory while the Kentuckian headed to the doctor, his eyes damaged from the attempted gouging and his torn lower lip flopping around his chin.

This fight was not an anomaly, but rather a tradition of fighting that was particular to rural Southern areas of the young United States in the 18th century. ‘Rough-and-tumble’ was the name given to no-holds-barred fighting in the southeast region of the newly formed America. Betting was prevalent and rules non-existent. Contestants could kick a down opponent, knee to the groin, bite, and even scratch each other with fingernails sharpened just for the purpose. Eye-gouging became the ultimate finish in rough-and-tumble, with men being disfigured for life. Fingernails, sharply filed and coated in wax, dug into an opponent’s eye-socket, attempting to literally rip out the eyeball and hold it aloft before a screaming crowd. How frequently this feat occurred is unknown, since many accounts merely speak of that being the goal rather than an actual result, although an unsubstantiated folktale in North Carolina told of eyeballs littering the ground after a mass rough-and-tumble fight. Eye-gouging may have been the preferred coup de gras, but there were numerous ways to maim an opponent and earn the approbation of the crowd. Biting off ears, lips, fingers, and the nose were popular moves, as was head-butting and, of course, testicle tearing. 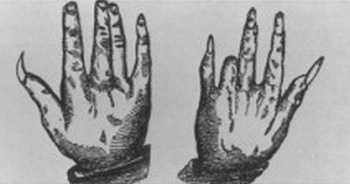 From Elliot Gorn's article from The American Historical Review

American men in the mid-eighteenth century southeast territory apparently took great umbrage at any pejorative thrown in their direction. The journal of one Philip Vickers Fithian, a tutor from New Jersey working for an aristocratic family in Virginia, wrote, in horror, in his journals in 1774 of a forthcoming battle between four young men. Fithian’s journal reveals the tutor’s somewhat prim view of Southern roughnecks, who he believed were far too energetic to take offense at the slightest insult. Fithian may have allowed his Yankee upbringing to color his remembrances of the Deep South, but he provides one of the most detailed accounts of a rough-and-tumble bout. Fithian wrote that, like prize-fighting, two men would meet at a space, surrounded by a cheering (and typically inebriated) crowd, and start off by boxing. However, the fights would quickly deviate from standard pugilistic decorum, for the rules that kept boxing confined to rules of engagement, rough-and-tumble fights were truly anything goes. When one man would go to the ground, the other man could kick, stomp, strike, or gouge. In rough-and-tumble fights, there were no-holds barred as part of the ‘gentlemanly’ agreement. The other thing that was permitted was the use of weapons, although that did not deter many fighters from turning their own bodies into weapons. So prevalent were the long, sharpened fingernails using to attack the eyes that rough-and-tumble was also known in some circles as ‘gouging.’

Travelers to the region reported seeing elderly men with missing eyes or heavily scarred faces from their rough-and-tumble past. In an area of the country already known (and still, to a certain extent) for harsh climate and rough living, rough-and-tumble seems an appropriate moniker for the folks who lived there as well as the fighting in which they engaged.

Participants ranged from hunters, trappers, stevedores, drifters, unskilled laborers, and farmers, but all were part of an un-educated, rural population. Started in the rural Carolinas and Western Virginia, rough-and-tumble expanded in popularity in the late eighteenth century into Kentucky and Tennessee. These sparsely populated areas lacked those two dueling American ideologies, Puritanicalism and Enlightenment, that deemed prizefighting gauche in cities and urban areas. Prizefighting at least had rules and limits, but rough-and-tumble was, undoubtedly, the most violent form of fighting in the U.S. at the time. 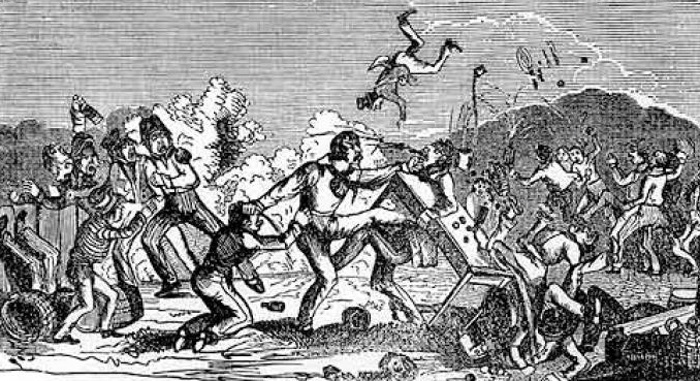 Historians have long deemed the rough-and-tumble fighters as the dregs of American society—an embarrassment to the wider cultural elite. Interestingly, those historians would denigrate boxing and wrestling in one article, then go on to say that at least those sports, which were practiced by some respectable individuals, like future President Lincoln, weren’t rough-and-tumble. To be fair, pugilism was a more gentlemanly pursuit when compared to ripping off a man’s testicles.

Although ‘gougers’ may have traditionally been ‘lower-class’ men, sometimes men from the upper classes engaged in rough-and-tumble, although not always by choice. A physician was a distinguished position in the 18th century in the American South, but that did not preclude a “low fellow who pretends to gentility” to insult the doctor. The doctor challenged the ‘low’ man to a duel, but before the words left his mouth, the man attacked the doctor and with some dexterity, plucked the doctor’s eye from its socket. The man was not finished however, because as the eye bounced against the doctor’s flabbergasted cheek, the man tugged at it, attempting to tear it from the physician’s eye socket, and take it as his prize.

Because the rough-and-tumble fighting was a conceit of rural communities, most of which did not have newspapers that wrote about the fights, accounts of ‘gouging’ typically comes from travelers who visited Virginia and the Carolinas to write about their misadventures. Many of these accounts are clearly exploitative, presenting Americans as backwoods folk heroes, albeit barbaric ones, to British readers, who could read these narratives, aghast but grateful to see their former colonies in ruin. American democracy gave autonomy to those who did not deserve it, like the savages in the deep South, and gouging was merely a sign that independence was not meant for all.

In addition to the lack of newspapers in rural communities, oral narrative, rather than written history, was the primary mode of passing information from person to person, generation to generation. Writing is, after all, not only a relatively modern phenomenon, it is also the mode of communication for the educated. Just as with tribal cultures worldwide, many Americans in the 18th century did not know how to write, which made news and history spread word-of-mouth. There is a prejudice that oral history is conflated by ego and enthusiasm, making tall tales rather than accurate accounts of historical events. But written history is also manipulated, framed by the writer, who may chose to include or exclude information. Therefore, when we hear of the oral accounts of ‘rough-and-tumble,’ they may indeed be exaggerated, but that does not discount them as historical artifact.

Like many other pugilists, ancient and contemporary, rough-and-tumble fighters made self-aggrandizing claims to assert their dominance. Bombastic bragging is an art form, and the backwoods fighters in the 18th century were, like Mohammad Ali, insult poets. Likening themselves to wild animals, and bragging about their abilities to womanize, fight, and drink were part of the rough-and-tumble braggadocio. Celebrated rough-and-tumble fighter Mike Fink excelled in his crowing, exclaiming:

I’m the very infant that refused his milk before its eyes were open and called out for a bottle of old Rye! I love the women and I’m chockful o’fight! I’m half wild horse and half cock-eyed alligator and the rest o’me is crocked snags an’ red-hot snappin’ turtle.

While the rough-and-tumble is typically classified as a Southern tradition, the fighting style passed to the western frontier, most famously legendary American folk hero and Tennessee native, Davy Crockett, who once related a tale of his own ‘gouging’ experience: "I kept my thumb in his eye, and was just going to give it a twist and bring the peeper out, like taking a gooseberry in a spoon." Testosterone-laden groups in other parts of the country participated in similar fights, specifically the lumberjack population in Ohio. Historian Richard Dorson referred to the lifestyle of this cohort as “the lumberjack code,” in which “drinking, treating friends, impulsive pleasure seeking, heroic labor, and vicious fighting” constituted the practices that would, in turn, lead to biting off another man’s nose. 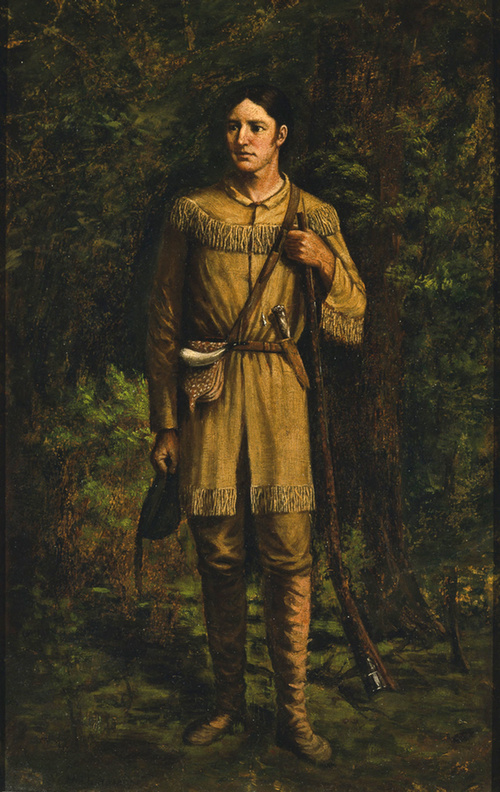 As the eighteenth century came to a close, and a culture of gentility moved through the American South, rough-and-tumble fighting and, perhaps more specifically, the injuries associated with it, became less of a sign of masculinity and more a symbol of old barbarism. In this new gentile society, differences were settled with dueling rather than tearing off another man’s testicles. Men in the middle and upper classes began to train in the art of pugilism, and rules became part of gentlemanly culture. It seems as if the heatedness and the frenzy of rough-and-tumble is what most Southern men truly deplored. A true gentleman should be calm and aloof, always adhering to decorum, even when agreeing to fight another man to the death.

These formal duels did not always succeed, and sometimes, heated tempers led men back to the rough-and-tumble. U.S. Senator James Jackson famously resorted to biting the finger of Robert Watkins, a politician from Savannah, when Watkins attempted to gouge Jackson’s eye.

Unlike prizefighting, which eventually transitioned into the sport of boxing, rough-and-tumble fighting would never become an organized sport, or even one that had recognized champions. It was a form of dueling, in a way. A method of settling a score that viscerally represented the dedication to one’s argument. If a man was willing to lose an eye in order to defend his honor, he was, according not just to the lumberjack code, but to the ancient custom of dueling, a man.

The violence of rough-and-tumble fighting translates to barbarism in our own time, of backwoods brawling indicative of low-brow, uneducated, unsavory degeneratives that we, as a society, are glad to leave in our past. But cache in these rural regions of the American South depended not on the trappings of wealth; the careful grooming and fine clothing of the middle and upper classes were perhaps not seen as effeminate, but were certainly not signifiers of manliness. A culture of machismo dominated the true working class, and scars and deformations due to fighting were evidence of virility and physical prowess. These men were tough, but they had to be—both in a fight and in their daily existence—because everything in their lives was extreme. Faced with dangerous hard labor, exploitation by wealthy men, poverty and hunger, rough-and-tumble fighting was symbolic of their lives. The willingness to fight rough-and-tumble, rather than in a ‘fair fight,’ also revealed, to this particular community, the true grit of a man.