Rousey versus Nunes: A Strange Kind of Mirror 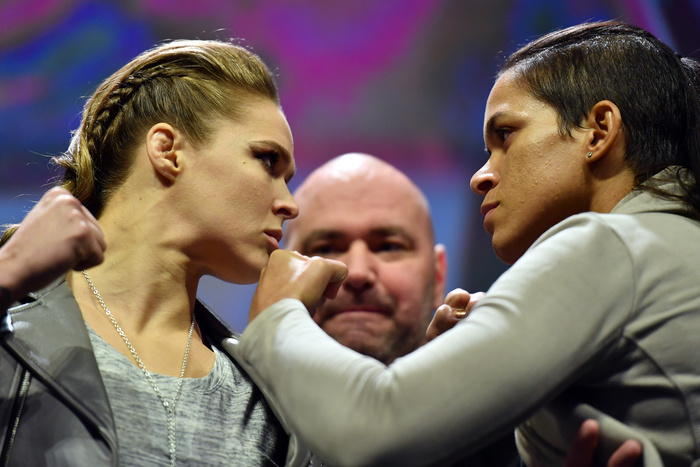 You could be forgiven for not knowing that Ronda Rousey’s opponent at UFC 207 is Amanda Nunes. The storyline throughout the build-up has very much been that this is Ronda Rousey versus her demons. The advertising of this fight has somewhat put the current women’s bantamweight champion in the shadow of the UFC’s returning darling. But then, that is what the UFC women’s bantamweight belt has become—it has been held by three different women in the year since Rousey’s departure from the sport and even the hardcore fan could take a few moments to recall just who holds the strap at the moment.

The return of Rousey has already served its purpose: it has people talking and it has fans emphatically hoping for one outcome or another. From the moment the Rousey-Nunes fight was signed there was a chorus of “the game has passed Rousey by, she’s been exposed” and a counter-cry of “the Holly Holm fight was a one off.” Rousey has done even more to garner the hatred of the MMA fan by refusing to take part in pre-fight media, even skipping the press conference. This was a move which famously saw Conor McGregor removed from the UFC 200 card and is doing nothing to help Rousey’s image of mental fragility.

Ronda Rousey’s motivation has eaten up the headlines. Is she back because she wants to correct the result of the Holly Holm bout? The defining image of mixed martial arts in 2015 was Rousey receiving Holly Holm’s left high kick to the neck, her legs stiff and her arms cut short in the motion of swinging a punch. Is Rousey back because she wants to get one more in the win column before she quits, Holm be damned? Or is Rousey back because she simply has no other means to generate the same kind of revenue and her two movies have been put on indefinite hiatus over concerns regarding her acting ability, or lack thereof?

One idea which has been repeated fairly often since Rousey left is that the division has moved on, and that somehow Ronda Rousey was beating up a weaker crop of talent. One year later apparently everything has changed. That seems hard to believe. In Rousey’s sole loss, she met an opponent who fought a near perfect fight. Holly Holm denied Ronda Rousey the clinch, kept turning her, only committed to stern punches after she had tired Rousey out with a few missed charges, and even when Rousey did get the clinch, Holm held her own. Even in that near perfect performance, Holm ended up in some spots she would rather not have been and ate some punches she perhaps should not have. Holly Holm went on to lose to Miesha Tate and Valentina Shevchenko, allegedly proving that the division has moved on.

It is far more insightful to look at the recent happenings of the women’s bantamweight division in terms of stylistic match ups. Ronda Rousey had her success overwhelming opponents, walking through their punches and achieving the clinch, landing right hands on the way. The ticking clock of the clinch meant that fighters panicked, threw their right hand as hard as they could, and squared their body up in doing so, gifting Rousey the clinch.

Holly Holm looked largely unremarkable in her UFC fights up to Rousey, then found herself in with a foe who would keep moving in face-first, couldn’t deal with opponents angling off the line of attack, and who never, ever changed level to shoot for a takedown, instead attempting to run straight into the clinch.

Rousey’s inability to deal with an opponent angling off didn’t require a boxer as talented as Holm to show, however, the unremarkable Bethe Correira had shown the exact same thing months earlier.

And even by Miesha Tate:

It did, however, take a near perfect performance out of Holm to blow Rousey out of the water inside two rounds.

After Holm won the title, she faced Miesha Tate. Many praised Tate’s improved striking in that bout but her smartest trick was in not doing very much and encouraging Holm to lead and open up her hips. Tate would shoot underneath and after getting the back early and failing to secure the choke, she was able to choke Holm unconscious in the fifth round. Holm then fought Valentina Shevchenko, a counter striker who again encouraged Holm to lead, and Holm ran in pumping punches and eating counters.

When Miesha Tate attempted to defend her belt against Amanda Nunes her porous defence saw her tagged up by meat and potatoes one-twos and overwhelmed by aggression, having her shots stuffed each time she changed level.

And in a sense we have come full circle. Amanda Nunes is all about straight forward aggression. She has decent hitting power but her striking looks laboured and telegraphed next to someone like Valentina Shevchenko. In fact Nunes shares many of Rousey’s own habits: tending to rely on a right hand which is thrown as hard as possible and which throws her off balance, leaving her open to counters and out of position if the opponent moves away.

For Ronda Rousey, the plan should be to do what she always does: walk forward, throw hands, and fall into the clinch after eating the right hand. From there she can look to throw Nunes into a disadvantageous position, avoiding the guard of the Brazilian Jiu Jitsu black belt. If she can land some knees from the clinch or clip off some good right hands along the fence, all the better, but the bum rush to the clinch seems the most reliable means of Rousey offence.

And here is what’s so interesting. It seems as though Amanda Nunes may be the perfect opponent to work this strategy against. She comes out fast and almost immediately throws the right hand or the right kick, both techniques which square the body (and one of which leaves the fighter on one leg) and can be pushed through into the clinch.

Nunes remains on the aggressive as soon as her opponent clinches, almost always attacking with trips. Sometimes these land her in top position where she does great work with elbows.

An exploitable habit of Nunes’ which might not fit in with the Rousey modus operandi is the ending of attacks with long, leaning right hands. And issue for both fighters, this can leave a fighter victim to catch and pitch counters. Catch the right hand on the left forearm, return with the right hand as fast as possible.

Amanda Nunes is the interesting part of this whole match-up. As far as we have seen, Ronda Rousey does not change. Yet we have not seen Nunes use the agile lateral footwork and distance management that brought about Rousey’s downfall. Her answer to wrestlers has been to take them on head-to-head and to attempt to stuff the takedowns rather than elude them. The truth could be that Rousey comes forward, tastes the right hand, and either falls down or gives up. But every Rousey opponent up to this point (spare Holly Holm) has relied on landing the right hand, and whether they landed it or not they ended up in the clinch and taking a beating.

Against Ronda Rousey you want to see religious circling out. One step back, and the next step is immediately lateral—no risking running onto the fence. You want to see check hooks and pivots off line to deal with Rousey’s constant straight line charges. Non-commital jabs are far more valuable against an opponent who desperately wants the clinch than weighted right hands, because the feet are the number one defence to the clinch. When Rousey’s opponent attempts to catch her coming in, you want to see her do it with an elbow, a knee, or even a cheeky ‘nodder’: big lumps of bone which aren’t going to glance off or give as she walks onto them.

Ronda Rousey is looking into a strange kind of mirror with Amanda Nunes. Aggression, heavy right hands, trips from the clinch. Even the negative habits: ending all attacks with the right hand, struggling when opponents break the line, a tendency to fade visibly when drawn into a longer fight. While Nunes’ power and strength make her a dangerous opponent, her standard practice and the frequency with which she falls into the clinch make her also something of a perfect Rousey opponent.

The Tactical Guide to TJ Dillashaw versus John Lineker