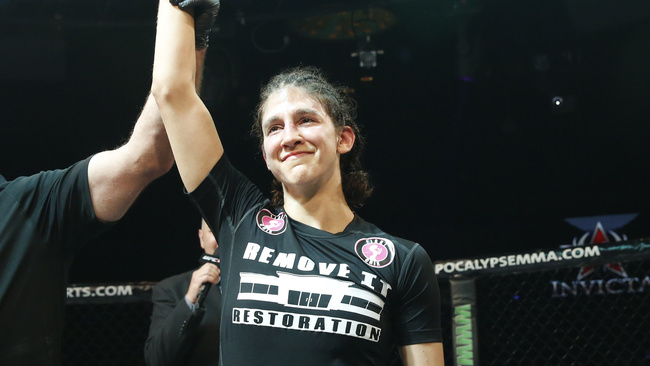 Roxanne “The Happy Warrior” Modafferi, the reigning geek of MMA, the woman who wore a Princess Leia costume to the Invicta 10 weigh-ins and rocked a Return of the Jedi-themed walkout shirt before her last fight, may have outdone herself this time. In the middle of preparing for her bout against Brazilian veteran Vanessa Porto at Invicta 12 tomorrow (airing live on UFC Fight Pass), she took a moment to rework the classic early aughts meme “All Your Base Are Belong To Us” into a celebration of the importance of seizing an opponent’s base in fighting.

It’s a truly inspired piece of grappling nerd humor, and perhaps a playful warning to the WMMA pioneer’s future opponents: All your base are belong to her. And once she takes you down, well, she’s proven herself to be very good on the ground.

Modafferi is currently in the early days of what could well be one hell of a comeback story. After a frustrating streak of losses to Sarah Kaufman, Raquel Pennington and current Invicta FC Flyweight Champion Barb Honchak in the early part of this decade, The Happy Warrior turned things around in her Invicta debut with a unanimous decision victory over Tara LaRosa at Invicta 8. She followed that up by handing the impressive up-and-comer Andrea “KGB” Lee her first loss at Invicta 10.

Now she’s more than ready to finally face Porto again. The two first fought each other back in 2008 when Modafferi defeated her by TKO in the third round and Modafferi has wanted a rematch for quite some time now. The fight was originally scheduled for Invcita 10, but Porto’s Visa issues forced Lee to step in at the last minute. Now that all the red tape has been cleared, Modafferi is more ready than ever. She’s in prime mental and physical shape thanks to her team at Syndicate Mixed Martial Arts in Las Vegas and she’s ready to extend her record against Porto to a nice 2-0. And then maybe she’ll have some choice words for the champ.

We talked to Modafferi about base, weigh-in costumes, Dragon Ball Z, and her plans for Barb Honchak.

Fightland: I want to say that I really enjoyed your “All Your Base” video. I hadn’t thought of that meme in years.
Excellent. Thanks for saying that.

What inspired you to make it, and why now?
I just happened to dig up an old CD in a box when I was moving. It was like “Roxy’s Mix 1” from college and I stuck in my car and it had that song on there and I’m like “Oh my god!” So then I had to watch the video and, that same day, our coach was teaching us wall takedowns and he was talking about how you have to take away your opponent’s base and it just... I thought “Base. Base.” I sent it to my friends and it became a thing. Every time the coach said “base,” I’d poked my friends like “Your opponent’s base!” And then I had to make it.

On a similarly geeky note, you mentioned on Twitter that your weigh-in outfit might be a little more obscure this time. Are you worried that you’re going have to explain it to people?
Yes, because it’s going to be an anime thing. So the people who have seen that anime are going to love me and the people who don’t are going to think I’m a weirdo, but I don’t care about that. I’m totally ok about that.

Then it’s extra exciting when someone does recognize you, isn’t it? That’s how you separate the cool people from the not cool people.
Exactly! I like that. I’m going to remember that.

In the meantime, Return of the Roxy is still an incredibly appropriate shirt because you have been on fire since joining Invicta. Do you feel revitalized? Do you think this is a comeback period in your career?
Exactly. I do believe that, yes. 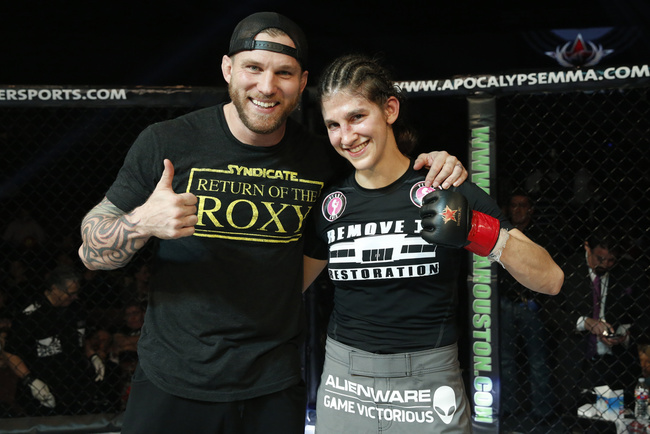 It’s been almost exactly seven years since you first fought Vanessa Porto, and it’s been months since you were originally supposed to face her at Invicta 10. So how ready are you for this fight?
I’m very, very ready. I’ve been preparing for her since last year when I thought I was going to fight her. And I actually thought that I was going to fight at the end of March. So I’ve been doing lots of cardio. I’m in really good shape for this. I just want to get it over with and show her what I’ve got.

How much have both of you changed over the past seven years?
I think we’ve both changed a lot. I, for one, have developed in whole new ways. And I’ve seen her fight, and I think she’s improved and changed. I don’t even remember the last fight very well, but I’m sure this one isn’t going to be anything like that one except the result.

In a recent interview, you said that part of your strategy these days is to go “Super Saiyan.”  Would you care to explain that to the uninitiated?
Yes. Super Saiyan is when the character in Dragon Ball Z summons all of his energy and explodes into a more powerful fighter and his hair turns yellow and he just becomes double strong. I don’t think I can make my hair turn yellow, but it would be cool to have that... like when you’re down, that super burst of energy that lets you eliminate all of your fatigue and do something amazing. That’s what I want.

Ronda Rousey wore a Dragon Ball Z t-shirt at Wrestlemania. Is there some sort of special connection between Dragon Ball Z and MMA?
I was so excited to see that t-shirt! Especially when it said “Over 9000,” because that’s a key phrase in Dragon Ball Z. I swear, Akira Toriyama, who’s the author of Dragon Ball Z, he must have done martial arts or something, because some of the stuff he writes in his comics, I feel like he really gets it. He really gets how martial artists – and fighters especially – think and feel. The concept of being beaten down and you’re injured but you still have to win anyway, no matter what. You have to get up and win anyway. And that phrase, “win anyway,” really embodies us. We might be hurt but, we have to get in there and win anyway. So that’s just really cool and inspiring to all of us.

You’ve changed so much since that Honchak fight. You must have certain plans in store for Honchak after all of this time.
Yes. I want to choke her! Because she choked me, and that’s my favorite move. You’re not supposed to lose to your favorite move...

You know what I’m gonna say? “All your belt are belong to us.”

Amazing! I love it.
That’s going to be my post fight speech after I beat Vanessa.

And then that can be your next T-shirt, right?
Oh man! That’s awesome.