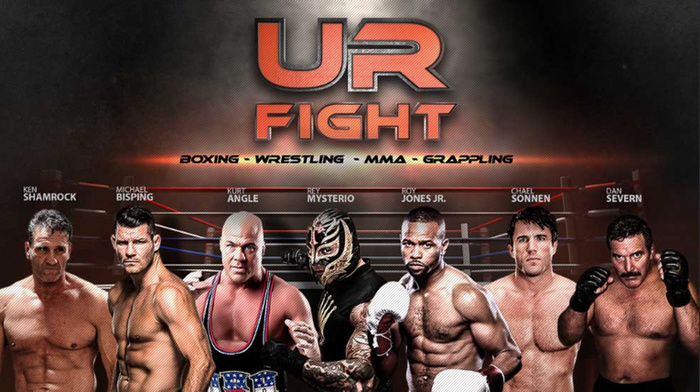 In perhaps one of the most bizarre Pay-Per-View cards ever proposed, one fan will be given a shot to win $100,000 if they can knock out pound-for-pound boxing legend Roy Jones Jr. on live television. The new digital network, Urshow.tv, is calling for fans to submit a 90-second video explaining why they should be chosen to face Jones in the ring on March 20th. The event, UR Fight, will also be featuring some of the top names in fighting sports history, showcasing a total of four different competitive combat mediums.

First on the docket is a rematch between UFC middleweight contender Michael Bisping and notorious loudmouth Chael Sonnen. As fans might remember, Sonnen won their first encounter back in 2012, but with the proposed matchup being marketed as a “grappling-only” match, past performances may have little affect on the outcome given the modified rules.

Following that is the rubber-match between MMA legends Dan Severn and Ken Shamrock, who split their first two fights back in the mid-90s. Severn, who retired three years ago, will be entering the cage at 57 years of age compared to Shamrock’s 49. According to the event’s website, this match is to be regulated under traditional MMA rules.

With Shamrock also slated to fight on Bellator 149 this upcoming Friday, and Bisping to fight Anderson Silva a week later on UFC Fight Night 84, the proposed matchups don’t appear to hold much relevancy, especially since they’ve been set before the outcomes of the aforementioned bouts have yet to be determined. At the very least, it doesn’t help justify that these matches to be any sort of legitimate.

The third bout, however, is definitely not legitimate; at least in the regard that the outcome will be predetermined as Rey Mysterio Jr. will be taking on Kurt Angle under WWE rules. Why a professional wrestling match is being thrown into the middle of the event is anyone’s best guess.

Finally, in perhaps the strangest of what is already mounting up to be a really strange night, Roy Jones Jr. will be taking on whichever fan wins the most online votes of the submitted videos. Jones, who was stopped brutally by Enzo Maccarinelli in 4 rounds of his last outing, has been recently seen in the news for an alleged retirement announcement, which he later went on record to state as untrue.

While the card feels more like an answer to the question, “What is the most ridiculous PPV event imaginable?”, there does appear to be sufficient evidence that it is in fact happening. There is a somewhat legitimate-looking site promoting the card, Kurt Angle confirmed it on twitter and Jones can be seen on video issuing the KO challenge. Unless something goes wrong in the next month (and trust me, there are plenty of things that could go wrong), fans will be in a store for a sideshow.

It’s kind of sad that Jones is taking part in an event of this caliber, especially since it’s kind of a no-win situation for him. He either beats up an untrained and unqualified opponent, looks horrible in doing it, or the impossible of the impossible happens and Jones gets knocked out by some random person on the Internet.