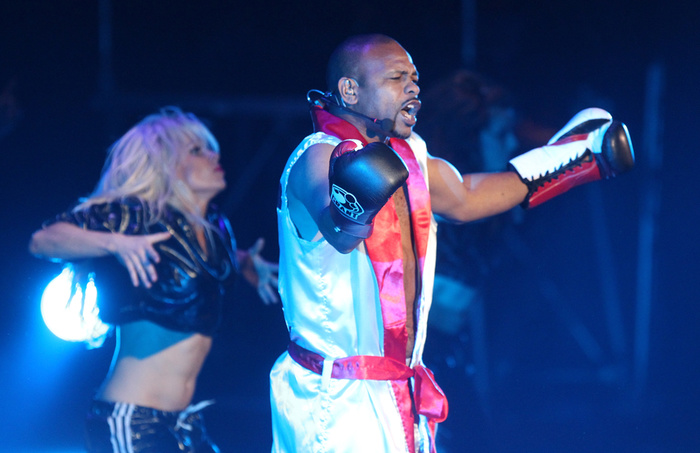 The mystery opponent to face boxing legend Roy Jones Jr. later this month has finally been revealed. Vyron Phillips, a 5-3 MMA fighter originally from Minnesota fighting via Western Canada, received the most votes to secure the chance at winning $100k to beat Jones.

Though UR Fight has officially announced the bout, there is still no confirmation on whether or not the Arizona State Athletic Commission will qualify Phillips’s background in MMA as “professional boxing experience”. Originally, the network promoted the bout as Jones facing off against a “random fan” until the state commission stepped in to say that said fan had to show some evidence of professional boxing experience in order to meet safety guidelines. According to the site Tapology, Phillips is ranked 44th of Canadian MMA welterweights, but shows no official record in professional boxing.

Though the promo video on the site shows plenty of slow-motion clips of Phillips doing ground-n-pounds and flying knees, the match is officially sanctioned under traditional boxing rules. While most of us know better, the fight will inevitably reignite the debate of Boxing vs. MMA, even though that debate is pointless to begin with. It is perhaps even more pointless in this circumstance since another unconfirmed factor is the weight at which the fight will take place. With the fight only 11 days out, it is unlikely Jones would be forced to cut any significant weight and given that Jones has fought his last seven bouts at 190-lbs and above, it makes Phillips spent career at the MMA welterweight limit of 170-lbs a severe disadvantage. Add in the fact that Phillips has zero professional boxing experience compared to Jones’s 71-fight ledger, and the chances for an upset are slim to none. Perhaps the only factor working in Phillips’s favor is his age, where he will be 14 years Jones’s junior on March 20th.

Another surprise twist to the evening is that due to his recent loss against Royce Gracie at Bellator 143, Ken Shamrock will now be replaced by the 50-year-old Tank Abbott. It’s been close to three years since Abbott last appeared in the cage, but he more recently appeared in MMA media for his radio comments on Ronda Rousey and women’s MMA. The combined ages of the two combatants now rises to 107 years.

The spectacle is set for March 20th at the Celebrity Theatre in Phoenix, AZ, and will also feature Michael Bisping and Chael Sonnen in a grappling match, as well as Rey Mysterio vs. Kurt Angle under WWE rules. All of this can be seen for $11.99 plus tax on the URshow.tv network.