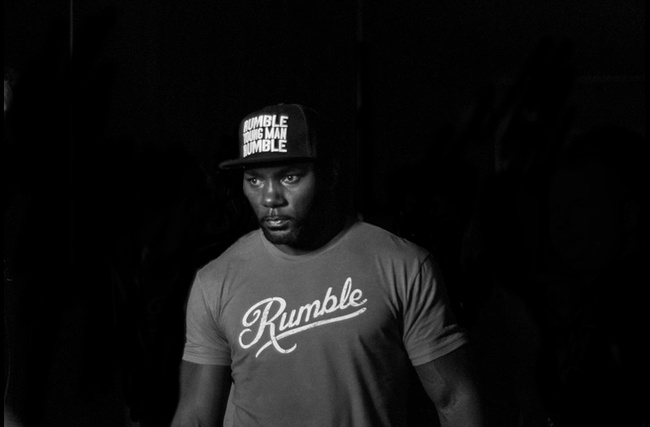 The "huh" came courtesy of Anthony "Rumble" Johnson who shocked the MMA world and flattened the wily Alexander Gustafsson in less than a round in their main event tilt. What's more impressive is that Johnson did it on Gustafsson's home soil with a crowd who were less than welcoming.

The "meh" was all down to the atrocious main card outside of this main event. There's plenty of time to rant about matchmaking and rave about technique, so let's look at the fights.

Alexander Gustafsson was just a couple of points shy of becoming the UFC light heavyweight champion and the first man to truly defeat Jon Jones just a couple of years back. Then wasted 2014 in a single irrelevant match against Jimi Manuwa (which was originally planned to be the usual transparent tune-up against Lil Nog) and now, in January 2015, a crushing defeat has put the brakes on any notion of a rematch with Jones.

Anthony Johnson, meanwhile, stole the show. I've received many queries on what I made of Rumble technically, and while I wasn't blown away by his repeated winging and missing right hands and throwing himself off balance as a result, you can't fault someone if they're not getting punished for it.

What we do know about Johnson, and have known since his welterweight days, is that he loves the stepping left high kick, and pushing off people's faces. Rumble is fairly predictable with his left high kick, you know he'll try it almost immediately just like Vitor Belfort has in every fight since the early 2000s. But against Gustafsson, who relies on lateral movement and who has shown to have a serious flaw in defending this technique, it was a great idea to go to.

A good high round kick, particularly against someone who is never going to wrestle you, does a wonderful job of standing them still as you close in behind it with punches. Rumble isn't a quality boxer, but he is very good at getting a hold of people, pushing them around, and hitting them while he does it. And there's nothing to say that this is worse than boxing in combination with head movement, footwork and all the fancy stuff. Results are results.

Badr Hari, one of the sharpest kickboxers in the game, scored most of his knockouts as he cross faced or stiff armed out of the clinch. As did George Foreman. Even Floyd Mayweather, considered a sublime technical boxer, lands his best blows off of the wrestling element of his bouts.

With one hand on Gustafsson to prevent a tie up, Johnson smacked away with the other and sent Gusty to the floor. Johnson followed, controlled for a period, and then finished with powerful blows to the head.

Now Gustafsson finds himself in an unfortunate position. He is proven to be a stylistically hard match up for Jon Jones, but with Johnson and Cormier in the way, he might struggle to make it to the top of the heap again.

Johnson seems as though his straight forward style with little lateral movement might play more into Jones' game than Gustafsson's ever did, but we know nothing about a match up until it actually happens. It's certainly nice to have another new challenger for the crown.

In the co-main event, Gegard Mousasi showed up the stunted striking game of the veteran Dan Henderson. After a sharp counter jab as Hendo attempted his stumpy inside low kick, Mousasi timed his right straight to beat Henderson's looping right hand. It was an easy win for Mousasi, but there was a little controversy over the stoppage.

Henderson—a legend of the sport who is now 1-5 in his last 6—is an example of the problems which the UFC has with its older fighters who still have name value. To justify the pay of fighters who have, through a successful career, negotiated a decent contract, the UFC has to headline or co-headline with them, regardless of how far they are from their competitive prime. Desperate not to lose name talent to Bellator, we end up with Dan Henderson co-headlining cards and Mauricio Rua headlining cards on a 1-3 slide. It's a strange situation and not always good for cards.

Elsewhere on the main card, an optimist obviously put together the match between Phil Davis and Ryan Bader, believing that both would show off in a battle of high level MMA wrestling. Unfortunately, as often happens when you match up two strong wrestlers, the fight played out as a mediocre kickboxing match. Both men threw one punch or kick at a time, and Bader picked up the split decision.

The card was not without saving moments, however. Sam Sicilia's starching of Akira Corassani was simply scintillating, and Makwan Amirkhani's flying knee, push to the fence, and perfectly placed counter uppercut had Andy Ogle out of the fight in just seconds.

Certainly not a card to write home about, but when Rashad Evans—who hasn't fought in over a year—is considered #4 in the world at light heavyweight, any movement in the division can be considered an exciting development.