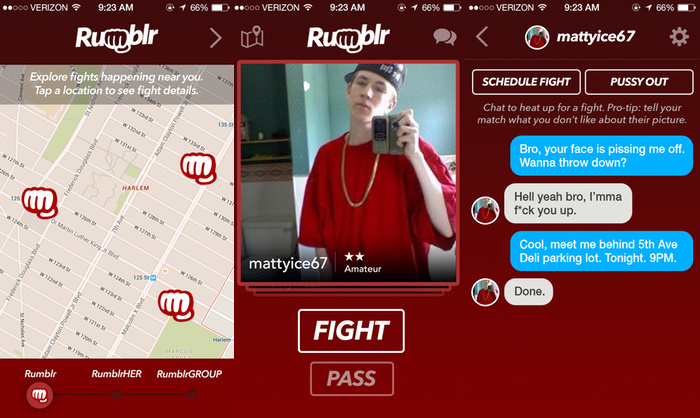 It’s the app that launched a thousand jokes about breaking the first rule of Fight Club.

Last Friday, November 6, tech blog Venture Beat posted a story about a new app that’s currently in development called Rumblr. Basically a Tinder-style service for aggro assholes who are looking for street fighting partners, “Rumblr is an app for recreational fighters to find, meet, and fight other brawl enthusiasts nearby,” according to their official site.

Promising “Casualty-free casual fighting for free” (which is their actual slogan, no matter how silly and impossible to guarantee that is), Rumblr will allow anyone looking for a fight to match up with similarly-minded individuals “who want to throw down,” arrange and schedule fights (or “Pussy Out,” Rumblr’s charming answer to swiping left), and even prepare for your opponents by checking out the detailed tale of the tape-style statistics in their profile. Because god forbid you go into an unsanctioned public melee ill-prepared. Fight options appear to be separated into three sections: Rumblr, RumblrHER, and RumblrGROUP, for the poly-aggro-ish amongst us.

If you just like to watch or you really, really miss the salad days of Bum Fighting or that time Logan paid indigent people to fight on Veronica Mars, though, Rumblr has you covered as well. “You don’t need to fight to use Rumblr. With Rumblr Explore, anyone can browse and attend fights close by that other Rumblr users have arranged – all for free!” 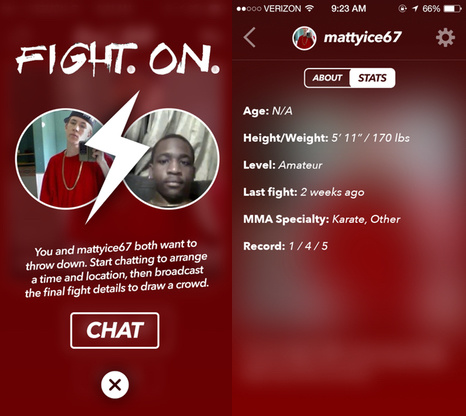 Rumblings about Rumblr quickly spread over the internet, attracting attention from outlets as wide-ranging as Complex, Dangerous Minds, The Bleacher Report, The New York Daily News, and The Daily Mail (which you could call the Rumblr of newspapers in the sense that it is ill-conceived, unnecessarily antagonistic, lowest common-denominator-appealing, and of questionably veracity).

The attention attracted a number of casual warrior hopefuls, who signed up for the chance to be given access to a beta version of the app on the Rumblr site. “More than 78,000 people have signed up for beta access, an email sent out to the lucky early-bird brawlers showed,” The New York Daily News reported yesterday. “The email also claimed to be giving away ten pairs of golden brass knuckles to ten people who tweet about the app.”

The team behind Rumblr also told the paper that they were working with the iOS store “to hash out legal issues preventing Rumblr’s approval.” They still plan to launch the beta today, November 9, at 5pm EST, though.

Whether this launch will actually be able to happen due to legal issues remains to be seen. Whether or not this is real, a Peeple-style clusterfuck, or an flat out hoax also remains to be seen. Business Insider remains dubious in their coverage, pointing out the general absurdity of the idea, the potential legal ramifications, and some of the inconsistencies in what we’ve seen from the developers so far. For example, the official site features a number of (perversely amusing) photos that claim to be from their Instagram profile, but no actual Rumblr account seems to exist. They did, however, manage to set up an official Twitter account.

We’ll find out one way or another at 5pm EST tonight. In the meantime, you can always hit up Reddit for some fascinating speculation on the subject as the world gets ready to (maybe) Rumblr.

[UPDATE: It was all just a hoax! Read about what turned out to be a creative marketing gimmick here.]

Someone Built a Computer Made of Punching Bags