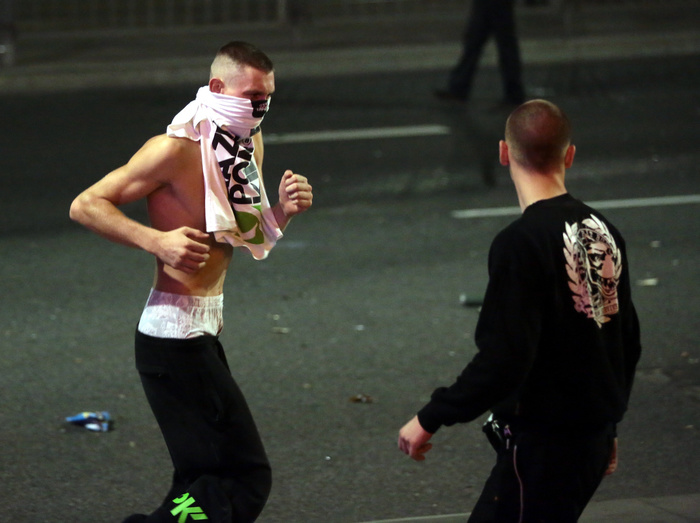 Among the Thugs by Bill Buford is an underrated book, especially if you have a hard time articulating your own attraction to unrestrained violence. Published in 1990, it’s an odyssey through the ultra-violent, nationalist, fallen-down-drunk world of English soccer hooligans at their 1980s worst, and a subjective look at the allure of crowd violence through the author’s proximity to grown, not-so-disenfranchised men who spend their free time groupie-ing their way around Europe for the express purpose of fighting people who like different soccer teams. It’s been a minute since I read Among the Thugs, but I remember fat drunk dudes marching through the streets of foreign cities and starting drunken brawls with whomever, apolitical politics that sometimes lapse into outright racism, the funniest first-person account of getting beaten down by cops I’ve ever read, and an author staring into the void of crowd violence and writing down what he sees.

Soccer hooliganism is fighting for an irreducible reason: supporters of one team fight another because they are supporting different teams. There are no geopolitical gains or losses, no reasons of honor or nobility, none of the performance or compensation of prizefighting—it’s fighting for its own sake. And while the English were once the standard-bearers for ugliness in the beautiful game, the Russians, apparently, have taken their mantle.

This weekend, The New York Times published a piece about Russia’s soccer hooligans, who made a name after traveling to the 2016 European Championship in Marseille, strapping on GoPros and smashing their pint-swilling, British-club-supporting counterparts. Instead of showing up trashed and throwing haymakers between dry heaves, modern Russian hooligans deliberately train in boxing, wrestling, Muay Thai, and mixed martial arts, and eschew intoxication.

What a miserable, pathological subculture—some Brown Shirts in Berlin in 1933 type shit. Still, according to the Times, there’s an honor code: fighting bareknuckle is more manly, no weapons are allowed, no stomping heads, no attacking bystanders, and you stop when the guy says "stop." And with a police crackdown ahead of Russia's hosting the 2017 FIFA Confederations Cup and the 2018 World Cup, football firms have to make appointments with rival clubs, and head out into forests wearing MMA gloves to beat the piss out of each other in fights that can involve dozens of people.

MMA and its components becoming parts of petty wars on the terraces sounds singularly gross until you consider that trained fighters bringing technique to spontaneous brawls isn't new. BJJ black belts police the surfing lineups on Oahu’s North Shore and beat down unfamiliar faces. Two years ago, a rugby player slapped a heel hook on his opponent in the middle of a match. The dynamic sometimes cuts the other way too: Polish soccer hooligan Artur Szpilka became a 20-2 boxer and fought Deontay Wilder for the WBC heavyweight title last year. Some have tried to channel these impulses: a Russian politician suggested that the hooliganism sideshow should be made into a sport, and in February M-1 Global organized an MMA fight between fighters from rival soccer clubs.

Still, the intentionality of it all is unseemly. Fights at and around soccer matches are dumb, but they’re almost understandable if you’re drunk and bored watching a game coast to a 0-0 final score, and they’re not so harmful if you hit someone without really knowing what you’re doing. If you’re sober and you spend your free time rolling around on mats and hitting pads so you can beat up other soccer hooligans and the spontaneity disappears completely, the fights become something different. The antisocial becomes the psychopathic, and the self-imposed prohibition on stomping heads is subject to change.

But we’re in morally grey territory already. There’s nothing new here—the origins of soccer hooliganism trace back to the 1300s. No one worries about hooligans being good role models or cultivating a sponsor-friendly public image—the important thing is to keep bystanders out of harm’s way. And if you want to fight alongside a group of friends in the name of your favorite soccer team so badly that you’ll go out into the woods to do it and others are waiting for you there, it makes sense to put in hours at the gym, go into the woods, beat each other up, and don’t bother anybody.