Sam Sheridan on the Fighter/Writer's Life 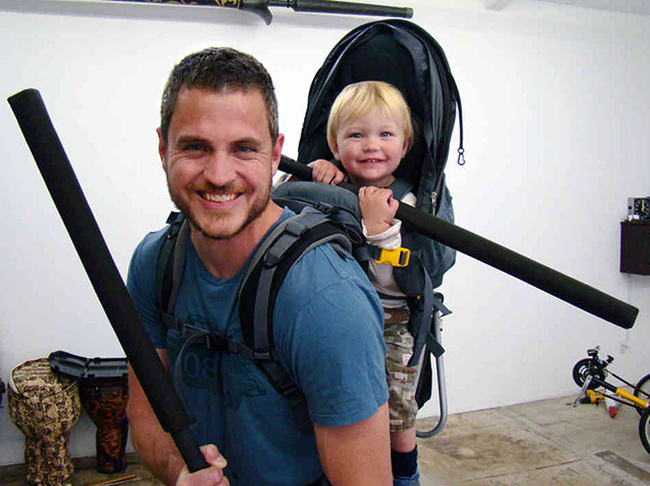 Once upon a time, Sam Sheridan sailed halfway around the world, wrapped his hands, took his lumps, and had his hand raised after a pro Muay Thai fight. He shared that story of training and competing in Thailand in Men's Journal and became an accidental writer. In his first book, A Fighter's Heart, he turned far-flung experiences with Miletich Fighting Systems and Brazilian Top Team into experiential prose. In The Fighter's Mind, he climbed into the brains of Dan Gable, Renzo Gracie, Greg Jackson, and other luminaries for insights into navigating the fight game. Today, he's an author of a third nonfiction book, this one about surviving the apocalypse. Sheridan spoke with Fightland about the value of first-person narrative, cutting his teeth as a fight writer, and why unarmed combat translates to high drama.

Sam Sheridan: Writing is about getting at a universal truth, and successful writing can tap into an emotion, or a truism, or a philosophical point, or something that we all feel or understand to be true. And fighting, it’s just a great way to play in that space. It has drama. It has excitement. It has tension. It has courage. I think, in the modern era, seeing real courage is incredibly valuable. The reason fighting is great is because you can schedule and manufacture a life-and-death situation. You create a dangerous situation where genuine courage has to be on display. And that’s hard to find. That's why we watch sports. That's why we watch drama on TV. It’s what stories sort of aspire to--those demonstrations and examples of human courage. I think the basest instinct within us is drawn toward human examples of courage, seeing bravery and being attracted to guys that we would want in our cave, guys that we would want on our team hunting the mammoths. It’s a quality, sometimes called “gameness” that I write a lot about in my first book.

I had never thought I was going to be a nonfiction writer—that was never a plan. But I had had a fight in Thailand and lived in Thailand, and afterward, I met an agent from New York out here [in Los Angeles]. He said, “That’s a good story. You should give that a crack and we can sell that to a men’s magazine.” After I sold the first story, I was working as a wildland firefighter and the magazine people asked for more fighting stories. “Is there a book in there?” they asked me. I absolutely knew there was a book in there.

Painters will often copy paintings as part of the learning process, and I actually do that with prose. I started doing it just because I wanted to keep notes on a book—I’d read through a book and I’d dog-ear the bottom of the page whenever there was a good riff or thought or line, and then I’d go back through afterwards and copy the paragraph verbatim. You end up getting a taste of the author’s style, and it sort of goes into your subconscious understanding of good writing. It’s boring and it’s tough because you end up spending hours on a book after you’ve read it, just writing out passages. But then you have the notes on your computer in your files, and you’ve kind of educated yourself stylistically into what this writer’s doing, their word choices, their internal rhythms.

I was writing narrative nonfiction … so I was reading fight stuff. I was reading all the great boxing writers--Norman Mailer, Plimpton, Dave Remnick, Carlo Rotella--and copying out of their books, and at the same time educating myself about how they think about boxing and fighting. They’re all much smarter than I am, but I felt like I could still do something they hadn’t done, particularly because MMA hadn’t been taken that seriously by anybody.

There’s definitely value in experiencing what you’re writing about—that’s what my whole life has been about. Get your hands dirty. I would have a harder time writing about it if I hadn’t even done it a little bit. I take pains not to set myself up as an expert or a guru because there are other guys who are doing that. At the same time, I think there’s value in people that are writing about fighting and bringing a different set of skills than a professional fighter has into analyzing and talking about the fight game.

The realization that you need to be a character in your own book is unpleasant. I’m not an introvert, but I don't believe in the confessional nature of everything--telling everybody about all the things that ever happened to you on Facebook and tweeting emotions, you know? The number one rule for writing in journals is: Don’t write about your emotions because no one gives a shit. You’ve got to write about what the day was like, what the smell was like in the market in Thailand or whatever, something you can use for your later work. But don’t write about how you feel because no one cares. When you go back to re-read it, you won’t care. But if you can really capture the sights and sounds and smells of an experience, you can use that in your writing.

There are limits to nonfiction, and I really think in the end fiction can be more truthful than nonfiction. There are always a lot of things I can’t write about and a lot of names I can’t name—who’s on steroids, who’s cheating on their wife, what’s really happening in the dark corners of their mind, who’s cracking up and who’s a fuckin’ asshole. I won’t throw people under the bus because I’m not writing those kinds of books. But if I was going to fictionalize it, I could something that would be more essentially truthful.

Fighting gives meaning. Fighting is a way for things to become significant because you can get hurt, because there’s real damage involved.  I think people get addicted to it, which is what I see in a lot of cornermen and trainers: They love taking new fighters to the big fight—even though they aren’t fighting—because of the meaning involved. There’s a moment of, like, “This is very important. This is very significant.” And it’s a very addictive feeling. We’d all love to feel like what we’re devoting our lives to is something important.

Peace Through Fighting (and Tattoos)