Sambo's Gulag Past and MMA Future 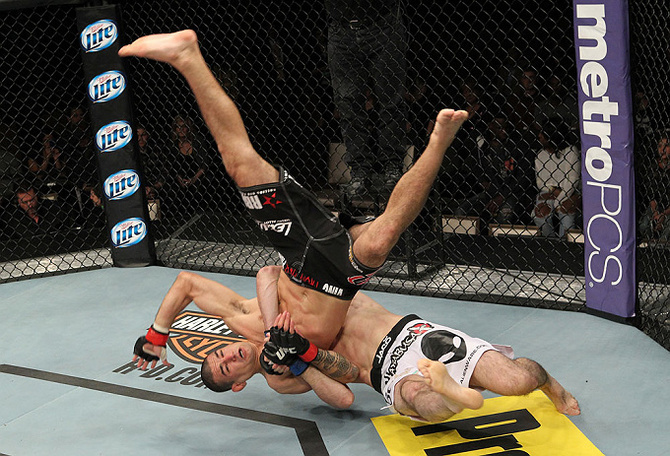 On September 29, 1937, Vasili Oschepkov, a Russian martial arts expert who’d studied wrestling in Mongolia, wushu in China, and other fighting disciplines in an attempt to develop the most efficient way to disarm a man, was “unmasked as a Japanese spy,” according to an official decree of Stalin’s secret police. Two days later, he was arrested in his Moscow home, and 10 days after that he was shot in the head in a Siberian Gulag. That Oschepkov wasn’t a spy didn’t matter in Stalin’s USSR, of course. Fraternizing with “the Japanese Imperialists” -- even if only to learn judo and jiu-jitsu -- cost him his life. And it almost cost Russia its official combat sport.

Starting in 1920, just three years after the Russian Revolution, Oscehpkov and Viktor Spiridonov, another martial arts expert, developed for the Red Army a set of techniques and maneuvers to disarm an advancing enemy using only one’s hands, incorporating the throwing elements of judo, the striking principles of karate, and the grappling wisdom of folk wrestling from the Tatars, the Uzbeks, and other east-of-the-Urals people. They called it Sambo, a loose acronym for the Russian phrase САМооборона Без Оружия, which translates to “self-defense without weapons.”

Oschepkov’s death might have ended the 17-year-old program that trained elite Red Army fighters had it not been for one of his protégés, Anatoly Kharlampiev, a rangy Muscovite who had also trained in fencing and boxing, and who re-oriented Sambo into a nation-building sport. Kharlampiev, who had a gift for maneuvering in politburo circles that his predecessors clearly lacked, presented competitive Sambo to the USSR All-Union Sports Committee in 1938, and under his leadership it became an official combat sport designed to unite the far-flung, poly-cultural nation by subsuming traditional martial types into a central organization, much like the Soviet Union was doing across the cultural landscape.

Oschepkov, Spirodonov, and other Sambo masters developed a vast catalogue of techniques that were dissected to their constituent movements and analyzed for their efficacy. In this way, the discipline embodied a broader social and philosophical phenomenon that was taking hold all over the world during that era: thinking of the body as a machine.

Forty years before, in the 1880s, the study of worker movements by the American Fredrick Winslow Taylor helped produce what was known as the Efficiency Movement, which industrialists like Andrew Carnegie applied to factories and management infrastructure. The fundamental idea of efficiency was to evolve small-scale craft production into mass production, essentially turning human beings into efficient creators of capital, which is exactly what Marx and his communist adherents decried about exploitation of workers by wealthy industrialists. That the same drive to turn people into efficient capitalist workers in the west motivated the world’s greatest communist power to develop a combat fighting style for its soldiers based upon the kinematics and physiology of the human body is one of the great small ironies of history.

By the 1920s the principles of Efficiency Movement had spread into the larger cultural world. In 1928, the Austrian dance theorist Rudolf von Laban published Kinetographie Laban, a book that broke down movements into a matrix of qualities and moods. Oschepkov and Laban shared a kindred worldview. Of course, how and why those movements were deployed were entirely different in dance and in fighting.

With Sambo, an intricate and wildly imaginative lexicon of attack emerged, featuring torquing torso throws, unorthodox holds and strike-throw combinations, and even punching styles unique to the discipline. The casting punch, since made famous by Sambo's greatest MMA champion, Fedor Emelianenko, gave a fighter the chance to land swooping blows from long range or quickly turn a punch into a throw or hold if an opponent ducked into closer range. The flying armbar and scissor takedown, meanwhile, used dynamic attacks to engage an opponent and then bring him into a submission hold. All of these techniques were based on the principles of efficiency, but unlike the soulless mechanization of the industrial worker, lampooned so famously in Charlie Chaplin’s Modern Times, Sambo’s movements were designed to empower the individual. Early debates about Sambo in the USSR revolved around whether the martial art should be taught to the wider population of Soviets, not just members of the special forces or competitive athletes, and early propaganda films show Soviet men and women joyously flipping oncoming aggressors.

As the UFC prepares to move into Russia this year, and fighting styles from around the world become more prevalent in MMA, Sambo may be poised for something of a renaissance. At UFC on FX 7 in Brazil, undefeated lightweight Khabib Nurmagomedov re-introduced Sambo to the world fighting stage with a provocation. Before taking on Brazilian Thiago Tavares, a jiu-jitsu black belt, in Sao Paolo, Nurmagomedov threw on a T-shirt that read, “If Sambo were easy, it would be called jiu-jitsu.” That jiu-jitsu is MMA’s dominant discipline is unquestioned, but here was an MMA fighter questioning it. And he has a point: In a constantly evolving sport where a wide range of ground tactics has become necessary, fighters like Nurmagomedov, Rustam Khabilov, and others are sure to extend the pioneering work of Vasili Oschepkov, that martyred father of the sport, into more situations where an efficient and wildly imaginative method of disarming an opponent will come in handy.

Fedor Emelianenko Taught Me How to Love