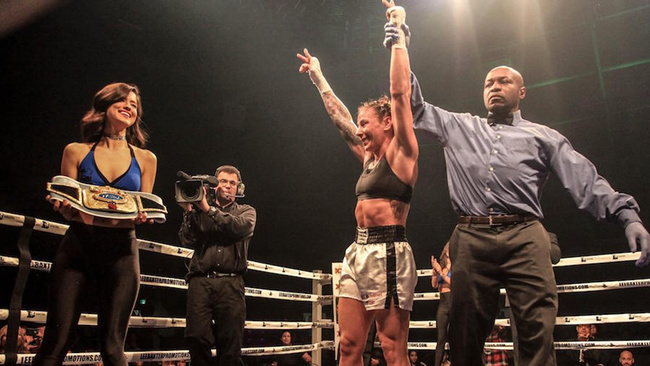 Ten minutes before stepping on the scale for the weigh-in, Sandy Tsagouris and her daughter Celina are hand-in-hand, dancing to "Treat You Better" by Shawn Mendes.

Tsagouris is a day away from an opportunity to become the very first Toronto-born boxer to ever win a world title in the Greater Toronto Region, but right now, she's still just Mom, and dancing with your child to the sounds of the pop stars du jour is part of parental duties.

Despite the gravity of her fight against Carla Torres, and its historical significance, Tsagouris' purse isn't big enough to allow her to take a break from family life, or her day job as a personal trainer, as she prepares for the biggest fight of her career. If she's lucky, her purse for a fight might be the equivalent of what a relative male novice fighter would earn on a weekday televised fight card. On the back end, she gets a cut of personal ticket sales. On the recent Keith Thurman-Danny Garcia megafight in Brooklyn, female star Heather Hardy illustrated the futility of that particular perk, when she sold over $37,000 in tickets, yet the doors to the venue didn't open until her fight had already started.

As a result, Tsagouris, and most female fighters don't get to enjoy the luxuries that their male world-class counterparts would during training camp—such as moving camp out of town and leaving family life behind to focus on their profession.

Boxing fans' lens into what training camp is like is mostly through HBO's 24/7 or Showtime's All Access programs, which focus on megastars' journeys ahead of forthcoming contests. Inevitably, there is always a scene in which a fighter retires to the bedroom in his rented mansion somewhere in California and Skype's his children back home to let them know Daddy is OK and will see them soon. It's an emotional scene, meant to illustrate the solitude and loneliness a high-level combat athlete has to endure to provide for said family. For Tsagouris, though, her struggles involve trying to lose eight pounds overnight, while still having to stare at the cookies she packs in her daughter's lunch on Thursday morning.

"Luckily for me, my schedule at work and her going to school lines up perfectly. Xtreme Couture gives me the chance to make my own schedule, so after dropping her off at school, it's basically back to work," Tsagouris told VICE Sports. "My daughter is really good. I think she likes it more than I do. I don't think she wants to fight—she wants to be a promoter."

Four-year-old Celina does appear more comfortable than her 36-year-old mother in a promotional atmosphere at times. She cheers and shadowboxes in the foyer of the Powerade Centre, while Sandy climbs on the scale in a cable-knit sweater and grins in shy appreciation of all the photographers snapping photos of her.

When she meets her opponent, Torres, for the first time, they pose with the vacant WIBA super featherweight title, and then exchange cordial smiles.

"I feel like [female fighters] have a harder chance of being in the spotlight, so I appreciate everybody. I don't hate the person, I never hate anybody to be honest with you. We're here to make money and put on a show for our fans. People who are my fans will probably end up being her fans, too," said Tsagouris.

On fight night, it's apparent that Tsagouris has indeed sold her share of tickets—either through personal sales, or indirectly as one of the reasons a fan is in their seat, as chants of "Sandy!" begin to pour in when it's apparent her bout is up next.

Several tables ringside are populated by her partner and his friends, members and supporters of the Hells Angels Motorcycle Club—proof again that her surroundings are often far more provocative than she is.

The crowd in Brampton, Ontario, is shown a vignette outlining the significance of the bout on the arena videoboard, reminding them that the last time a Toronto-based fighter even contested for a world title in the region was in 1973, when Clyde Gray faced welterweight champion Jose Napoles.

A women's world title fight had never even been staged in Toronto—with only a handful ever taking place anywhere in Ontario at large—before promoter Lee Baxter seized the opportunity and made Tsagouris-Torres happen, despite neither being a member of his roster.

With every reason to be caught up in personal achievement, Tsagouris' selfless attitude and working-class worldview shines through.

"I can win a fight and not put on a good show and not be happy with myself. People pay good money. I've sold tickets, they're expensive. So I want them to get their money's worth," says Tsagouris. The bout itself exceeds expectations in terms of excitement. Torres is known as a shifty switch-hitter who likes to operate on the perimeter of the ring and dull the tempo of the fight—in boxing parlance, a "spoiler." So while Tsagouris has a reputation as a thrilling pressure fighter, even matchups between a committed aggressor like her, and a mover like Torres can oftentimes turn into monotonous cat-and-mouse chases.

On this night, however—be it through Torres' bravery or Tsagouris' effective pressure—Torres decides to stand in the pocket with surprising regularity. The hometown favorite has a chance to take part in the messy, physical brand of fight she likes.

In some ways, women's boxing in general weeds out spoilers like Torres. As rounds are limited to just two minutes apiece, there is a sense of desperation in each round. There's only two minutes to impress the judges, and moreover, you have more energy to do it than you would fighting a full three-minute frame. Not only that, but opportunities are limited in women's boxing. Fighters bounce around weight classes and take fights under conditions male fighters never would because another chance might not come around any time soon. And when it does, you'd better not be boring.

In the third round, the two come together in a clinch, and Tsagouris hits Torres with five laboured shots behind the head. This infuriates Torres, and the very next time they come together, she replies with a late shot. Even during the furor, Tsagouris' expression never changes. There's never a tinge of anger directed toward her opponent, no matter how animated Torres gets, or how liberally she chooses to bend the rules.

At the end of eight two-minute rounds, it's apparent to most ringside observers that Tsagouris should be the victor, albeit in a hard-fought battle. But in Tsagouris' corner, there's still uncertainty. It's her third attempt at a world title—having lost to Hyun Mi Choi in 2011 in South Korea, and in 2008 to Ina Menzer in Germany.

So when the decision is read, announcing Tsagouris as the victor via unanimous decision, she falls to her knees in happiness and relief.

Tsagouris has been a professional boxer for 14 years, through the darkest era of women's boxing. Her beginnings came too late for the boom caused by Christy Martin and Laila Ali, and her prime now just a bit too early for the potential Golden Era led by Olympic heroes Claressa Shields and Katie Taylor.

Shields recently became the first women to ever headline a premium cable event in the United States, and earned a payday that although not officially reported, was known to put Showtime over its usual budget for a ShoBox telecast. Taylor, meanwhile, has become a mainstay on Sky Sports broadcasts, where her fights are often given billing over notable male contests on the card.

It's a time of great opportunity, at last, for female fighters. Just as Ronda Rousey was able to do for female mixed martial artists, the emergence of Shields and Taylor has narrowed the wage gap (if only incrementally) and increased mainstream demand for female fights—even if they're only the ones involving them, for now. In Ontario boxing circles, Tsagouris has always been viewed as a creator of opportunity for other fighters. As a reliable ticket seller, Tsagouris' presence on cards in the province has helped events take place. Less popular male fighters have benefited from her popularity, and have been given higher billing and often higher payouts than her.

On this night, she was finally given the co-main event slot she'd deserved all along, and earned the world title that had escaped her.

With that title, she becomes an attractive target for fighters in and around her division like Taylor—less accomplished as a professional, but with television and big United Kingdom money behind her. Fights such as one against Taylor would undoubtedly net her the biggest paydays of her career, with the presumption of foreign promoters being that she would serve as a stepping stone for the next generation.

Even if that proves to be the case, Tsagouris has been a vanguard in her profession, and has opened doors for other female fighters to achieve more than even she has been able to. That blazing of the trail can be interpreted as a greater achievement than that of those who traverse the newly paved ground.

As she stands in the centre of the ring, a world title belt in one hand and her daughter in another, with roughly 4,000 satisfied fans surrounding her, Tsagouris is asked who she would like to fight next.

"Maybe ask my daughter. She knows the fighters better than I do."

It’s Not a Cliché: Everyone’s a Winner at Golovkin-Jacobs