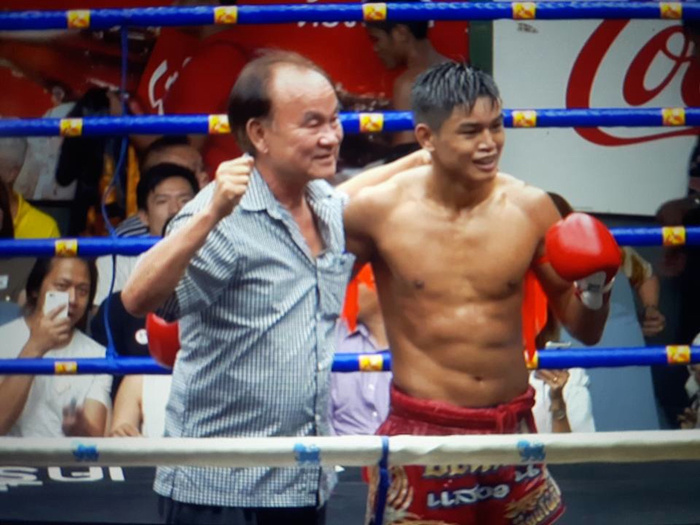 Most farangs (foreigners like you and me) are clueless about the Muay Thai scene in Bangkok. All we ever hear, and read about, in the West is hot air about the big named likes of Saenchai and Buakaw. We never get to hear, or read, much about the current players of note on the fight stage. They don’t get the attention. They don’t get the recognition. I’m kind of glad about that. The fewer idiots in the West who know about the good fighters in Bangkok to rip off and/or copy the better, I say.

One big star of the Bangkok Muay Thai scene is the child prodigy Sangmanee Sor Tienpo. Aged 19 and a bit, he’s been fighting as a pro ever since he was 6-years-old and “the Million Dollar Baby” is to Muay Thai what Mozart was to classical music—an exemplary, finely tuned, all-round stylist and a spectacle to behold. Born Pongsakorn Sittidech, in Khon Kaen, Thailand in 1997, Sangmanee’s exact fight record is unknown. His official record is 123 fights, 99 wins (21 by KO), 20 losses and 4 draws. But, as Sangmanee has been fighting ever since he was 6-years-old, it might be as many as 300 bouts.

And this is why kick fighters from Thailand are shit hot. They start young and are highly motivated because they come from nothing. Sangmanee was no exception. His old man was a part-time nak muay (Thai boxer) and full-time field hand who often fought to put food on the family table. Growing up in this environment, and noting the disparity between the pay for a fighter and a field hand, Sangmanee was eager to become something that his father wasn’t—a big dough fighter in Bangkok.

Balancing school life with kickboxing, Dad set up a gym at home. After some months of training Sangmanee, he got on his motorbike to scour the Thai countryside and set up fights for the 6-year-old southpaw. It proved to be a lucrative money making machine. Sangmanee, with Dad in the corner, cleaned up the regional competition and Bangkok came calling.

Aged 15, Sangmanee packed up and relocated to the capital city of Thailand to wage eight-limbed war in the big league (and, I hasten to add, to carry on with his school education). At 13 Coins Gym in Bangkok, he was in blessed company. Sangmanee was training alongside Saenchai, his favorite fighter, and the magic was rubbing off. He won a number of Lumpinee and Rajadamnern titles between 105-115lbs and made a name for himself going up against some of the best guns in Bangkok, including hardy assed pugs like Prajanchai and Superlek, to get voted “Fighter of the Year” in 2012.

2013 was a golden year for Sangmanee. The teen titan won six bouts and lost only one. Over a savage and highly competitive twelve-month period, he thoroughly dominated the Bangkok circuit—thrashing big name dudes like Mongkolchai and old foes like Prajanchai. In February 2014, the young lion won the new King Fighter tournament at New Lumpinee Stadium, outpointing Superlek in a showy clash of limbs and mugging Superbank in the finals to bag a purse of 300,000 Baht ($10,000). 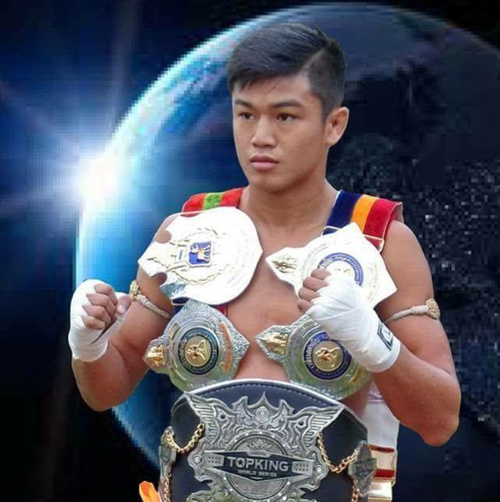 Despite the glowing start to 2014, the rest of the year was a hectic calendar of decision losses against Thaksinlek, Luknimit and the perennial 125llb bogeyman, Thanonchai. After a loss on points against Thanonchai, (his fourth grueling contest), Sangmanee, an otherwise healthy, clean-living teenager, fell mysteriously ill and was rushed to hospital. Doctors ran tests and found a deadly cocktail of Nordazepam, Temazepam and Oxazepan in his system. Sangmanee, the rising star of the fighting art, had been poisoned at the event by some unsavory characters in the Bangkok fight scene.

What made seventeen-year-old Sangmanee a target? Simple: he’s difficult, dangerous, possesses superlative timing, technique, and, much like western boxing’s Floyd Mayweather, possesses the rare ability to tune in to the rhythm and tempo of his opponents. No wonder someone wanted him out the way, no wonder somebody wanted him dead and cremated. Sangmanee alive and kicking was just too darned good to try and beat up fair and square. 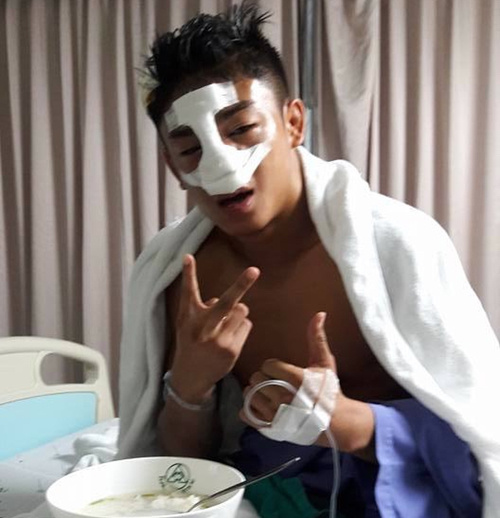 In 2015, the teenage hero made a speedy recovery from half past dead to fight again. Nothing was going to keep him down. He was, after all, a child prodigy, born and raised to wage eight-limbed war in the ring. He won eight top-level fights in a row against the likes of Pet-U-Tong, Sean Paranchai, Muangthai “the elbow king,” and his old pal Thanonchai. The winning streak, however, was broken at the end of the year by another bogeyman opponent, Thaksinlek.

2016 was a rocky road for Sangmanee. There was a loss on points to Muangthai, yet another epic loss to Thanonchai, followed by yet another epic win over Thanonchai (!) and then a dramatic TKO of Muangthai in June. With a shortage of game dancing partners, Sangmanee was matched up against Thaonchai in another two encounters in July and September. Sangmanee lost by decision in the first, and, despite getting his nose broken, drew in the second contest. That brings the tally of Sangmanee versus Thanonchai bouts up to nine thus far (and counting).

After getting his nose fixed at the local hospital in Bangkok, Sangmanee finished 2016 with two wins over Changsuek and Kongsak at Rajadamnern Stadium. 2017 promises to be yet-another fight filled year for the hardy lad from Khon Kaen province. It began with a draw over China’s Han Zihao at the Top King World Series and there is much demand for a tenth bout with Thanonchai. The fans can’t get enough of these two duking it out and it’s too lucrative a contest to turn down. The takings for the gate at Rajadamnern Stadium in their last encounter were an enormous, by Thai standards, $80,000.

Aged only 19 (he turns 20 in March), the teenaged pugilist doesn’t seem to be bored by the grind. At this stage, in his battle-scarred career, it’s safe to say that Sangmanee will be around for some time to come. Watch this space for details.