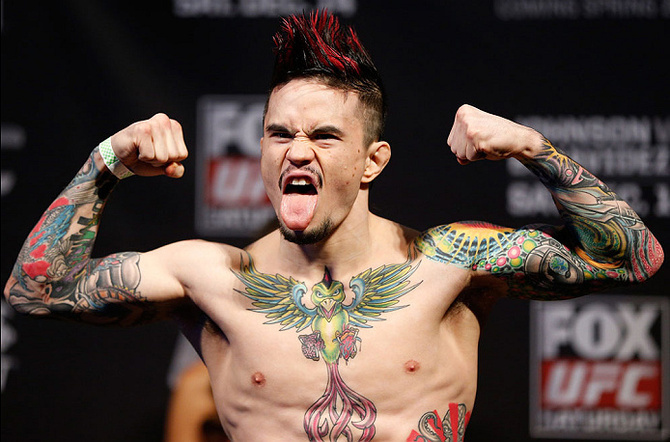 Every tattoo fades. Along with pain, that fact is a certainty that everyone expects after a date with a needle, and that seeming inevitability makes Scott Jorgensen’s situation all the more unique: As his Vitiligo has caused the pigment to leave his skin, the ink drilled into his flesh has only grown more vibrant. The UFC flyweight’s body is an uncommon billboard for Brad Huntington at Six Daggers Tattoo, Rick Trip at Trip Ink, and Blanco at Hart and Huntington, the artists that have put their handiwork on his skin over the past 13 years. Before Jorgensen fights Jussier Formiga at this weekend’s UFC Fight Night: Shogun vs. Henderson 2 in Natal, Brazil, Fightland spoke with the Utah resident about why skin without pigment is the best canvas, being a tattoo trailblazer in a family of cowboys, and his personal journey from getting tattoos imbued with meaning to getting robots that looked cool. That journey started with misspent student loan money.

Scott Jorgensen: I had everything paid for when I was in school—I took out student loans to have fun on. It’s the most ass-backwards way to approach college. My loan had just come in and as a freshman in college wrestling, and our season was done about halfway through. All we had was practice and workouts with the starters, and I had finished up tournaments for the year. So I went and got tattoos … I got two small Japanese kanji on each arm up on my shoulder. The one on my right is “fighting spirt,” and the one on my left was “gain victory.”

I didn’t know what to expect when I first went in. It’s like being scratched pretty deep and fast. It stings—I don’t know, I started on what I feel like is a pretty safe location, high on the meaty part of my shoulder, so it didn’t bother me. Now, like 120 hours into [getting tattooed], it doesn’t bother me at all. Unless you get it down on your tummy. Your tummy hurts.

I’ve never told them to stop, I’ve never needed a break. To me, a tattoo, getting a long session done, it’s kind of a test of your manhood. So I’ve always just toughed it out. I know some guys will get tattooed and say, "Okay, I need a break, every 10 minutes I need a break." So I feel like, if I'm getting tattooed and I’m choosing this, I just gotta deal with the pain. So I just deal with it. Eventually, the way I feel about it, it just goes numb. You don’t realize it's happening anymore.

I come from cowboys. My dad owns 15 acres, raises cattle, owns racehorses, saddle horses; he’s a vice president for an excavation company. My grandpa ran a BLM wild horse management [area] in Utah for years, my other grandpa owns racehorses and a cattle ranch in Utah, so I come from a very cowboy family. When I started getting tattoos, I was the first one in my family, out of my cousins and everybody. I think it was a shock to a lot of people.

At 31 years old, if I went and got a tattoo tomorrow and showed my mom, I’d get the same reaction I got when I was 18. And it’s: “That’s fucking ugly. You need to remove that.”

I’m kind of an impulsive guy. If I see something I like, I’ll buy it. Brad [Huntington] has tattooed on me for so long, I’ll call him and be like, “Hey can you tattoo me today?” “Yeah.” “Alright I’ll be in.” I’d show up and I wouldn’t really have an idea. He’d sit down with a full set of colored Sharpies and draw everything out in the colors he’d want to use and be like, “You like that?” "Yeah." Over the years, I just had enough faith that Brad has his stuff together. He knows what he’s doing. He knows what I like.

I don’t think any of my tattoos are real serious and I want em to be kind of fun. I’m a big kid at heart, man, I like cartoonish looking stuff. I’ve got an 8-year-old son, so we watch Adventure Time, Uncle Grandpa, a lot of Cartoon Network stuff. Then, obviously, Adult Swim, like Robot Chicken and shit like that.

I don’t have a whole lot of tattoos with a special meaning. I just like 'em, I like the designs and the pictures. The first tattoos I got, they meant something—when I first started I thought they had to mean something. Then I shortly realized they don’t, that you can just put whatever you want on there and call it art.

I wanted some screaming bird, and it so happened that my hair was always called the warhawk, so I got this crazy, colorful, cartoon bird with a heart and a brain in his claws. I have a saying before I fight that I tell myself over and over again: Take their heart, take their soul. I guess they have a little bit of meaning, but I don’t look at ‘em like that. They’re just artwork. 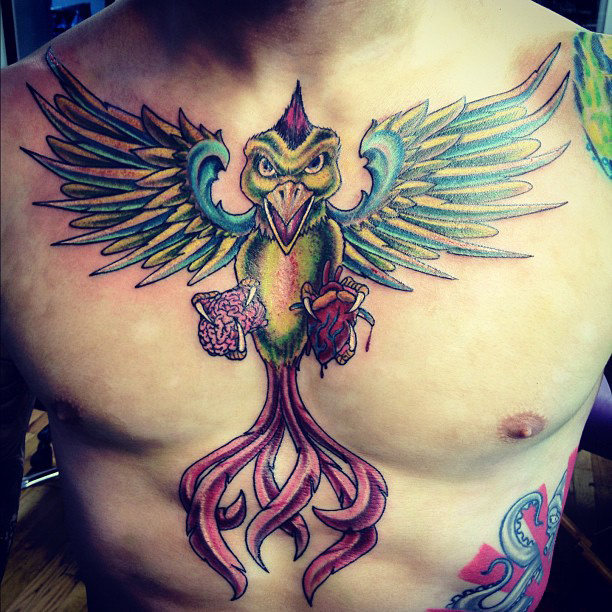 Having the Japanese rising sun with the octopus wrapped around it, I guess that’s an homage to my heritage—I’m half-Japanese. And as we started on my right sleeve, I had him tattoo “No Mind,” which is kind of my philosophy. You don’t worry about the outside world when it’s time to do work. Just focus on the task at hand. 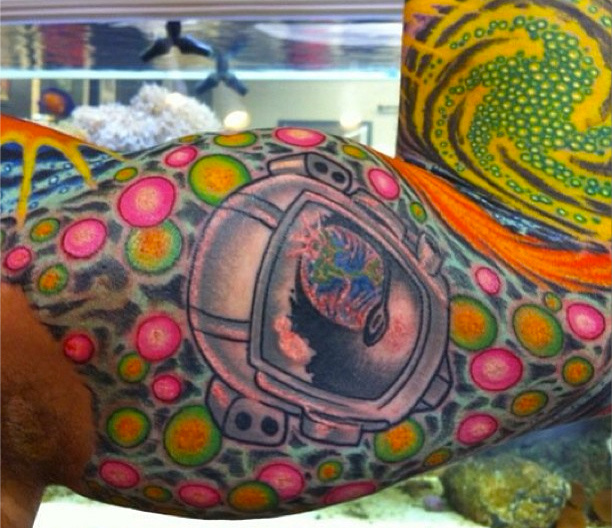 On my left sleeve, I wanted a rocket ship with my son’s name on it. And wrapped within that whole space-themed sleeve is something I always tell my son: Everybody always says “the sky’s the limit,” but there’s so much more out there than just the sky. Beyond that, there’s infinite space forever, and you can go as high as you want.

On my left shin, I have a robot that says Team Moraes. Right before I fought John Albert, I told my jiu-jitsu coach [Diego Moraes] that if I submitted him, I’d put a Team Moraes tattoo on me. I think he thought I was joking. 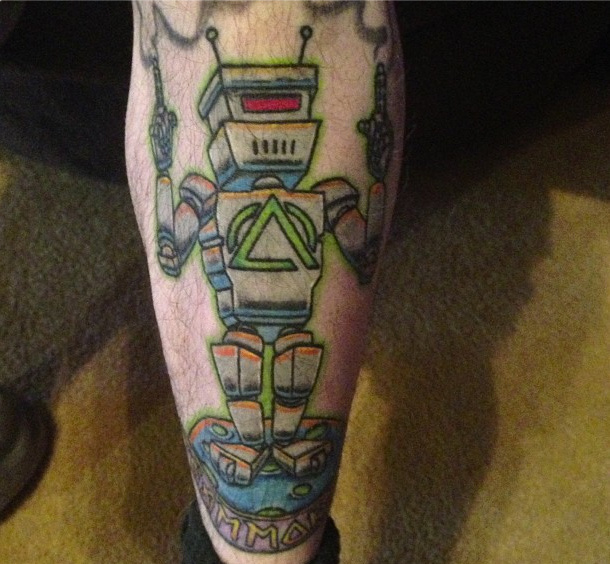 A lot of people ask me, “How’d you get your tattoos so bright?” And you know, I have Vitiligo, and because I have Vitiligo, I have no pigment. That’s why I’m full white now—if you saw my older fights, like my first one in the WEC, I was dark. That’s how I was growing up: In the summer, I’d tan as dark as a Samoan kid. Having Vitiligo basically got rid of all my pigment. I mean, I have great artists, but the coloring shows through because it’s coloring on a white piece of paper versus a brown piece of construction paper. I eventually did a full sleeve on my right arm because I realized the color is so vivid. I keep getting more tattoos and people think it’s to cover stuff up. But I was never ashamed of my Vitiligo or worried about it. I just happened to really enjoy the fact that I could get such vivid tattoos, whereas other people may not have that same ability. And it gives me another way to say, “You think I’m tattooing myself because I have Vitiligo, but I’m tattooing myself because my tattoos look phenomenal. And yours look like shit.”

The World According to Luke Stewart, MMA Fighter/Tattoo Artist