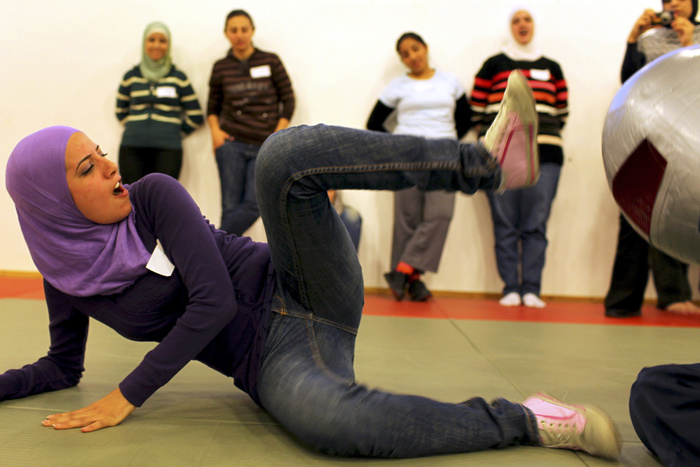 In the wake of Donald Trump’s presidential win, America has become an even more terrifying place for marginalized people. As of November 16, the Southern Poverty Law Center had counted over 700 post-Election Day incidents of harassment and hate crimes. And, despite Trump’s asking the perpetrators to “stop it”—which he issued with all of the passion of Wally P. Doyle’s widow begging east and west coast ventriloquists to end their deadly feud—the deplorables have shown no signs of slowing down any time soon. Left with few other alternatives, vulnerable people have been turning to martial arts in an effort to defend themselves.

According to a recent article by Erin Gloria Ryan in The Daily Beast (“Women Hit the Gym Before Trump Gets In,” which is really worth reading in its entirety), martial arts and self-defense classes have seen “unprecedented spikes in business” since Trump’s win.

All five of the New York City-based gyms, organizations, and instructors that Ryan interviewed for the story said that they’d seen a surprising rush of students over the past two weeks, which is particularly surprising given that Thanksgiving is usually a slow time for training.

Numbers are up at self-defense classes. Inquiries and membership are increasing at completely unexpected numbers at both the Krav Maga Institute and Radical MMA. The Center for Anti-Violence Education in Brooklyn has been particularly overwhelmed. “Executive Director Tracy Hobson says what she’s seen in the last week is the biggest spike in interest in classes since her martial arts-meets-advocacy organization’s founding 42 years ago,” Ryan writes. “Hobson says her organization has fielded requests from upstate New York, from North Carolina, from Pennsylvania. In one case, a Muslim-American group requested self-defense training for 7,000 people. Hobson says 300 people RSVP’d to a multiweek self-defense and violence de-escalation workshop the organizational periodically offers. Their facility can accommodate 25 at a time.”

Ryan notes that many of the schools and instructors that she contacted for the story said that they’d noticed a significant increase in the number of women, Muslim Americans, and LGBTQ as a part of their suddenly growing numbers. In some cases, they’re already planning seminars to address the needs of their new students. Radical MMA head instructor René Dreifuss explained some of his vision to The Daily Beast:  “In hate crimes, the patterns of attack can be very different [than non-hate crime attacks]. If you’re a member of the LGBTQ community, you’re probably going to be approached by more than one person, it’s usually two on one or three on one. They triangulate you. They back you into some sort of corner and they bum rush you. They trap you first, they corner you first.”

On a much smalle—but no less urgent—scale, a similar shift in self-defense lesson supply and demand happened in Canada when a wave of post-Paris attack anxiety (no doubt fueled by the aftermath of a hate-filled campaign run by former Prime Minister Stephen Harper) lead to a surge in anti-Muslim incidents in the country last fall. This led to Muslim people—particularly Muslim women in Toronto—taking up martial arts. “Instead of letting the actions of some hateful bigots or some people who want to take it out on a minority, instead of letting them dictate my life, I’m going to take the action into my own hands,” 17-year-old Ola Mobarak told the CBC last November.

These lessons didn’t just teach the young Toronto women how to deal with the immediate threat of attack, they also aimed to help them learn how to navigate a world that might be hostile to their very existence. “There’s a misconception that self-defense is learning how to punch or kick something like that, but no,” Marium Vahed, a self-defense student with a karate background, told the CBC. “It’s actually a lot about simply being aware of what’s around you.”

And it appears that their American counterparts are now looking for something similar. “I do think it helps people build their confidence right now,” Tracy Hobson told The Daily Beast. “We see this with survivors. Self-defense helps them gain their confidence, helps them move in the world with their whole selves. And I think that’s not to be underplayed.”

How Honor Blackman Brought Women's Self Defense to Television