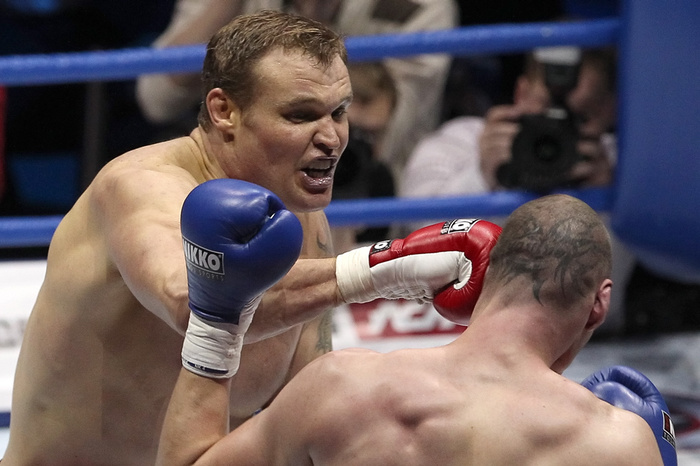 In 2001, a kickboxer named Mirko 'Cro Cop' Filipovic made the transition from kickboxing to mixed martial arts and became one of the young sport's most recognizable knockout artists. In 2002, a gangly mixed martial artist by the name of Semmy Schilt completed the talent trade, going to K-1 to kickbox. But where Filipovic's rise and fall has been extensively documented, it is easy to overlook Schilt: the also-ran mixed martial artist who became the most successful heavyweight kickboxer of all time.

Many kickboxing fans were keen to dismiss Schilt as a fighter who was only successful due to his size alone, but giants in kickboxing are not at all rare. From Jan Norte to Hong Man Choi there are fighters whose size has accounted for their extremely limited success, but they have all fallen apart under the scrutiny of real, top-flight kickboxers. It was Schilt alone whose size was equaled by his skill and he fought in a way which accentuated all of those physical gifts. Though I'm certain on the flights to Japan, with his knees up by his chest, his gifts were not such a blessing. Schilt was a natural left-hander who fought from an orthodox stance meaning that almost all of his offence came from his nearest, longest weapons.

By 2012, Schilt was already known as the greatest tournament fighter in kickboxing history. Where individual fights favor the man who is most adaptable with months of training and footage to study, one night tournaments leave a fighter with no idea of who he will face. Often even if he gets to the semi-finals or finals he will be meeting a reserve fighter who wasn't even in the bracket to begin with, such is the unpredictable nature of the tournament. Through his expert use of his lead leg, Schilt took home four K-1 Grand Prix titles. In his last K-1 Grand Prix victory in 2009, Schilt took just under six minutes in total to stop Jerome Le Banner, Remy Bonjasky and Badr Hari.

Unfortunately by 2010 it seemed the secret was out. In the 2010 K-1 Grand Prix, Schilt met his old rival Peter Aerts for their fifth match. The record stood at 2-2 but by grit and aggression alone, the old Dutch Lumberjack was able to keep Schilt on the back foot and take the decision. This came a year after Badr Hari overwhelmed Schilt in the first round through aggression and overhand rights at the upright giant. If you didn't get caught on the end of his lead leg, Schilt could be overwhelmed. Schilt was not seen through 2011 and it looked like the ageing giant might be on his way out.

Schilt returned to the kickboxing scene in 2012 and it was a very different place. K-1 was bankrupt and GLORY was kickboxing's new promotion on the scene. At GLORY 1, Schilt easily handled the one-dimensional gatekeeper, Errol Zimmerman in May.

On New Years Eve 2012, Schilt returned for what would turn out to be his final night in the ring as part of a one night, sixteen-man heavyweight tournament. Heavyweights like Daniel Ghita, Gokhan Saki and Ricco Verhoeven were believed to be the future of the game while Schilt's peers like Jerome Le Banner and Remy Bonjasky were absent or relegated to 'super fights' and Peter Aerts was forced out in the opening round. The two fighters who reached the finals would have fought three times before the deciding fight started, that was more in one night than any K-1 Grand Prix. Schilt was thirty-nine years old and there were young wolves everywhere who fully understood the blueprint to overwhelming the giant. Or at least the old blueprint...

Schilt was not just a giant. He was a student of the game. In the time off he applied himself to shutting down the exchanges. The wild and wooly brawls between the outfight and the clinch where he was getting hurt was not such a problem anymore. There were hints of it against Zimmerman as Schilt rolled behind his shoulders and elbows to deflect Zimmerman's powerful right hands.

In the opening round of the tournament, Brice Guidon attempted to overwhelm Schilt and found himself hitting nothing but shoulders and air before getting tied up. Another important facet of Schilt's game is that he maintained his flexibility extremely well. He was not a lumbering giant who could scarcely lift his knee to his chest. Schilt could arc in knees from the side to the head of standing opponents. He floored Glaube Feitosa with one such knee back in K-1. Schilt looked more aggressive than ever as he forced Guidon to the ropes and arced in a left high knee behind the six-foot-six Frenchman's guard. Guidon shelled up, Schilt backed off, and as Guidon opened up to jab he was met with Schilt's legendary intercepting jab which sent him to the deck for the first time.

One normal sized fighter who uses arcing knees like this while jumping is Masaaki Noiri.

Guidon found himself stuck on the end of Schilt's legendary front snap kick and each time he pushed in as Schilt retracted it, Guidon ate the thudding jab. One more jab sent Guidon to the mat and Schilt was through to the second round.

Here Schilt met Ricco Verhoeven, the man who at the time of writing is the GLORY heavyweight champion. From the opening bell Verhoeven attempted to swarm on Schilt and was immediately tied up, though his head caused a large bruise to form around Schilt's left eye.

Schilt looked more comfortable under fire than ever before as he rolled off shots and pushed Verhoeven away with ease.

And each time Verhoeven ended up inside Schilt's reach, he had to worry about the knee strikes. This was hammered home early as he narrowly escaped a knockdown from a knee. A less lenient referee would have scored it as such.

From then on whenever Verhoeven got close enough to trade and felt Schilt's gloves taking a hold, he clung for dear life.

In the exchanges Schilt's lead leg and hand carried him ahead in the same combinations which had carried him through so many tournaments before.

In the semi-final, Schilt met the surging Gokhan Saki. Saki's blistering hand speed and heavyweight hitting power often made up for his being an undersized heavyweight. Though Saki's speed has allowed him to deal with bigger men such as Daniel Ghita, he had no way of getting inside on Schilt who jammed all of Saki's kicks and rushes to the infight with a simple knee raise.

Saki was forced onto the defensive and Schilt pounded the smaller man with low kicks which knocked him off of his feet. Schilt took an unquestionable decision victory and was on to the final. Ghita was the big hope for the future of heavyweight kickboxing—a dexterous and powerful kicker, the six foot four Romanian was undefeated in his past ten fights and only one opponent had survived the distance in that streak. Liver kick finishes, high kick finishes, Ghita had even sent opponents home early with broken arms from kicks.

Ghita was the first opponent of the night who did not attempt to imitate Aerts and swarm Schilt. The problem was that Schilt had been winning these tournament fights with his B-game. His A-game was the measured distance fighting where he could pound home his reach advantage and his dexterity with his lead leg. Front kicks to the body, round kicks to the lead leg and body. Long one-twos when Ghita neared the ropes. Ghita took a pounding at range and soon his hands started to drop, just as so many fighters' had before. And here Schilt's dexterity and flexibility showed themselves once again in doing something giants just don't do.

Schilt threw up a quick left high kick and Ghita collapsed to the mat. It was the same sneaky left high kick that downed Badr Hari in the 2009 Grand Prix and it came from Ghita standing on the end of Schilt's range, eating kicks to the body until his hands dropped. Semmy Schilt had won a fifth heavyweight grand prix at 39-years-old. And that was the last time that Schilt stepped in the ring.

Schilt announced that he had been diagnosed with a heart condition a few months after the event, which would make him reconsider his future career. Many around him and in the sport of kickboxing insisted even until a year or two later that he wasn't officially retired, but it has been four years now and it seems unlikely the giant will return. But there is absolutely no denying it: however you spin it, Schilt is the most accomplished heavyweight kickboxer of all time. What's more, his last night in the ring saw him battle off four opponents and show clear improvements to his already unique and effective style. Very few fighters will ever be allowed to go out so impressively.

Nate's Turn: The Divergent Paths of The Brothers Diaz

Rick Story: King of the Spoilers