Shamrock vs Gracie III: This Time It's Irrelevant 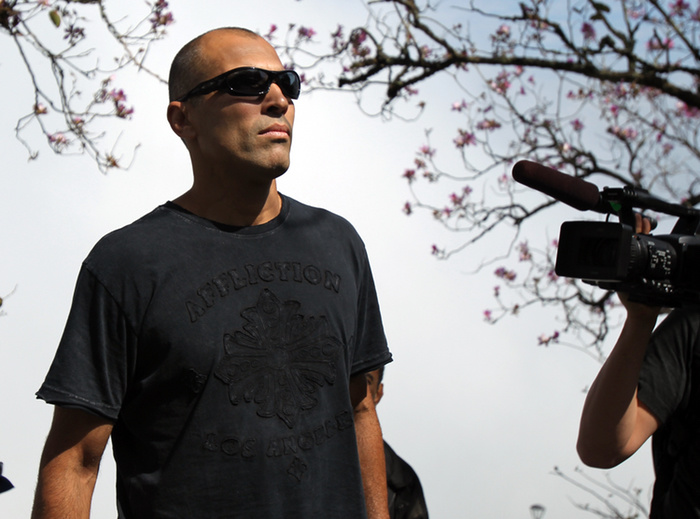 Royce Gracie and Ken Shamrock met as the best fighters in the UFC 1 tournament, and Gracie's wily Jiu Jitsu skills carried him to victory over the much more athletically gifted, but less technically refined Shamrock. Two years later, after Shamrock had cut a swathe through the Japanese MMA scene and Gracie had won three more UFC tournaments, the two met again and fought to an extremely underwhelming thirty-six minute draw. Twenty years on, Bellator has booked Shamrock versus Gracie III. Neither is a champion, neither has won a meaningful fight in over a decade, and the sport has passed both by. So why even bother booking it?

Two and a half million viewers. Of their own free will, two point five million people opted to watch Ken Shamrock and Kimbo Slice wheeze their way through a sloppy one round fight at Bellator 138. In November of 2014, Tito Ortiz and Stephan Bonnar's twilight years bout drew almost two million viewers as well. When Bellator headlines with the actual top notch talent that is has under its banner, no one seems to give a damn. Instead everyone wants to watch fighters who they remember from the turn of this century and viral video stars who have proven to not be competitive against competent MMA fighters. I can only hope that Bellator's leading man, Scott Coker, is as upset by that fact as I am. I hope it pangs at him every time he is pushed to build a card around a main event that he—as the man who found and nurtured the talents of Luke Rockhold, Daniel Cormier, Ronda Rousey and so, so many others—knows is exploitative, lazy tripe.

In fairness to Coker it's probably not his fault. He created a monster: he found a way to bring in ratings, and now the big wigs at Viacom are breathing down his neck and saying “No, not Will Brooks or Daniel Straus. Give us some more of those freakshow fights!” The question is when this appeal to nostalgia and morbid curiosity will drop off. There's some evidence to suggest that it already is a game of diminishing returns. Tito Ortiz's bout with Stephan Bonnar was a tremendous success in the ratings. His follow up match against Bellator light heavyweight champion and legitimate talent, Liam McGeary, was nowhere near as successful.

This weekend Bellator 149 is headlined by not one but two ludicrous displays. In the co-main event Kimbo Slice takes on his supposed long time rival Dada 5000, though it will go on the record as Kevin Ferguson versus Dhafir Harris. In the main event, the flagship of the Bellator 149 card and the reason for fans to tune in, fifty-two year old heavyweight, Ken Shamrock will attempt to pick up his first victory since 2010 against forty-nine year old welterweight, Royce Gracie who in turn has not even fought since 2007.

Shamrock and Gracie's first bout was decided by Shamrock falling back for an achilles lock without a knee between him and Gracie. Gracie simply followed him back.

I do not hold this against Shamrock, Slice, Mr. 5000, ors Gracie. I hope that the fighters are taking Bellator for all they are worth. I hope that both Shamrock and Gracie, legends of the sport, never have to fight again after this and can warm their homes by burning piles of Viacom cash. But do you know the reason that fifty-year-old men don't typically get to compete in the legitimate MMA organizations? And why we don't tend to book open weight fights any more? Because in a young and controversial combat sport where most are desperate to avoid a high profile fatality, doing either with frequency would be an excellent way to get people killed.

A Brief Recap of the Last Decade

It is hard to tell who this fight is aimed at. Anyone who knows Shamrock and Gracie well enough to know about their rivalry already saw their second fight, wherein Shamrock sat in the guard with the biceps ties and headbutted Gracie while Gracie did nothing but heel kick his kidneys and look repeatedly for an Ezekiel choke that just wasn't happening. It was a thirty-six minute draw and it is universally considered one of the worst fights to ever take place in sanctioned MMA.

The fight was over half an hour of this.

Royce Gracie has always been good for a headline. On a slow news week someone in the media will ask him for his opinion and he will respond with something which is totally out of touch with reality. From criticizing the younger members of the Gracie family for attempting to learn the striking and wrestling portions of MMA, to claiming that Royler Gracie 'dominated' Eddie Bravo, the man is easy traffic for your MMA website. How well he will draw as a fighter in 2016 remains to be seen. But then I suppose that it's a bit more understandable that fans might not remember the decline of Royce Gracie because he hasn't fought in a decade. Casual fans might know the name yet not remember how poorly he faired almost immediately once fighters began to learn the rudiments of Brazilian Jiu Jitsu.

After Shamrock stalled him out in the guard in their 1995 rematch, Gracie took five years off. He came back to compete in the PRIDE Grand Prix against Kazushi Sakuraba, who had just submitted Royler Gracie. Royce began what would become a grand tradition by moving the goalposts and demanding his own ruleset—insisting on no set number of rounds and that the referee not stop the fight even if a submission were fully applied and a limb was broken, citing the early stoppage of Royler's bout with Sakuraba. Over ninety minutes Gracie was outclassed and his corner eventually threw in the towel.

Then came the pair of bouts with Hidehiko Yoshida under various weird rules. The first of which was a grappling match and saw Gracie stuck underneath the heavyweight judoka in an Ezekiel choke or sode guruma jime if we're getting into the spirit of style versus style silliness. The referee believed Gracie to have been choked unconscious but when the fight was stopped Gracie's immediately sprang up and began complaining. In the rematch Gracie insisted full MMA rules be in effect, wore no gi, and showed the world his striking en route to a mediocre draw.

In 2004, Gracie went to K-1 and took on Akebono in the latter's MMA debut. Akebono lost because that's what Akebono does.

On New Years Eve 2005, Gracie took on the much smaller but considerably more skilled all around fighter, Hideo Tokoro in a two round draw which was actually a pretty good performance.  In 2006, he returned to the UFC in one of their more exploitative main events as he took on welterweight champion, Matt Hughes. Gracie had done nothing to earn it, everyone already knew that the game had passed him years before, and Hughes brutalized him.

Finally in 2007, Gracie took a rematch against Kazushi Sakuraba in the United States under the K-1 banner. Gracie's reported payout was $300,000 to turn up and make the Antonio Inoki sliding kicks for three rounds. Gracie was somehow awarded the victory, then tested positive for Nandrolone. Ridiculously, the result has not been overturned, making Ken Shamrock and Kazushi Sakuraba the only fighters anywhere close to rounded mixed martial artists that Gracie has ever beaten.

Ken Shamrock is a tougher sell in 2016 because anyone who saw his fight with Kimbo Slice remembers him failing to finish from a flattened out back mount and being knocked out by the first punch he took. Having been stopped by strikes ten times, nine of them coming in his last twelve fights, there is no reason to speculate over Ken Shamrock's chin anymore. He cannot take the shots that heavyweights put out.

But hold on there. Shamrock has not been submitted since his second loss to Minoru Suzuki all the way back in 1995, which was rumored to be a work to get the King of Pancrase title off of Shamrock before a big UFC fight. Discount that and you're talking all the way back to Masakatsu Funaki in September of 1994. In against the undersized Royce Gracie who never learned to do anything of use on the feet, Shamrock is going to be in little danger of a knockout loss.

Unless he walks onto a savage head kick.

I love watching Ken Shamrock highlights as much as the next guy. I'm bugging UFC Fight Pass on Twitter to put up the Pancrase library every week so that I can watch him tear through Pancrase in chronological order. As for Royce Gracie, it took tremendous guts to get in the cage with gigantic, hardened fighters back in the early days of the Ultimate Fighting Championship. Both men are due your respect, but the heart which both men have shown throughout their career is also a sort of stubbornness. They will keep taking meaningless fights and if you keep watching them, Bellator will keep tempting them back.

So do yourselves and the sport a favor: support the wealth of talent fighting under the Bellator banner but skip out on the exploitative, downright insulting main events. Watch Bellator 149, treat Emmanuel Newton and Linton Vassell (legitimate top fifteen light heavyweights) as the main event, and then change the damn channel. If Viacom and Bellator have their eye on the ratings as fixedly as they are rumoured to, maybe it will make a difference.

Dan Severn Would Return to Fight Winner of Gracie-Shamrock