Shane Mosley Wins by 6th Round KO Over Ricardo Mayorga 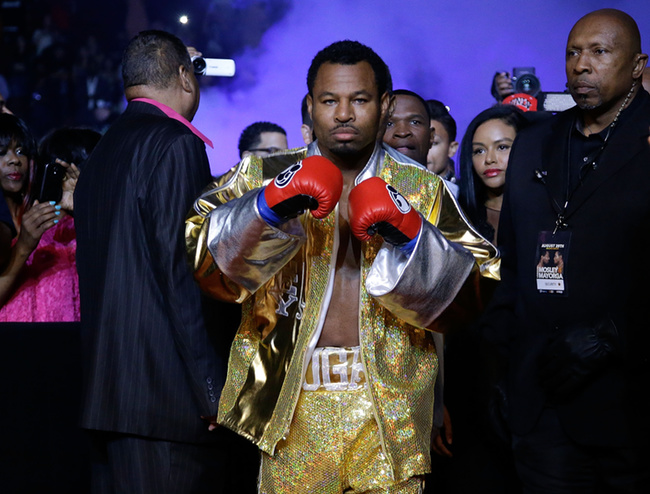 The lead-up to the unanticipated rematch between Shane Mosley and Ricardo Mayorga has been nothing short of a sideshow, the first being why the fight was put on in the first place. In an interview with ESPN in July, Mosley had this to say:

“Mayorga was talking [trash] and I ran into him in Vegas. Things escalated and, boom, rematch…He’s been mouthing off on Twitter for months now. He needs to be shut up. If there’s anybody that needs his [behind] kicked, it’s him. … I’m going to give him a beating for his Tweeting.”

Maybe it’s all an appeal to the social media generation and I’m just way out of the loop, but this is the first time I’ve known Twitter to have ignited a match up. But sure, whatever to get the fight going, I guess.

The performances that followed, however, would be no better. In the initial press conference between the two, Mosley smacked a cigarette out of Mayorga’s mouth that caused scuffles from both entourages, but overall, the entire conflict appeared as a contrived attempt to drum up interest in the fight. Then came the infamous butt slap of Mosley’s girlfriend, which an investigation later revealed to be completely staged. This kind of made you shake your head at the levels at which boxing promotion had fallen. If fans were hoping the action of the actual fight would redeem all the pre-fight misfires, they would be sorely disappointed.

Weigh-ins saw Mosley tip the scales at 159.4 lbs and Mayorga at a 165.4, which turned the bout into an odd hybrid middle/super-middle weight fight that was originally planned for the super-welterweight division. Without any major belts or ranking on the line, the weights mattered about as much as the bout itself did. To Mosley’s credit, despite the extra weight, he came into the ring looking relatively in shape and performed accordingly. Mayorga, who earned the opportunity more for his mouth than any boxing ability, came in pudgy and uninspired.

The keys to the night were Mosley’s overhand right and left hook. He landed the first all night to set up the second, and a left hook to the body was what put the Nicaraguan down and out at 2:59 of the 6th round, about half the time it took to close the show in their first meeting. From an objective boxing standpoint, Mosley looked decent, moving well and landing accurately, though it was also against an out-of-shape, over-the-hill, 41-year-old fighter.

And Mayorga has never been a skilled boxer to begin with. He’s always had poor form, even poorer footwork, but his youth and wide-swinging power hooks saved him in his prime. On Saturday night, age and weight revealed those defects even further, and his saving graces would never show up. The only thing that did show up was Mayorga’s bravado, which peaked in the last minute of the third round where the Nicaraguan invited Mosley land a couple of hard rights to his face, shook his head, and grabbed his crouch in response. That, sadly, was probably the highlight of the night.

It wasn’t a horrible fight, but it wasn’t a good one either, and it definitely wasn’t worth the $49.95 PPV tag it carried. But I get it. Mosley is trying to launch his own promotional company, and boxing shows are expensive to put on; the revenue has to come from somewhere. But Mayorga? He shouldn’t have been anywhere near a boxing ring on Saturday night, let alone fighting in one.

There came a point in the fight where the taunts stopped and Mayorga just took the shots and nodded, almost as if to convince himself that he still carried a semblance of what he once had. It was kind of sad, actually. At the end of the fifth round, cameras panned over to Mayorga’s wife, distraught and crying at the sight of her husband being beaten while holding one of their ten children in her arms.

After the fight, Mayorga announced on his Twitter that he’ll have one more farewell fight in Nicaragua, and then that will be the end of the “El Matador”. If you care about the sport and its fighters, then this is a good thing. Also on his feed, Mayorga wrote this:

“We fight for feed our familia. We try hard but it’s not enough. Boxeo is all we know how to feed familia.”

It shouldn’t be this way. If there’s anything to take away from Saturday night, it’s that fighters like Mayorga still having to rely on his body for a paycheck is a sad reality of boxing. Perhaps a retirement plan needs to be implemented into boxing, or at least some sort of counsel on personal finances for the fighters. Something should be done, so that fighters won’t have to subject themselves, or the public, to a debacle like the one that took place on Saturday night.

A Fight Worth Watching: Miguel Cotto vs. Canelo Álvarez