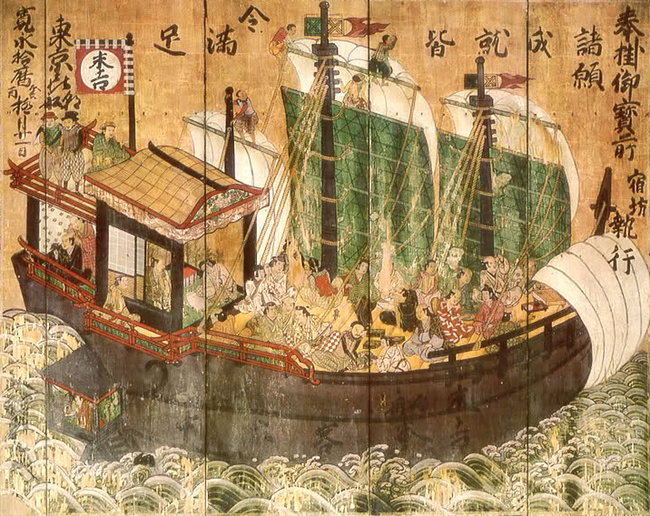 There can be no martial artists without pirates. They feed off each other, trade places with one another, and in romantic cases wander the earth in search of each other. Our modern day pirates could be the bullies so often cited by mixed martial artists as what first drove them into martial arts.

In East Asia they have the Wokou, “dwarf pirates,” who are referenced as far back as the 4th century for their pillaging ways. Over time the term came to mean “Japanese (pirate),” as victims tended to be Korean and Chinese fishing villages, and although not entirely accurate, the Japanese mainland did export many a raider over the past 2000 years. The Wokou reached a peak in the 15th and 16th centuries, when civil war raged across Japan, the Ming Dynasty was teetering, and the Korean Joseon Dynasty was about to be overrun by Hideyoshi.

Interestingly enough, a sudden explosion in martial arts, both in practice and in literature, also occurred during this period. Previous Chinese dynasties (Tang, Song, Yuan) barely mention the martial arts in literature or in military affairs, but suddenly during the Ming, great generals are writing about the Shaolin staff style. Here is what scholar Meir Shahar writes about the period:

“References to the Shaolin martial arts appear in a variety of late- Ming literary genres: military encyclopedias, martial-arts manuals (of the Shaolin school as well as its rivals, which defined themselves in opposition to it), geographical compositions (local gazetteers and monastic histories, as well as travelogues and poems by visitors to the temple), historical writings (such as chronicles of the sixteenth-century campaign-in which Shaolin monks took part-against piracy), epitaphs (of Shaolin fighting-monks) and even fiction (in classical and vernacular idioms). These wide-ranging sources reveal that Shaolin military activities captured the attention of diverse segments of the Ming elite.”

All things martial were popping during this period. Mongols from the north, Turks in the west, Wokou from the east, and fifth column dissidents of every stripe from within. The Ming army was in shambles and defenses porous. One of the most interesting episodes of this period is a definitive step by the Shaolin Monastery towards the “warrior-monk identity” and the trial by fire they had in several pitched battles with the Wokou in southeastern China. 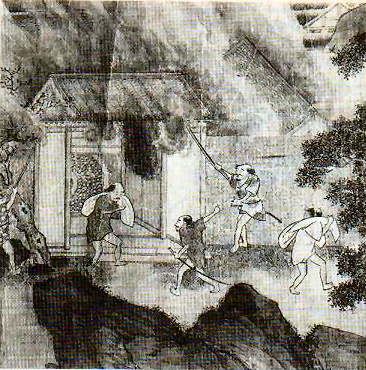 Attacks by the Wokou, Fourteenth-century painting

Zheng Ruoceng, a contemporary chronicler of the campaigns against the Wokou in southeastern China, compiled “The Monastic Armies First Victory” and had this to say about Shaolin’s warrior-monks:

“In today's martial-arts, there is no one in the land who does not yield to Shaolin. Funiu  [in Henan] should be ranked as second. The main reason [for Funiu's excellence] is that its monks, seeking to protect themselves against the miners..., studied at Shaolin. Third comes Wutai [in Shanxi]. The source of the Wutai tradition is the method of the "Yang Family Spear"..., which has been transmitted for generations in the Yang family. Together, these three [Buddhist centers] comprise hundreds of monasteries and countless monks. Our land is beset by bandits inside and barbarians outside. If the government issues an order for [these monks'] recruitment it will win every battle.”

In the four battles that we know of, the monastic troops recruited by the Ming military to help fight the Wokou won three of them. In one battle, the monks reportedly chased down a band of 100 pirates and slew them all, including at least one pirate-wife. Most reports from the field and from later historians heap praise upon the loyal, skilled monks who came to the aid of State when it needed it most.

Even if the impact of a few hundred monks didn’t turn the campaign, they did have an incredible influence on the Shaolin Temple itself, the fame and identity of later Zen Buddhist warrior monks, and also on later martial artists and military strategists. The fame would spread so far and wide, that the next dynasty would feel compelled to burn the Shaolin Temple to the ground. 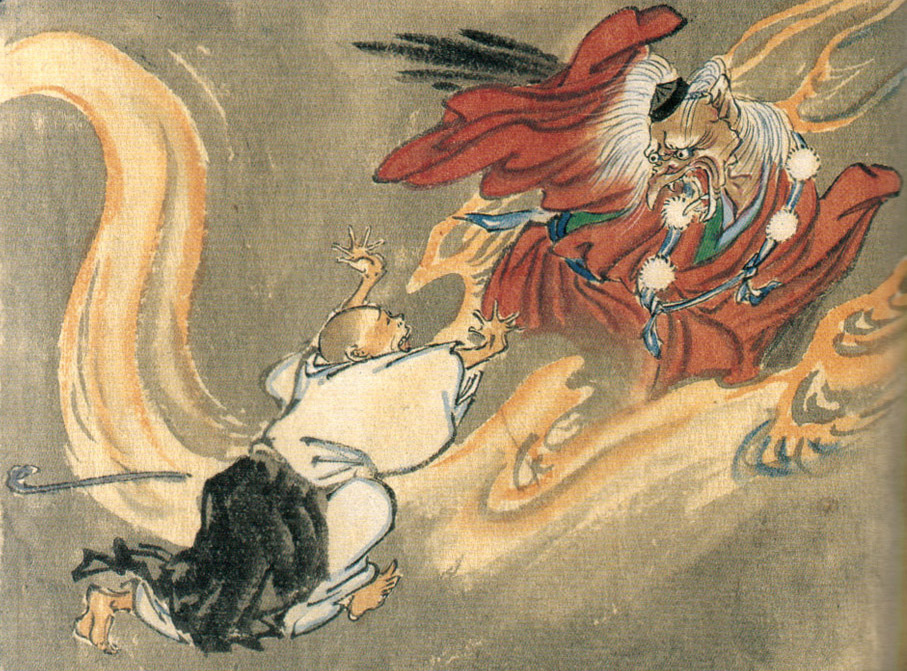 Thin Line between Warrior and Pirate

Zheng Ruoceng describes in detail how a monk took an iron staff and cut down the wife of a pirate during one of the battles. What could contribute to such ruthless fervor amongst the purportedly Zen monks who trained martial arts as a means of self defense and enlightenment?

One explanation is raised in contemporary passages like this one, from a high-level Ming official named Wang Shixing:

“Henan monks never obtain ordination certificates. Today they shave their heads and become monks; tomorrow they let it grow and return to the laity. They are allowed to do as they please. Therefore, whenever the White Lotus Teaching emerges, there are thousands upon thousands who join it, and the government has no way of investigating. Bandits. .. also frequently shave their heads, change their appearance and join the monastic order. Once their troubles are over, they return to the laity. No matter whether they are sedentary or itinerant, you won't find one monk in a hundred who does not drink wine or eat meat.”

It’s important to take the dissolution of the state into context. When the Ming disintegrated it also meant that internal trade faltered leading to famine and lawlessness. Fake monks who could gain a bit of state support through campaigns to rid the countryside of bandits (former comrades?) may be more likely to chase down the enemy to the last man, and slaughter anyone left standing. The “monastic armies” were also little more than bands of a few dozen to 100 monks. Other bands enlisted by regional lords with waning authority and waxing problems could have been bands of who know’s what, with tenuous ties to local temples. It was also very common for martial artists to roam the land searching for financial gain (performances, bodyguards, and work clearing out bandits) under the auspices of the romantic “seeking a worthy foe” ... did all of these wandering boxers wield righteous fists?

It’s not uncommon for kids to shave their heads today and pretend to be monks on the glittering streets of modern China; the Shaolin monks themselves face accusations of fakery and greed. Many kung fu schools in China give students the “well water and river water” speech, explaining how martial artists and pirates are entwined, Yin and Yang, feeding off one another and drawing each other into the rivers and lakes of the martial world.