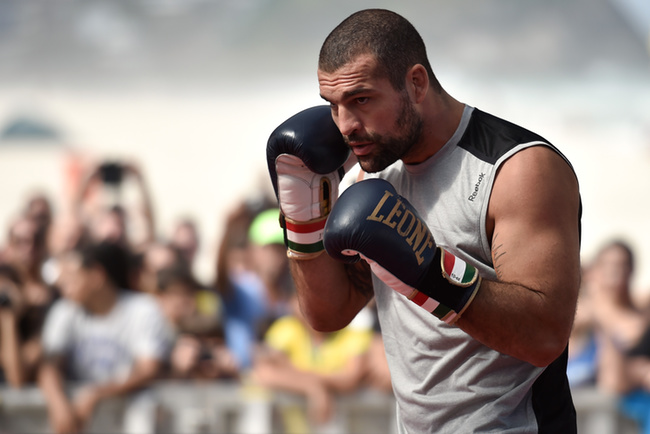 Fist fighting is no sport for old men, and yet event after event the”'treasures of bygone ages” are trotted out to fill co-main events and get butts into seats.

Part of it panders to the delusion that your favorite, out-of-date fighter is just two or three good strikes away from putting together a winning streak and making one last run at the title. Part of it is just that we like names we know. Why would you watch a legitimate bantamweight prospect when you can watch the same light heavyweights from the turn of the century take uncomfortable beatings?

And so at UFC 190 we have Mauricio 'Shogun' Rua and Antonio Rogerio Nogueira in a rematch of their 2005 barn-burner which means little to the grand scheme of anything and has next to zero chance of living up to the original. But in promoter speak that's “the rematch a decade in the making”.

But that first fight, between a 10-1 Rua and a 11-1 Nogueira, was one of the finest scraps I've seen in MMA to this day. I've spoken before about how fans love 'signature moves' of sorts that they can grab onto, between Rua and Nogueira, the two went back and forth with every gimmick and quirk in their games and it was astoundingly beautiful and in many ways ahead of its time.

Right from the get go, Rua hit a trip and landed in Nogueira's half guard—a very ballsy thing to do considering the accomplishment of both Nogueira's from their backs. Nogueira immediately scooped up the underhook and began to get underneath Shogun's base, straightening out the trapped leg to act as a lever—what is known as deep half guard.

Usually deep half sees the bottom man threatening between coming out the back door or coming up on the single leg, either way he improves his position. Nogueira went to this all night long. Bearing in mind that debate is still raging over whether deep half is really MMA viable to this day, and that he was doing it in 2005, against one of the most dangerous ground and pounders in the game, that's some feat.

When the two returned to the feet, the big surprise was that Nogueira lit Rua up with his sharp counter striking. A lot was always made of both Nogueira brothers' boxing, but in truth Big Nog was pretty rudimentary and never learned to get away from the blows, Lil Nog was where the pugilistic skill could be found in that family. A southpaw, Nogueira tattood Rua with sharp right jabs, and rockaways to counter left straights. Rua was left swinging wild and looking largely overmatched in this portion of the fight.

A picture perfect counter right hook sent Rua down momentarily and had him reeling.

But Rua's trips in the clinch were spectacular. Every time he got hit hard, he'd grab a hold and fling Nogueira to the floor like it was nothing. Now, smart fans know that while Shogun hits hard everywhere, but where he really excelled was on the ground. Particularly under PRIDE's rules which permitted soccer kicks, stomps and knees to the head of a downed opponent. I've written about this before—while it's brutal and alienates a lot of fans, there was certainly an art to it and Shogun was the master.

Shogun's best guard pass, bar none, was the jumping stomp. Because only one leg needed to circumvent the opponent's guard, and then he would leap and raise the other so that the opponent's feet would pass under the knee of his stomping leg, the highest point.

Another Rua favourite was to tap the opponent's feet apart and stomp through the middle. Not to mention this nice lead leg kick around the side—which Fedor used against Big Nog.

While Rua had limited success against Nogueira's simian leg dexterity...

...he repeatedly dived into the guard with superman punches—the kind he later used to leave Alistair Overeem out cold.

Rua performed at least two dozen jumping strikes against Nogueira's guard through this fight, and when he was stuck inside it he worked away with punishing elbows to the body and punches to the head. He only snuck his way to side control a couple of times through the bout, but he quickly showed why he was so feared from there by raining down a couple of knee strikes.

Another technique which Nogueira went to which is now all the rage in competitive Brazilian Jiu Jitsu was the kimura from half guard into the armbar by walking across the opponent. You'll see competitors like Keenan Cornelius have tremendous success getting the kimura grip from half guard and then pivoting around the opponent to attack that same arm with their body. In one instance, the legality of kicks allowed Rua to turn this into almost a guard pass.

What this fight, and his later fight with Ricardo Arona, really hammered home was that Rua was far from a slouch on the ground. We knew he was talented there, just not how talented. Every time Nogueira seemed close to springing his trap, Rua would wriggle free and punish him. This peek out in answer to the front headlock (where Nogueira's brother loved to attempt his anaconda chokes) was lovely.

As the fight dragged on it became wilder and wilder. Those clean counter shots were no longer so stinging, but Shogun kept winging. Finally, as a left straight landed on his head, Shogun connected the big swing of his own and sent Nogueira to the canvas.

Not only did Shogun have a head like a bowling ball to keep taking blows, but he had the heart of a lion to continue under constant fire while he was being dissected on the feet. But the fight was far from done. Nogueira fought back every instant of the final round and as the fight came down to the wire, no-one knew who had it.

The judges ruled in favour of Mauricio 'Shogun' Rua and he advanced to the semi-final of the PRIDE middleweight grand prix—a night on which he knocked out Alistair Overeem and Ricardo Arona to win the tournament. Nogueira picked up just one more win in PRIDE, also over Overeem, before being knocked out by enormous underdog Rameau Thierry Sokoudjou.

The two men have been chewed up and spat out by every elite opponent they've faced lately, but the wonderful thing about fights is that they live on in film and in our memories. Whether they can pull off one more night of stunning chaos, or just looked like old men in a young man's game we will find out at UFC 190.