'Silicon Valley' Takes on the UFC

Since Tank Abbott, Bruce Buffer, and Big John McCarthy appeared in an episode of Friends (“The One with the Ultimate Fighting Champion”) in 1997, we’ve been able to count on some sort of UFC-related plot showing up in a sitcom or procedural drama every season or so with varying degrees of success.

The latest scripted series to step into the scripted Octagon is Silicon Valley, Mike Judge’s wry look at tech culture currently in its second season on HBO. The comedy, which follows a ragtag group of brilliant weirdos and ne’er-do-wells as they struggle to launch a compression technology startup called Pied Piper, has actually referenced MMA before, thanks to a passing Pride joke in the first season. But it officially welcomed the UFC into its satirical mix on the Sunday, May 10 episode, “Server Space.” In that offering, PP rivals Hooli (think a slightly more absurd and sinister Google) announced that they’d be offering a preview of their own compression engine by streaming the latest UFC event, Molina vs Bulgakov 2 on their new platform, Nucleus.

“I can think of no more exciting way to give a little taste of Nucleus to the entire world than by putting video latency in a rear naked chokehold,” Gavin Belson (Matt Ross), the eccentric and megalomaniacal head of Hooli, declared in the announcement. 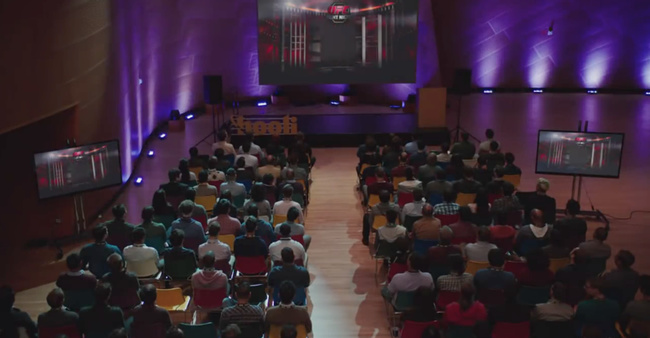 This past Sunday, we got to see the payoff. The latest episode, “Homicide,” kicked off with the launch of the event, complete with a guest appearance by Dana White and some truly fantastic synergistic corporate speak from Belson. “Tonight you’ll get ultimate fighting at the ultimate resolution,” he intoned with great gravity, all while wearing a gi with a Hooli patch on it and a black belt. “Nucleus puts 4k UHD video in a lossless compression chokehold and forces the competition to tap out.”  He then engaged in a series of amusingly bad kicks and punches—complete with screen-shattering graphics—for good measure.

Spoiler alert: the event then collapses in schadenfreude-tastic fashion. Nucleus, which far from prepared for such an undertaking, craps out in the main event and freezes right before a devastating combo which announcer Joe Rogan declares the most ferocious he’s ever seen.

For the purposes of the show, Ilir Latifi and Chris Dempsey play the parts of Molina and Bulgakov, as FOX Spots pointed out last week. Their only meeting—a bout at UFC Fight Night- McGregor vs Brandao on July 19, 2014 in Dublin—plays Molina vs Bulgakov 2. The knockout might not be the most ferocious in MMA history, but it’s still pretty impressive. It was the KO for the week of September 30, 2014 on UFC.com. You can see it in all of its Hooli-free glory here.

As someone who has experience with both watching heartbreakingly terrible live streams of MMA events and dealing with megalomaniacs with delusions of martial arts grandeur, I found the whole subplot hilarious and eerily accurate. But I was wondering how it looked to someone with ties to the Silicon Valley tech community. So I reached out to a friend of mine who codes and trains BJJ with seemingly equal skill and fervor to see what she thought of the episode.

“It wouldn’t surprise me ALL if a technology company latched onto the UFC,” my friend, who wishes to remain anonymous, wrote to me. “Actually, the best part of the whole thing was having Dana White in the commercial (though they should have had him swear more).”

In general, she says the show is pretty on the nose. “Here’s the thing about ‘Silicon Valley’: It's real-life Silicon Valley turned up to 11. I've been in offices and buildings and parties and incubator houses and meetings JUST. LIKE. THAT.

“While I might not personally know a lawyer who plays guitar riffs during business meetings, it's not a story that would surprise me or even seem completely out of the ordinary. I've never done a whiteboard analysis of how many guys one person can jerk off, but I'm sure that if I look hard enough I can find the photos of whiteboard sessions on effective catapult design or a feasibility study of my teenage stoner idea of creating an underground human Habitrail out of those oil tankers you see on trains.”

She had similar things to say about the show’s characters. “There are so many different personality types on the show, and they're all so true it hurts. The eccentric VC, the megalomaniacal CEO, the awkward guy who is a part of your startup for no reason other than he was there at the beginning, the hardcore nerds... actually, the only archetype I don't recognize is the brogrammer. (I believe they exist, but I've never seen them in the wild. I hope there's no captive breeding program.)”

This gave me hope that there are actual real-life Gavin Belson types running around with fudged martial arts credentials and terrible combat demonstrations, but apparently that part was a bit more whimsical. “The fake black belt and Hooli gi are an 11 on the 1-10 scale of SV reality,” she informed me.

Despite the fact that tech mecca is also becoming known for its martial arts talent—the UFC itself just recently opened a gym in the area—my source hasn’t seen much in the way of cross-pollination. “I haven't really noticed any crossover between the two worlds, apart from the fact that there are excellent gyms in the Bay Area: Ralph Gracie's in the city (with head instructor Kurt "Bro You Fucked Up A Long Time Ago" Osiander), Caio Terra's place in San Jose, AKA in San Jose, and Guerilla Jiu-Jitsu in San Jose and Pleasanton,” she said. “I think the missing piece might be the brogrammers. I can't think of anybody I know through SU or Google who really cares anything about MMA, or sports in general beyond Local Team In The Superbowl stuff.”

Google has offered BJJ lessons to its employees, though, and their instructor, Milton Bastos, told me that Facebook also has a martial arts team when I interviewed him last year. So maybe we’ll see more of Belson’s black belt posturing or a Hooli fight club in future episodes.