Sitmonchai Gym and the Balance of Cultures 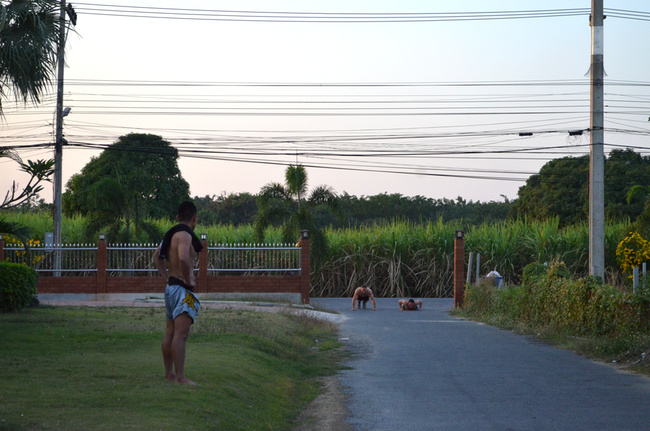 The dense urban traffic of Bangkok loosened up once we reached the suburbs. Another hour cruising through lightly populated Nakhon Pathom province brought us to Tha Maka district in Kanchanaburi. We drove down a rural road sandwiched by sugar cane fields until we reached Sitmonchai, hidden in the Thai countryside.

It was a Saturday afternoon right around the New Year. Training was already underway -- some resident foreign fighters worked with the handful of Thai trainers, others hit bags or shadowboxed on their own. In the far ring, two large, white foreign men donned shinpads and began sparring, pushing each other into corners, wrapping up in the clinch.

This kind of sparring pair, however, is not normal at Sitmonchai—foreigners rarely spar with other foreigners. 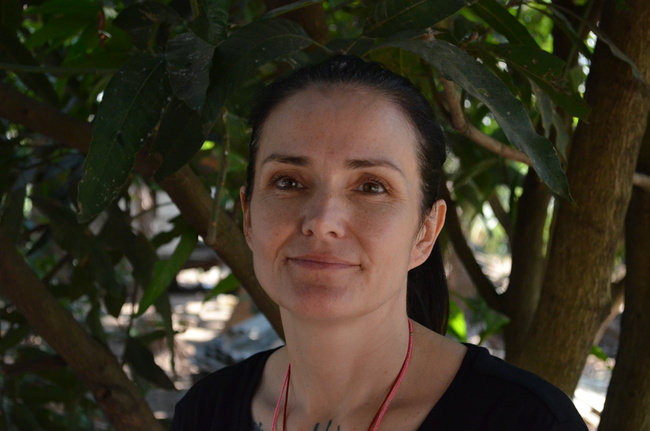 Abigail McCullough, foreign liaison of Sitmonchai and part of the "gym family" for the past five years, spotted the two foreigners sparring from across the gym. She alerted one of the trainers, who had just finished pad rounds. He waited until the pair paused, then stepped in to spar with one of them.

"It's because of the New Year," Abigail told me, explaining the shortage of Thai fighters, most of whom were out of town for the holidays. "They should be back today, though."

Sure enough, less than an hour later a pickup truck arrived and out jumped a half-dozen Thais. The boys had returned. Training would be back to normal by the next day.

Sitmonchai operates on the principle that foreign fighters learn fastest when training with Thais, not other foreigners. Thus, a cap is kept on the number of international fighters accepted at any given time. "We want to keep the balance, keep the gym predominantly Thai," Abigail said. "We don't want to get too foreign-dominated because then what's the difference between this and a gym back home [outside of Thailand]? If you're just going to spar with other foreigners, then what's the point of even coming to Thailand?" 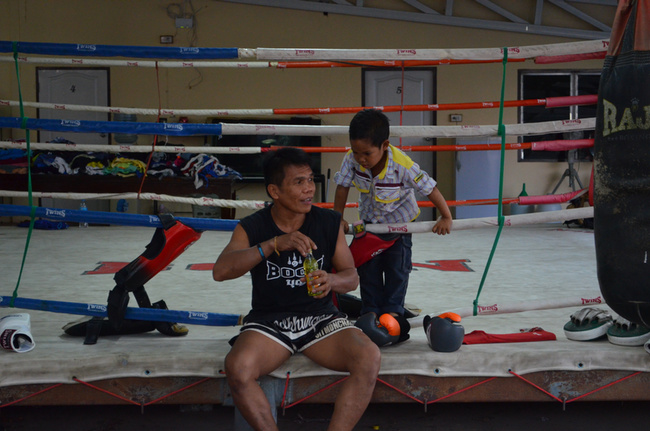 The desire to train with Thais and "like a Thai" in the sport's birthplace is something I've heard foreign fighters repeat often and loudly. It's a hard balance to achieve—gyms with a predominantly Thai population are often not equipped to accommodate foreigners comfortably, especially foreigners who cannot speak Thai. Top-level fighters' gyms in Bangkok and the rural countryside away from tourist areas are often intimidating, inaccessible, or impractical for foreign fighters. Intrepid or adventurous fighters may seek out famous old-school gyms in Bangkok with no internet presence, but for most foreigners I've interviewed, prior communication with management and the security of knowing what to expect upon arrival are major factors in the gym selection process.

For Thai-style gyms open to training foreigners, cultural liaisons like Sitmonchai's Abigail McCullough become vital. Abigail has been the gym's liaison since it opened to foreigners four years ago, and is responsible for communicating with the gym's international clientele, both before their arrival and during their stay. 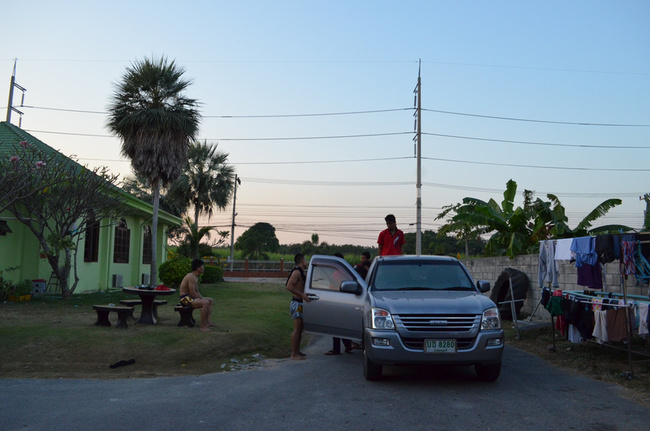 Being the cultural "bridge," as Abigail described herself, between the Thai and foreign populations can be a hard job. "It gets tricky," she said. "There are different cultural expectations. Like when the gym first opened to foreigners, a Swedish woman came to my room in tears after training, said one of the trainers had called her fat.

"Now, if you live in Thailand, you know that that's normal, you get called fat every day. That's how I met P' Ae [the owner of the gym]; I was in the ring at 13 Coins training with P' Rot. P' Ae was staring at me on pads and then during a break he looked up at me in the ring and just said, 'Wow, you're fat!' I didn't know him back then, and I wanted to be like, 'Okay, well fuck you too!'

"I told that same thing to the Swedish woman. I said, 'Don't worry, it's just what they say and do, it's a cultural thing.' She felt better. Afterwards I had a talk with all the Thais and explained to them as a group that it's not cool to call foreigners fat. Little cultural differences like that are really valuable to talk about, even small stuff, like when I told P' Ae to put a wastebasket in the washroom." 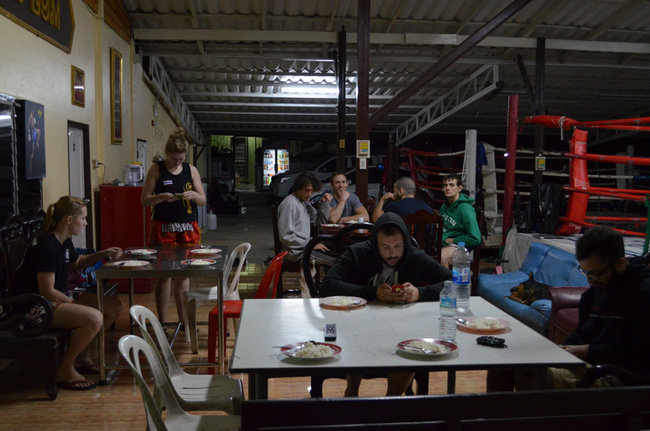 Another cultural habit Abigail tackles is the resident Thais' use of the word farang when referring to foreign fighters. "I personally really hated hearing it at other gyms I used to train at, 'farang-this and farang-that.' I told the Thais, 'Imagine if you went to Canada and you heard everyone in a 7-11 saying, 'Thai person! Thai person!' So now they normally refer to non-Thais as dtaang-chaat, which is more polite, more like saying 'other nationality' or 'foreign national.'"

Abigail, a native of both England and Canada, met the Sitmonchai fighters while they were training temporarily at Bangkok's 13 Coins Gym about five years ago. She started dating one of the fighters, returned with him to Sitmonchai, and thus became the gym's first foreign resident.

Abigail's arrival cracked open the door, but and the idea of opening in earnest to a foreign clientele grew slowly. At first, owner P' Ae was unconvinced. He couldn't figure why anyone would want to train in a place that's "so country." The surrounding town was unsophisticated and the gym wasn't fancy. Why would foreigners come all the way to train at a backwoods gym with a few bags and one ring with carpeting in it? After some convincing on the part of Abigail and a few other forward-thinking fighters, P' Ae reluctantly agreed to allow the first group of foreigners try training at the gym.

It was a success. Less than five years later, the gym has nearly doubled in size. It now boasts two rings (non-carpeted), newly renovated rooms, and a new weight-training area. 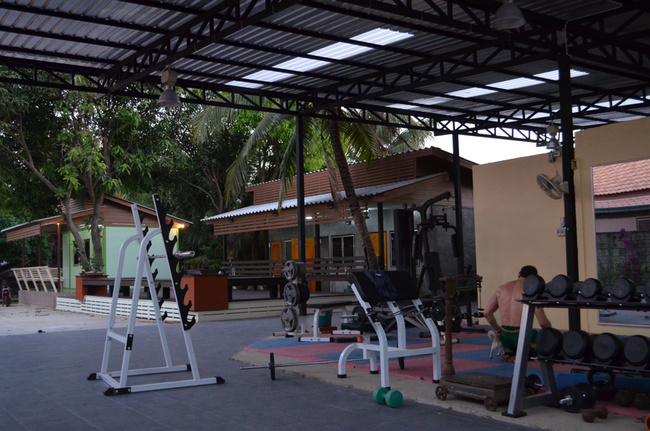 The weights area is a direct result of the new foreign presence. "The Thais had a few rusty old dumbbells they always used," Abigail said, walking me through the recently purchased equipment. "They're very stuck in their ways. I suggested we add this section because a lot of our foreign fighters were telling me they wished we had a bigger area with weights. We just built it a few months ago."

She touched the neatly stacked weights and leaned against one of the shiny new resistance machines. "The best part is that now the Thais and foreigners are teaching each other, and it's not just a one-way street," she said. "Some guys have been coming back here year after year, so the Thais are getting to know them and trust them. Like when we first got these nice new weights, the Thais didn't want anything to do with them. They still preferred their rusty old ones. But now the foreign guys are teaching the Thai fighters how to use the weights and giving them instruction. Even my boyfriend Jun [Thepnimit Sitmonchai] is out here all the time now, lifting weights and drinking protein shakes like how our foreign guys do. It's basically become an exchange of knowledge." 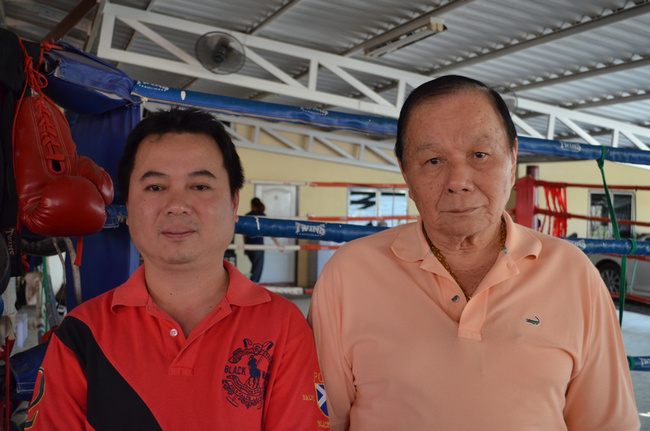 Foreign influence also led to the decision to improve housing for the fighters and trainers. In June 2014, retired police chief Pa Chang, P' Ae's father and Sitmonchai's original owner, attended a Glory Fight event in Los Angeles, California. It was his first time watching any of his boys compete internationally. He saw his fighter's name lit up in bright lights during the match—YODKHUNPON SITMONCHAI!—and realized with pride that the little gym he'd started 35 years ago in his backyard had grown into an internationally recognized name.

When Pa Chang returned to his Tha Maka countryside home a week later, he announced to his son that it was time to fancy up the gym, starting first with the housing. Additional rooms were constructed, brand new furniture was brought in. The roof of the old building was raised, floors were redone. The dinky little kitchen was expanded and a "relaxation area" was built outside the bank of new rooms.

On average, the gym houses about 10 to 12 foreigners at any given time, but the Thai population is nearly double that. There's enough room for the Thais to sleep a comfortable two or three to a room, but most of them prefer to sleep in clumps. As Abigail reminded me, "a lot of Thais are afraid of ghosts." 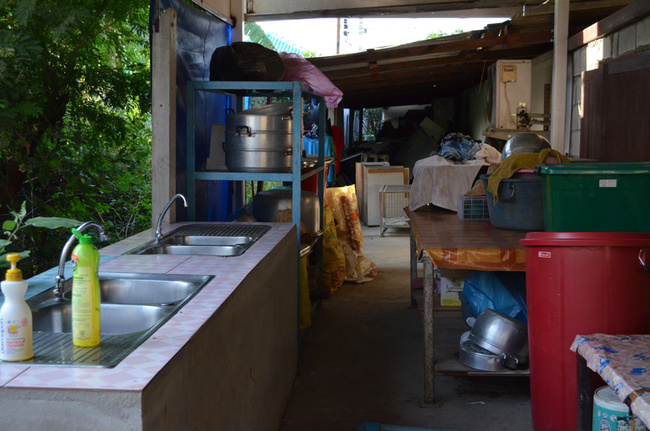 They still like their own space, though. Abigail laughed as she told me about certain foreign fighters who try to stress how low-maintenance they are by couching it in terms of "living like a Thai." She said, "They come in and say, 'Oh I'll just sleep in the ring!' or 'Oh I'm so low-maintenance, I can sleep with the Thais in their room!' And I'm like, 'The Thais don't want to sleep next to you! You think they want you in their room with them? They don't even know you!'"

The sleeping arrangements may be self-segregated, but the gym's training philosophy is opposite: foreign fighters train nearly exclusively with Thais. The easy explanation is that it helps the foreigners improve quickly, but another reason is that it also mitigates certain problems. As Abigail explained, "A couple times when the senior trainers or I weren't here to supervise, two foreign guys have decided to go at it in sparring, and ego gets in the way.

"There's a very different attitude to sparring in the West as opposed to in Thailand. In Thailand, it's all about technique—it's play, it's light, it's often fun—whereas with foreigners, it's hard, aggressive, and people can get carried away really easily. The mood can change in an instant without people even having time to be aware of it. The Thai fighters grow up with [a different mentality to sparring]. This is their livelihood and they have to make money by fighting, so they can't afford to get injured sparring with their teammates. We like to keep it safe, keep all our fighters safe. We're a foreigner-friendly, family-style Thai gym. It's like one big family here." 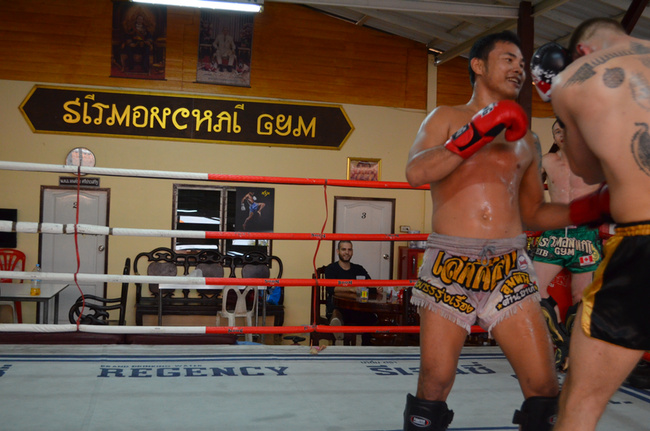 Sitmonchai's Thai fighters also benefit by living closely with foreigners. The gym recently sent one of their fighters, 15-year-old Ley, to Singapore for a short training gig. Ley had begun his budding training career one day last year by holding pads for the other Thais just for fun. Turns out he was a natural, loved holding pads and coaching his teammates. Six months later, he was offered a month-long job in a Singapore gym.

"I think it was a great experience for Ley," Abigail said with pride, "and it's good for the other Thais as well. The other kids see these opportunities, see the routes they can go down. They make lots of connections with foreigners here, and in the end, who knows where that might lead?"

An American Sociologist Is Studying the Behavior of Muay Thai