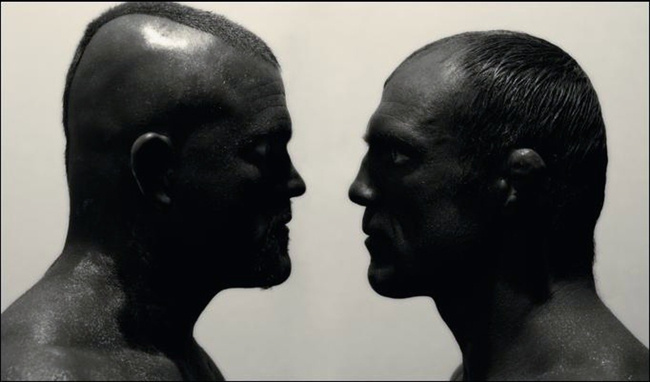 On June 6th 2003, Chuck Liddell stepped into the cage against the thirty-nine year old Randy Couture. Couture was making his light heavyweight debut and coming off of two back-to-back TKO losses at heavyweight. It didn’t look good on paper – an old wrestler fighting for the first time in a new division paired up against a young knockout artist in Liddell, who was on a streak of ten wins, and who was known for being impossibly hard to keep down and for knocking out wrestlers.

It seemed like a showcase match, plain and simple. The UFC had been pushing Liddell like nobody's business. His consistent knockout power and exciting style made him seem like the man who could finally take the UFC out of the bars and into the living rooms. Ultimately Liddell's incredible career did bring MMA a great deal closer to the mainstream, but June 6th 2003 wasn't the night he would do it.

Understand that Chuck Liddell had made a career out of forcing grapplers to work for the takedowns, and then when they finally got one, he'd stand right back up. Popularizing the wall walk strategy, Liddell killed any hopes of holding him down or submitting him. Combined with his incredible knockout power, Liddell seemed to be the only guy capable of fulfilling the commonplace fan desire to see a brawl. “Stand them up, Ref! This is America!”

To most fans it seemed as though Randy Couture, a ground and pounder, would be just another victim of this strategy.

Randy Couture was never the kind of guy to desperately try to keep anyone down, however. Couture did as much damage to his opponent's gas tank by making them work in the clinch and on the ground as he did with his strikes. Couture wasn't a first round finisher at any point in his career, but he always wore his man down and caught up with them later.

In the opening moments of the bout, Couture and Liddell circled. A brief scrap took place, then the two returned to standing in front of each other and looking for an opening. Then, it happened – the moment that would throw Liddell off for the entire bout. Liddell threw a hard inside low kick (because Liddell threw everything hard). Couture rushed Liddell to the fence, picked him up, and slammed him on his back.

The lesson which Liddell very quickly learned was that any wide punch or kick he threw was going to get deflected, stepped inside or caught, and then he would be in Couture's world. Liddell looked stumped so he sat back and tried to jab. But it wasn't a threatening jab, it was a jab that Couture parried, slipped, or took, and then came back with a combination of his own.

Liddell had been reduced to one weapon and it just wasn't working.

By the third round, Chuck Liddell was tiring. Randy Couture got top position and began to hammer away with strikes. They weren't the most punishing strikes you've ever seen, but Liddell couldn't do anything. He covered up and hoped Couture would give up, but referee, John McCarthy stepped in to wave off the fight. In the history of miscalculated showcase matches, this one might just top when the unknown Russian, Fedor Emelianenko, was brought up to fight number one heavyweight contender Heath Herring.

Chuck Liddell looked a little different from then on. He entered the PRIDE Middleweight Grand Prix as the UFC representative and pulled a slick turn-around knockout on a young Alistair Overeem. But Quinton 'Rampage' Jackson stopped him the very next fight, as he was consummately out-boxed and beaten up on the ground.

Liddell returned to the UFC and put together some wins over the formidable Tito Ortiz and the questionable Vernon White (0-2-1 in his last 3). Then on April 16th 2005, the rematch with Randy Couture took place.

Since their last meeting, Couture had humiliated Tito Ortiz and won the UFC light heavyweight title. He had also battered Vitor Belfort to a stoppage for a second time. The excitement for the fight was incredible, and a quick glance at the gate and pay-per-view buy-rate reflect the impact which Couture and Liddell had made on the sport.

Their original match at UFC 43 had drawn just 49,000 pay-per-view buys and a gate of $645,000. By the time their rematch rolled around at UFC 52 (advertised brilliantly by the first season of The Ultimate Fighter, on which they were opposing coaches, and the incredible live finale on Spike TV) Couture and Liddell drew 280,000 pay-per-view buys and a live gate of over $2,000,000.

The second match played out rather differently to the first. Liddell's team seemed to have picked up on one of the slight successes that Liddell had in the initial match. In between the three rounds of Couture domination, Liddell had caught Couture with a short, tight right straight as Couture was coming in. It had been a trade of blows, but Couture had clearly been hurt. Couture being the savvy veteran that he was, he immediately jumped on a single leg, but the chink in the armor was there.

Liddell catches Couture with a sloppy short straight that has little hip behind it, but Couture dives straight into it. Couture ducks in on the single and finishes with a slick foot sweep.

Randy Couture is remembered as a brilliant strategist in MMA, but he could not control the angles of the fight. He could get to the clinch well, and from there he would push his man to the fence, but out in the open he would often just follow his opponent around. This made little impact on the first fight with Liddell because Liddell was standing right in front of Couture most of the time.

In the two rematches, Liddell made a number of slight but significant changes to his game:

-      He improved his lead hand offence. He added an effective jab and a whipping left hook, which he could throw with little commitment or telegraphing.

-      He straightened up his right hand and improved his accuracy with it.

The lateral movement was tremendously important because of Couture's tendency to chase. It is very hard to stay square to someone (as you would want to if you were looking to move to the clinch) if they start circling past your lead leg. You are forced to pivot and face them, and that is time in which you cannot punch effectively. When you hear a coach shouting to his fighter “keep turning him,” that is what they mean.

Notice how Liddell side steps Couture and lands with a right straight as Couture is turning.

And here Liddell gets off line and blasts Couture again as the wrestler turns to keep up with Liddell.

Liddell's jab and lead hook landed effectively as he kept the distance from Couture. Liddell continued to look to side step Couture's rushes and land that right straight. An eye poke briefly stopped the action a few minutes in (Liddell was notorious for these, earning the nickname The Eyesman). When the two got back to action, Liddell timed Couture with a left hook as he escaped to his left.

Liddell ran in and started to swing for the finish as he had against Tito Ortiz, but found himself against the cage with Couture attacking him. Out of this ugly exchange, Liddell remembered his footwork again. Performing the same step outside of Couture's lead leg, Liddell sent the wobbly wrestler past him. Couture turned to face Liddell, and ate that fight ending right straight.

As clumsy as the exchange was up to that point, there is no denying that the side step Liddell had been looking for all fight ended the bout.

In the final fight of the trilogy, bought by 400,000 viewers and with a $3,000,000 gate, Liddell ended the rivalry with the same methods. He jabbed Couture up, forced Couture to chase, and caught Couture with a right straight coming in.

This time, however, the finish didn't come off of the side step, but off of a squared up straight. There are a few ways to throw a hard straight while retreating. One of these is to square up by retracting the lead leg. It doesn't generate power nearly as effectively as driving off of the back leg, but it brings the right shoulder forward (similar to how power is created on a superman punch without the back foot contacting the floor) and allows a nice slip to the left side.

George Groves showed a brilliant example of the same footwork against Carl Froch.

And Oliver McCall knocked out Lennox Lewis the same way.

Were it not for Randy Couture, Liddell would never have improved his movement or developed his lead hand. He would have kept fighting one-dimensional grapplers with zero repercussions when he did get taken down, or missed his strikes. Couture was the first man who made Liddell pay for any mistake he made. The sloppy swinging had to be dropped and more polished set ups and footwork had to be brought into play.

Pick up Jack's e-books Advanced Striking and Elementary Striking from his blog, Fights Gone By. Jack can also be found on Facebook and Twitter.

Jack Slack: The Stun Gun vs. the Hitman