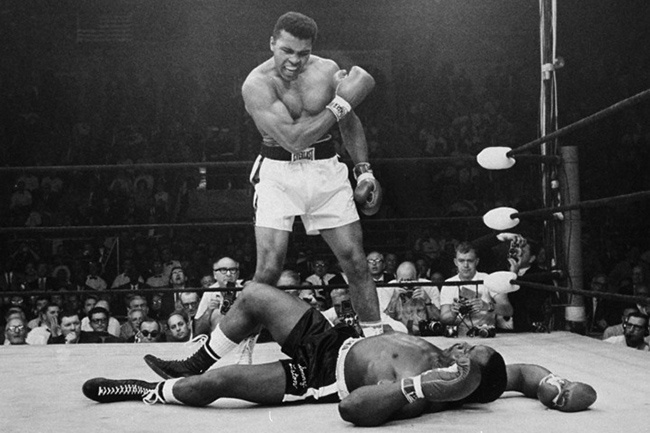 Two days ago a small but significant bomb dropped in the cultural landscape of American combat sports. Former heavyweight boxer Mike Tyson (who--between his tear through the heavyweight division back in the 80s, his tumultuous marriage to Robin Givens, his conviction on rape charges and subsequent jailhouse conversion to Islam, and his cannibalistic attack on Evander Holyfield—was a one-man bomb in the cultural history of American combat sports), in response to a question posed by MMA reporter Ariel Helwani, told the world that UFC light heavyweight Chael Sonnen is a better trash talker than Muhammad Ali was.

First off, let’s just say that when Mike Tyson speaks about trash-talk we should listen, because in his time he was a master. It’s easy to forget, amidst all those terrifying memories of cold-hearted first-round knockouts and wrecked careers, that Tyson was a first-rate talker himself, at his best on a level with the king Ali himself, though entirely lacking in the older fighter’s sense of play. Tyson was dead serious and he called on dead serious historical referents when talking up his fights--the car salesman unafraid to bring up Charlemagne in the name of a sale. Consider this gem:

“I’m the best ever. I’m the most brutal and vicious, the most ruthless champion there has ever been. No one can stop me. Lennox [Lewis] is a conqueror? No! He’s no Alexander! I’m Alexander! I’m the best ever. I’m Sonny Liston. I’m Jack Dempsey. There’s never been anyone like me. I’m from their cloth. There is no one who can match me. My style is impetuous, my defense is impregnable, and I’m the ferocious. I want his heart! I want to eat his children! Praise be to Allah!”

Mike is an expert on the poetic art of the sell. That being said, I think he’s wrong. There is no bigger fan of Chael Sonnen the carnival barker than me, and my respect for his ability to both talk his way into fights he was always going to lose and then talk his way out of ever having to admit he actually lost them knows no bounds. But there is simply no way Sonnen is a better trash talker than Ali.

First of all, from a  simple poetic standpoint, Sonnen’s couplets and rhymes can't compete with the scope of the Greatest's poems. Compare this from Sonnen:

To this from Ali:

Sonnen can rhyme but Ali can summon nature. Ali is a poet: self-reflective, bursting with imagery and imagination. Sonnen is earthbound, a braggart with a silver tongue using words to sell himself and a fight. Ali, by comparison, is in love with words for their own sake, using them both to sell his fights and simply because using them is enjoyable to him. Words are another way for him to display his mastery of the world, to bend it into any shape he wants. Which is the definition of an artist.

Secondly, Chael has a nasty habit of losing to the guys he trash-talks the most. Words are a wonderful thing, and no one wields them with the kind of supple absurdity and malleability that Sonnen does (one moment he’s playing the role of the pro wrestling heel, the next he’s the soul of common decency)—he is a performance artist. But words that aren’t backed up by actions will eventually ring hollow. Say what you will about Ali; he always beat the fighters he gave the hardest time to. Liston, Patterson, Foreman, Frazier: Eventually they all fell to Ali. If not the first time, the second, and the third and forever. In the end he always won, granting those pages and pages and pages full of words a certain poetic prescience and emboldening the theory (first put forth by Ali) that Ali was a man of destiny. Had he lost those fights, Ali would have retired a joker, a colorful side note in the history of boxing, someone to be remembered fondly but without much regard. Which is where Sonnen will most likely end up—as the huckster you loved to hate. And the problem with hucksters is there’s always another one waiting in the wings with a bigger, brassier, and more brazen shtick.

Of course, Ali didn’t reserve his trash talk for just fighters; his scope didn't end at the corner ropes. And that’s really where he puts distance between himself and Sonnen and all other pretenders to his throne. He used his words to attack white hypocrisy, the American government, the war in Vietnam, and any other number of ills plaguing the world he felt (and rightfully so) was his birthright to comment on and improve. Boxing was just a means for Ali, a platform for his evolution. Whether for lack of interest, opportunity, or courage, Sonnen sticks to future or longed-for opponents and stays away from the world outside the Octgaon. His scope is smaller.

Ali was a cultural force, not just a boxing force. His trash talk was always about something bigger than boxing or any one boxing match. Ali may have turned his tongue in the direction of countless opponents over his 20-year career but he was always really talking about Ali—the self-imagined, self-created American man; the larger-than-life character who refused to be hemmed in by the social borders of his or any other time; the world-historical figure who transcended historical realities by simply refusing to acknowledge or accept their power over him. That’s what will always make Ali the best ever: His trash talk was both aimed at his opponents and aiming for something much, much larger. He managed to convert the inherently meaningless art of self-promotion into the most meaningful thing in the world: a tool to raise humanity out of the muck and mire of its own nonsense.