Speaking the International Language of Kung Fu in Angola 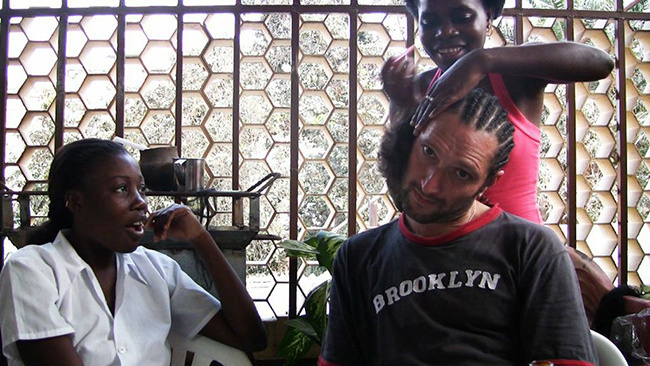 In the months after filmmaker Jeremy Xido left his Brooklyn home, he found one piece of equipment almost as vital as his camera: a kung fu T-shirt with a set of faded Chinese characters.

Xido had traveled from Lisbon, Portugal, to Angola, a country he’d later describe in the documentary film Death Metal Angola, as shaped by, order, “colonialism, slavery, war for independence, and civil war.” There were buildings where people still slept alongside bombs that had failed to explode on impact.

Xido was researching the screenplay of a potential feature when he saw a group of Chinese construction workers rebuilding. Growing up in Detroit he’d failed to develop much in the way of Mandarin or Cantonese, but he had seen a lot of 70’s Kung Fu movies, and while assuming every Asian you see is a martial arts master might not be the most culturally sensitive tactic, in this case it did the trick.

“Every time I saw an Asian person I’d run up to them and they’d see my shirt and be, ‘Ahhh’ and I’d say ‘Yeah, yeah, yeah,’” Xido recalls. “So what we’d do is sort of make fighting gestures. I’d point to my chest and point to me and start Shaolin form, and once they saw that they’d run back to the guy who knew form, and by the end of it I’d always end up inside the construction compound getting drinks and playing cards.”

Two years later, Xido’s martial arts diplomacy has resulted in multiple art pieces. One, Death Metal Angola--now touring the country and absolutely worth your time if you’re lucky enough to be near a screening--documents the efforts of a new breed of metal band trying to rebuild the country’s culture. The other, The Angola Project, is a three-part narrative live-theater piece describing Xido’s efforts to get the film made as he globe trots from Lisbon to Angola to China. Besides being a story about Xido’s personal and professional setbacks, it’s a good reminder of how important fighting can be for national identity.

When Xido’s subjects talk about Angolan culture being wiped out entirely by war, it’s not hyperbole. The country remains among those with the lowest life expectancy and highest poverty rates, and orphanages hold dozens of children at a time. (Xido tells the story of one boy whose stepmother tried to poison him rather than raise him after his biological father died.) But Xido could find a common ground when he talked about growing up watching Bruce Lee.

“Growing up in Detroit in the 70s and 80s, I was the only white kid on my block. And kung fu, and in particular films with it, were huge in African-American communities when I was a kid,” he says. “All my friends were black, and we’d go watch these movies from Hong Kong and movies with Bruce Lee and Jim Kelly. And this was after race riots. And now I can see it having meaning for people in various kinds of, I guess you’d say, resistance movements around the world. It appeals to people who aren’t James Bond. You don’t have all these technical gadgets, but you have your bare first and feet and your soul.”

As Xido continued filming, he found that fighting masters were less athletes or celebrities than cultural ambassadors, and a way for the white kid from Detroit to open intercultural doors.

“Fighting styles are very important [in Angola],” he says. “Capoeira especially has a very special context there. It’s a Brazilian technique partly developed by African slaves who primarily came from Angola. And there are a lot of cultures mixed up in the start of Capoeira and rules and laws and prohibitions on slaves that formed it, but in Angola they claim it as theirs. After all these years of colonialism and brutality it’s a way of reclaiming identity.”

Before leaving Brooklyn, Xido’s personal fighting experience was limited to the Muay Thai training he did after a friend suggested he try it as a way to get over a nasty breakup. He started attending Chok Sabai Muay Thai classes in Manhattan and was fascinated by the way people who spent most of their time in offices would court violence as a way to soothe their troubles.

“It wasn’t about learning to hit people, it was about learning how to take a punch and not run,” Xido recalls. “It was about learning to stay in the ring and continue. The moment I saw that, in this state of heartbreak I’d been carrying around, I wanted to do that and learn how to take blows and not recoil.” Xido’s lessons in Muay Thai dominate act three of The Angolan Project, with the filmmaker personally attacking a heavy bag on stage--yet another reminder of the universality of the fight language.

The Angola Project opened in New York this week to mixed reviews (The New York Times wasn’t sold on Xido’s bag work) but moves next week to Chicago. Check it out if you’re in town, and check here for upcoming Death Metal Angola screenings.