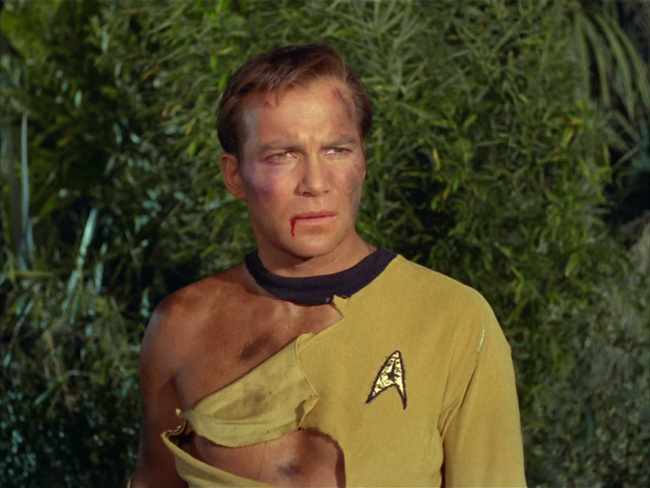 Among all the qualities required to command a ship and its crew, undoubtedly the most important is an officer's ability in hand-to-hand combat. You don't know where you'll be, or what you'll be doing, when your phaser gets knocked out of your hand and goes skidding across the floor. Or when diplomatic discussions and love-making with an alien race will fall through, and you'll have to fist fight for your life.

No man understood this as well as Captain James T. Kirk of the USS Enterprise. Throughout the 2200s, Kirk captained his ship to countless unknown worlds and met a perhaps difficult-to-believe number of hostile civilizations. Often complex political dealings would boil down to a test of Kirk's fighting prowess and he was forced to battle in the knowledge that his failure could leave his crew in jeopardy. Or worse than that—dead. 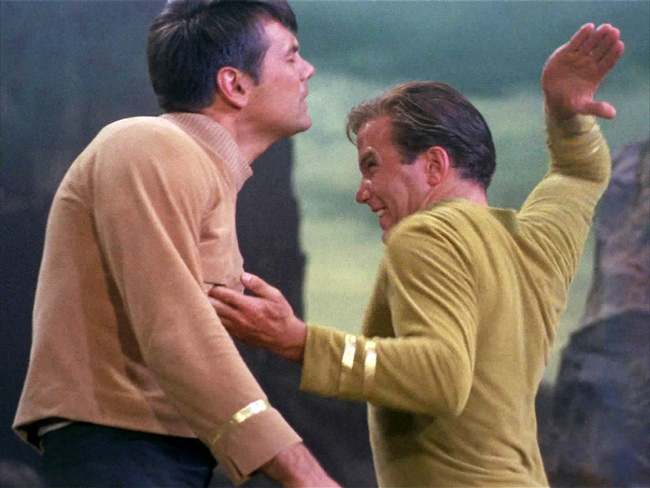 Kirk is remembered for his leadership and his many conquests, but he was a man of letters too. One who read Milton, and who understood the importance of looking to the past. In an age of phasers, Kirk kept alive the ancient fighting traditions of his ancestors, and in this guide we will look at a few of his methods. Perhaps they will help you gain rank, perhaps they will simply make you feel more at ease when you realize that you're the only one in the landing party wearing a red jumper.

One of Kirk's most famous duels was that with the selectively bred warlord, Khan Noonien Singh. With the Enterprise on a course to self-destruction, only Khan stood in between Kirk and the controls. But as Khan asserted, he was five times as strong as Kirk. He was smarter than Kirk. He was even, apparently, a more attractive specimen to women—as hard as that is for us fellows to believe—as he had charmed the fickle Lt. McGuivers into aiding him in his plans. In a bout where he was at such a tremendous disadvantage, Kirk used all of the tools at his disposal.

The axe handle strikes which had served him so well in the past seemed to fail him against Khan. Axe handle strikes, for the ordinary man, are a great way to break your fingers. Perhaps this was bad form catching up with Kirk—who was notorious for not playing by the book.

He later repeated the same mistake against the gorn. As close as he was, even James Kirk wasn't perfect.

With his signature drop kick and axe handle strikes proving ineffective, and his back to the wall, Kirk held Khan off with one of the most under-rated techniques in the ancient arsenal: the head scissors.

This bought Kirk the time to detach a hand pump from the soap dispensing unit behind him, and use it to beat Khan to the floor.

The head scissors is a technique from the foggiest days of antiquity. A classical catch-as-catch-can wrestling technique which would have been regularly visible in Northern England through the 1930s and 1940s, at Wigan's famous Snake Pit gym. A great many variations of it have appeared throughout history. One instance occurred in Khan's own time, as Minoru Suzuki found a crooked head scissors neck crank after attacking with an arm bar against Vernon White. If only Khan had spent more time watching Pancrase in 1993 than he spent trying to force eugenics on the world, he would have been prepared.

Here is a grappling bout from the year 2000, in which the power of the head scissors is also displayed. Takumi Yano plays dead and allows Hideki Kadowaki to move around all over him. Then, when Kadowaki is attacking an arm, Yano throws his legs up, catches a head scissors and starts squeezing. As Kadowaki struggles, Yano jams his fist into the front of Kadowaki's neck, closing off his windpipe. Kadowaki then falls into unconsciousness.

Not only does this demonstrate one of Kirk's choice techniques, it demonstrates one of his most important principles. That of misdirection. An officer should always be looking to lure his opponent into a false sense of security. No matter when, no matter where, there will be a moment to strike. And when James T. Kirk saw it, he took it.

But be warned, reader, in attempting the head scissors or any such flying leg attack on a standing opponent as Kirk did. You will notice that Kirk held the fence behind him. Failing to do this can lead to a reversal of fates as the victim of the head scissors becomes the maker of a power-bomb. The famous early 21st century bout between Carlos Newton and Matt Hughes showed us that.

So there you have it. A fine addition to your arsenal of intergalactic diplomacy. Do not practice, for that would take away from the spontaneity of it. But when you find yourself faced with a choice between giving ground in negotiations or striking first. Strike first, strike hard, and head scissor.

Jack Slack: The Art of Catching the Kick