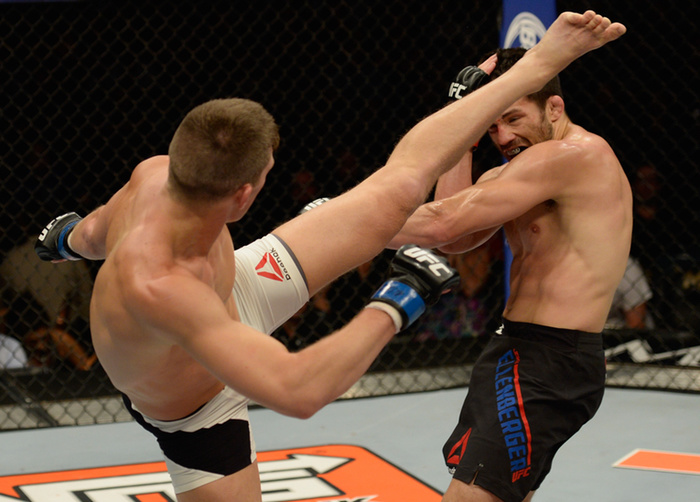 There was a time when Stephen Thompson was receiving the kind of derision that Sage Northcutt is experiencing now. Thompson came to the UFC as a highly touted karate stylist and quickly did away with his first opponent with a beautiful high round kick, so the cries immediately went up “but can he grapple?” In Thompson's second UFC bout he was held to the mat for periods of effective work by Matt Brown—a tough second fight by any estimation—and we had our answer. Thompson wasn't going anywhere if he couldn't get the opponents off of him.

Almost four years on and Stephen Thompson has quietly moved into the top ten of the welterweight division. Perhaps a little long in the tooth now for the 'Wonderboy' moniker, Thompson's grappling has improved tremendously since his UFC debut. What is even more exciting is that this hasn't been a process of rounding out his game, his striking has improved exponentially from having that comfort in every area of the fight. In his weakest area we see a tougher Thompson, and in his field of expertise we see a more adventurous, creative and ultimately effective Thompson.

Thompson's knockout of Dan Stiggen in his first UFC was a neat demonstration of one of the key principles of kicking—the pivot of the standing leg. In a round kick the standing foot must pivot. You cannot pivot at the knee joint, at least not in a healthy manner, so if you keep throwing round kicks without pivoting on the standing leg you are going to jack up your knee joint eventually. The first reason for the pivot is self-preservation, but the second reason is that it opens up the hips and allows for maximum flexibility across the groin in order to throw up high kicks. Often when you watch the best high kickers throw a high round kick, their standing leg will be pointing behind them in varying degrees.

To cut to the point, Stephen Thompson occasionally does a sort of short cut high kick. It was this kick that he used to knock out James DeCore in the WCL and Dan Stiggen in his UFC debut. Notice that Thompson throws the 1-2 and as his opponent circles past his right hand, he can throw the kick up to his right side. It travels half the distance and requires half the pivot on the standing leg and he can sneak it up with ease.

It might not seem like much, but compare the flight time of that short cut kick with his usual right round kick at an opponent directly in front of him and you will notice that the path of the latter is considerably longer and slower. Notice also that because Thompson often fights with his lead foot turned in and in a side on stance, to facilitate lead leg kicking, he has to turn his lead foot an even greater distance, providing a degree of telegraph as he steps into the longer round kick.

The hands down style which Thompson uses is the kind which has every fan saying “I've been saying for years he should keep his hands up” when a fighter finally gets knocked out, but its use opens doors for Thompson. Not only does the hands low stance mean that the fighter's punches come from slightly different angles, it also presents the head as a target. Hands-low done right is not neglecting to defend the head, it is presenting the head as bait. In Thompson's dismantling of now top ten middleweight and terrific boxer-puncher, Robert Whitaker, the latter focused his ire entirely on Thompson's head. Thompson got a bloody nose, this is true, but he also evaded bad situations time and time again because Whitaker's focus was drawn completely away from attacking Thompson's body or legs.

Thompson has a tendency to make the same folly as Lyoto Machida, Sage Northcutt and a lot of other TMA stylists—pumping out alternate straight punches rather than fluid boxing combinations, with no real movement of the head. This sometimes gets him caught with a shot or two mid-flurry from cleaner boxers, as against Whitaker and Ellenberger.

But that retreating left hand down the middle is easily Thompson's best punch. Being able to counter on the retreat has always been invaluable in MMA and Thompson is just continuing the tradition of strikers who land their best blows on the retreat.

Thompson's tendency to throw lead leg side kicks and hook kicks could well get him into trouble against Johny Hendricks. Missed side kicks an even successful hook kicks often expose the fighter's back momentarily. We have discussed how men like Cung Le practice turning out of this position with backfists, Thompson hasn't shown that and it makes me wonder if Hendricks will be able to latch onto Thompson's back by pressuring a poorly timed kick out of Thompson.

Stephen Thompson's most recent bout saw him pick up a spectacular knockout by wheel kick.

Furthermore, he landed the same wheel kick twice so arguing that it was luck is out of the question. There didn't seem to be much set up of the wheel kick but what I like about Thompson is that he always leans towards performing his wheel kicks from too far away and making distance on the kick. This probably comes from the huge number of spinning kicks thrown in WCL and a great number of those were smothered by the opponent moving in.

Not what you want to be doing in MMA, as Chris Weidman demonstrated against Luke Rockhold.

By performing the kick from a good distance, Thompson is far more likely to fall short than for the opponent to step all the way through the path of the kick to crowd him, and in kickboxing he was able to follow this with a sharp punch or two.

Thompson's next opponent is by far the stiffest of his career. Johny Hendricks is as wrestly a wrestler as anyone you will find. He knows what he is good at and he sticks to it whether the fans enjoy it or not. It's one thing shucking off the takedown attempts of a hurt Jake Ellenberger after he's tried to box unsuccessfully, or fighting off the wall 'n' stall of Patrick Cote, it's going to be a much tougher task to stop Hendricks from dragging the fight to the mat and keeping it there. The fight was changed at short notice to be five rounds instead of three, which you have to think benefits Thompson despite his inexperience in five rounders simply because Hendricks cuts so much weight and so reliably slows in the late going, but it will still raise more than a few eyebrows if Thompson can pull it off.

Ben Rothwell: Birth of a Contender

How Dominick Cruz Killed the King