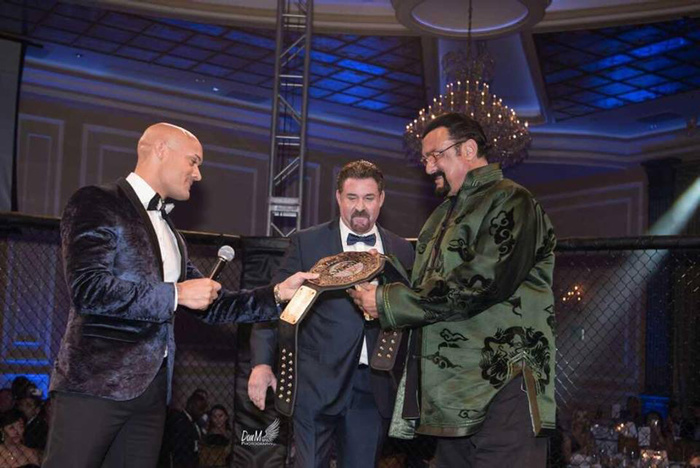 There is no more mainstream, only niches that are wider or narrower than others, and that's because the pop culture that once bound us together has been fragmented beyond recognition. TV, music, books, and nearly every other creative artifact intended for mass consumption are produced in such overwhelming volumes and at such high speeds and without any concerns for appointment viewing that it's impossible for casual consumers to keep up, let alone use it to find common bonds with our fellow citizens. The paradox is that the Oscars and other award shows are still somehow relevant: their one-night-only formats still compel an audience to tweet and complain in unison, in essence becoming the pop culture mainstream by simply singling out what art is worthy of praise instead of creating it.

The canon of Steven Seagal has long been ignored by the awards show illuminati, even the part in Out for Justice when he hits the guy in the face with a madball and leaves him spitting his teeth out onto a pool table. But no longer.

Last week, before Hollywood's annual celebration of itself, MMA promotion and production company Smash Global held an event called SMASH the Oscars 2017 in Los Angeles. A black-tie audience ate a four-course meal while MMA fighters fought in a cage set in the middle of a ballroom. UFC heavyweight Josh Barnett was in attendance at the event, which benefited a nonprofit dedicated to ending veteran poverty. So were single-digit UFC announcer Don "The Dragon" Wilson and the actress who played the female Terminator in Terminator 3: Rise of the Machines. The guest of honor? Mr. Under Siege himself, Steven Seagal.

Ostensibly, Seagal was on hand to be honored for his martial arts prowess: a press release dubbed the seventh-dan Akido black belt "one of Hollywoods (sic) First Mixed Martial Artists." That's a weird claim, but just go with it. (Actually, Seagal is probably the first Hollywood hanger-on to insinuate that he's a mentor to champion MMA fighters like Anderson Silva, Lyoto Machida, and Jon Jones, but who keeps track of the chronology of those things?) 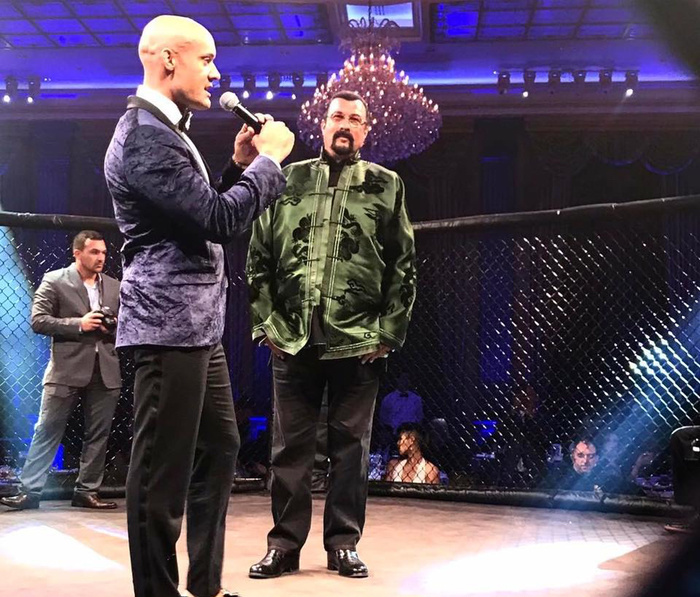 Speaking with The Los Angeles Times that evening, Seagal dipped into matters of movies and politics. "I liked Hacksaw Ridge quite a bit, but I thought it was a bad year for films," said Seagal, a voting member of the Academy of Motion Pictures Arts and Sciences. Regarding recent attention given to connections between Donald Trump and Russian president Vladimir Putin, Seagal, who was granted citizenship by Putin last year, said: "I think it’s coming from Obama and George Soros. And I think that we need to be friends with the superpowers when at all possible. I think Russia and America should be brothers. I think we need them and they need us." He called Trump’s first month in office "primarily" a success.

Steve Orosco, the former pro MMA fighter who founded Smash Global, awarded Seagal a championship belt at the event and told the Times that he planned to host similar celebrations in coming years. "Martial arts and action don’t get the recognition they deserve in Hollywood," Orosco said. "The academy, the foreign press, they don’t give awards to Steven Seagal, Jean-Claude Van Damme, even Arnold [Schwarzenegger]. Why hasn’t someone like Sylvester Stallone gotten a lifetime achievement award? He’s made more of an impact than anyone in Hollywood."

Stallone is criminally underrated for his work in front of and behind the camera, but then again, his impact owes as much to the nature of the long-ago era that he and Seagal shared. Today, when we have chance encounters with First Blood and Hard to Kill, we feel pangs of nostalgia because we remember begging our parents to rent them from the video store, or we remember watching them on Saturday afternoons with the swears dubbed over and the gratuitous violence and sex scenes cleaned up for network TV. There were fewer screens and fewer things projected through said screens. Seagal, Stallone, and their contemporaries are beloved because they're cultural shorthand: they are what we watched before we drowned in the deluge of things to watch.

The upside is that, in our atomized world, the sublime and the ridiculous can be praised on their own merits. Academy or not, Steven Seagal deserves recognition: he represents the apex of…something. His beady eyes and humorless jowls should be etched into the Mount Rushmore of 1980s/early 1990s martial arts action heroes alongside Chuck Norris, Van Damme, and Sasha Mitchell. (Fact: Kickboxer 2 is as legitimately great as the first Kickboxer is irritating.) Short of that, a gala evening with champagne and MMA fighters concussing each other inside a cage works too.