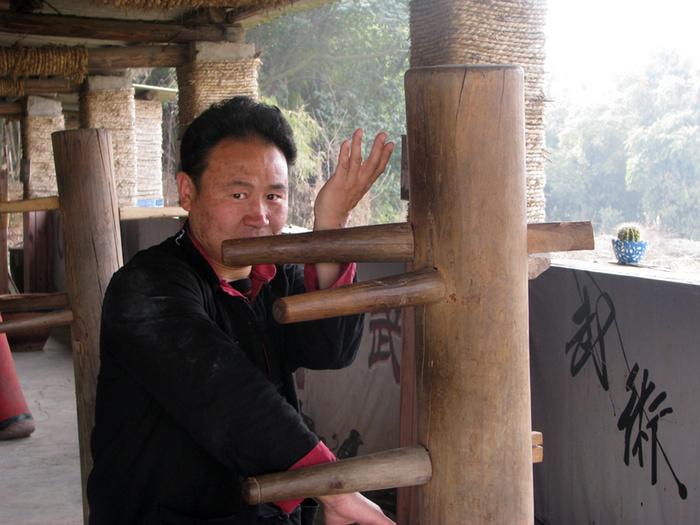 I remember the first days of my kung fu training, running with three brothers and Master Dai through the streets of pre-dawn Hanyuan in the mountains of western Sichuan. We ran through backyards and garden plots, through alleys slick with garbage and down unlit streets toward the Dadu River. Noodle shops blew steam into the receding darkness, skinny dogs ran across broken lots like the surface of the moon.

When we got back to the school, it was almost light. We were sweating and thirsty. One of us was trying to get the water spigot on the outside wall to work. Master Dai watched the struggle for a moment, then stepped in, chopped down on the spigot with the blade of his hand, and water started gushing out. Everyone stopped and gaped. He looked at us and said:

“If you train with me, you will not fear iron, iron will fear you.”

I spent the rest of the day doing that same chop on a wooden pole until my nerves were laid bare. Then I switched to stone locks. In the horse stance hurling this big stone towards my face, stopping and jerking it to my shoulder, laying the stone in place, and then releasing my breath and focusing on a distant point. Later, the iron circle. Bamboo twisted into a circle on a wooden frame, and I beat that frame with my forearms until Master Dai told me to stop. I wasn’t ready to kick the sandbag yet. Fourteen year old Wu Hong was though. He whipped roundhouses into the green canvas bag filled with sand and pebbles with his bare foot, sending it swaying in a cloud of brown dust. I’d look up from the iron circle and watch him do it and remember the message my nerves sent from my toe to my brain the first time I had kicked that bag. Shake my head and go back to pounding the circle.

When we all were beating something in sync, Master Dai would nod and murmur with approval, like Pai Mei watching the bride. Nothing like breaking some weak bodies and turning them into stone to get a kung fu master chortling over his teacup. Later in the afternoon we’d go over forms and on the very rare occasion lace up gloves and actually hit each other. Conditioning, body hardening, and forms, this is the diet of the kung fu student.

Tools of the Trade

The wooden pole that beat me up is known as a Dai Jong in Cantonese (Di Zhuang in Mandarin), is translated as “buried dummy,” and is basically nothing more than a thick wooden pole stuck into the ground. The one I was working on stood almost two meters tall (over six feet) and the base had been filled in with concrete. It barely budged no matter how hard I hit it. It’s a very simple tool and Chinese martial artists and generals have been using it for centuries to train hand to hand combat. You can practice pretty much any element of kung fu on the Dai Jong—footwork, striking, blocks—while hardening your body and mind.

The wooden dummy we know from kung fu movies is basically a buried dummy with arms and legs. Originally, wooden dummies were also buried in the ground, but new designs emerged in the 1920s that used slats to hold the dummy in place, making it portable and providing the dummy with some movement. Ip Man was a big fan of wooden dummies and incorporated them into his training regime; he is also credited with popularizing the design that is now the prototype for wooden dummies used today across the modern kung fu world.

The stone lock is a similarly simple yet effective tool—think of it as the first kettle bell—used by Chinese martial artists for strength and conditioning since before the Mongol conquest. Stone locks come in all sizes but only one shape, a padlock. You grip the ring of the lock and swing the stone under your legs and up over your head, switch hands at the peak, come back down and do it again. We also stood on two stones in the horse stance and did that exercise. It tears up your fingers while working out every muscle in your body.

The iron circle is something that Master Dai and his disciples claim is unique to southwest China. I haven’t seen an exact replica of it anywhere else, but the design is simple enough that I am sure there are similar tools in the kung fu pantheon somewhere. The iron circle is a wooden frame with a wide base weighed down by large stones. The top of the frame is a square and inside of that square is a bamboo oval wrapped in rope, or cloth of some kind. We stood in front of the circle and practiced forearm blocks by hitting the top and bottom of the circle and then ending the movement with a grab at the bottom, to strengthen our fingers. The idea was to imagine strikes aimed at our center, block them, and then seize the offending hand by the wrist and yank it off center. Switch stance over, repeat.

Simple tools that can be made by pretty much anyone with trees, a bamboo grove or stones in the area, very versatile, and above all enduring. 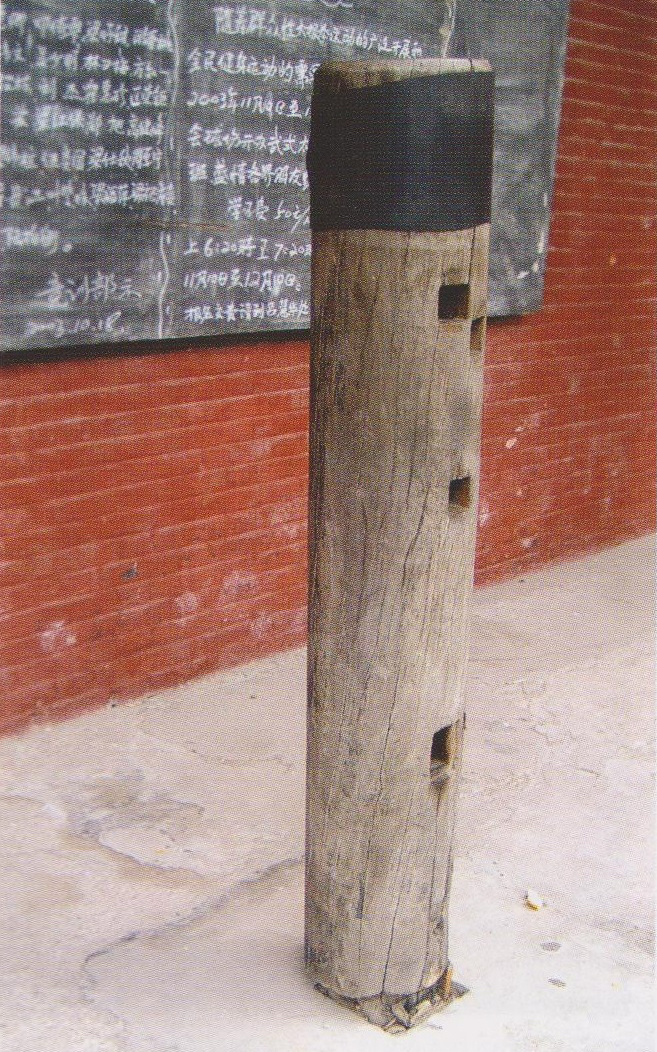 Training methods define a style. In traditional Chinese martial arts, the materials of choice are stone, wood, iron and bamboo. The method is to reproduce the taolu of your style on the surface of the nearest wooden dummy, or tree, or light post. The point is to retain your precision while striking something ungiving, thereby achieving the mental strength needed to overcome pain, and the death of nerve endings in order to give birth to scar tissue: the double-plated armor of the martial artist.

Such simple tools are critical components of the kung fu identity. A kung fu master is not a kung fu master unless he or she has a beat up old wooden pole and a bunch of stone locks scattered about the courtyard to show prospective students. Traditional martial artists believe these methods are not just effective in building strength and endurance, but are also a true measure of one’s dedication to the art. Simple methods that build character as much as they build the body and mind.

There are still old masters who teach the old ways, and many young people (especially Westerners) who seek out an identity in stark juxtaposition to the one they’re given. Stone locks and wooden dummies provide that through an ethos that is timeless and relevant, no matter how much the game changes to accommodate new players and new styles

Breaking and Healing in Martial Arts