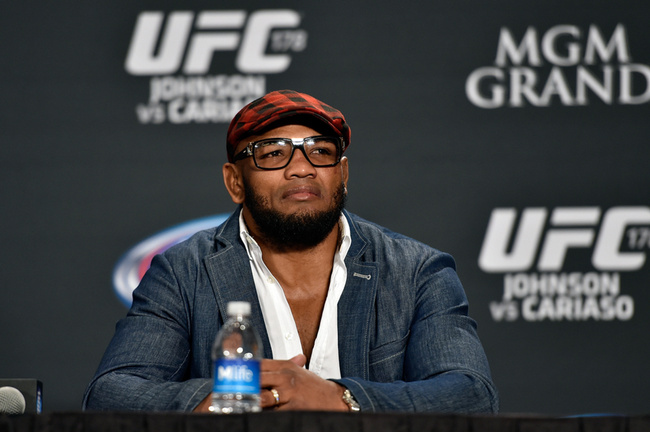 Felt like spring in Narnia when this weekend the main card at UFC 178 finally thawed the ground. From the moment Cat Zingano stepped into the cage and handled Amanda Nunes, through Demetrious Johnson’s fifth title defense over Chris Cariaso, I was on my feet. Remembering that familiar warmth.

Even the Tim Kennedy fight delivered, which like, who expected anything more than another boring lay-and-pray? In fact, his bout with Yoel Romero earned Fight of the Night, and provided our water cooler topic for today.

To recap: Romero won the first round. But Kennedy stole the second by rocking Romero with a barrage of shots in the closing seconds, knocking him against the cage, eyes glazed, out on his feet. The fight was clearly over, but for the grace of Big John McCarthy jumping in to signal the round’s end.

Romero held onto the fence, staring into the crowd at oblivion. His cornermen sat him down, doused him with water, and there he remained for the full minute allotted by the rules, which specifically state:

NAC 467.728  … [E]ffect of failure to resume competition. … if an unarmed combatant fails or refuses to resume competing when the bell sounds signaling the commencement of the next round, the referee shall award a decision of technical knockout to his or her opponent as of the round which has last been finished… 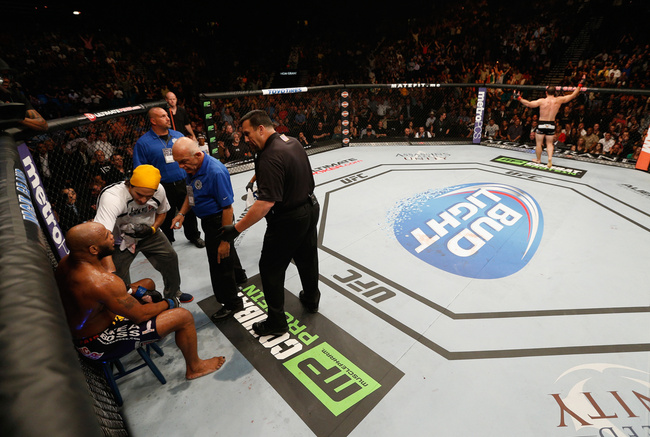 So Romero, consciousness slowly rising from the depths, each second gifting a greater chance of fending off the coming salvo from Kennedy, hunkered on his stool while the UFC cut-man greased up the gash on his brow. The one-minute rest period ended. Kennedy stood and his corner removed his stool. But Romero remained seated.

Every second coming to.

Twenty-eight seconds closer to lucidity, when Big John rushed over, and along with a Nevada Athletic Commission rep in the cage, yelled at Romero’s cornerman to get the hell out. John pushed Romero off the stool and the show resumed.

And here’s where #stoolgate or #stallgate, or whatever hashtag you favor, began.

Kennedy fans claim that Big John, per NAC 467.728, should’ve waved his hands and awarded their man a TKO.

After all, twenty-eight seconds is roughly 50% longer than the normal rest period.

BUT. But Romero fans retort that there lies a wrinkle in this story, occurring when the UFC cut-man over-greased Romero’s brow, and the NAC official instructed them to wipe him down.

Or maybe we should say: tsk… tsk… tsk…

As in, Romero’s corner knew what the fuck they were doing. They’re man was drooling at the lights, unable to continue. Unresponsive for much of his allotted break. So yes, they stalled. Hence, the slow wipe-down. And the seeming confusion amongst his team. No speak’a English… blah, blah, blah…

Brandon Gibson, striking coach in Kennedy’s corner, thought the deal was done: “When I was in the corner going into the third, and I saw Yoel’s entire corner leave, and he was still sitting on his stool – as a corner man I would never leave my fighter if he was still on the stool and didn’t get up. I would think that we conceded the fight. As a cornerman, I couldn’t leave the cage and leave the stool there.”

The bout resumed. Romero rose from the stool/ashes, and a mere fifty seconds in he caught Kennedy with a combination, which dropped him against the cage. Kennedy scrambled. Romero chased.

Backstage, an angry Kennedy confronted Romero. Check out a slice of the exchange, and note Kennedy’s fractured left orbital:

Afterward, Kennedy expounded on his position: “If you can't get off the stool in a minute, the fight is over. Not a minute and a half, not two minutes, not two and a half minutes while your coaches are still putting Vaseline on you and toweling you off. That fight should've been over, period."

NAC chairman Francisco Aguilar stated that due to the poor grease job performed by a neutral party he didn’t think there were grounds for an appeal. Which is probably correct, but that doesn’t mean it’s right.

The right outcome calls for declaring the fight a ‘No Contest’ and booking a rematch. Don’t read that as my wishing McCarthy stopped the action. Hell no. That turmoil, #stoolgate we’ll dub it, enabled the thrilling back-and-forth to swing a final time into Romero’s favor, and as if in recompense, both fighters pocketed a $50,000 bonus. Which is quite a consolation prize.