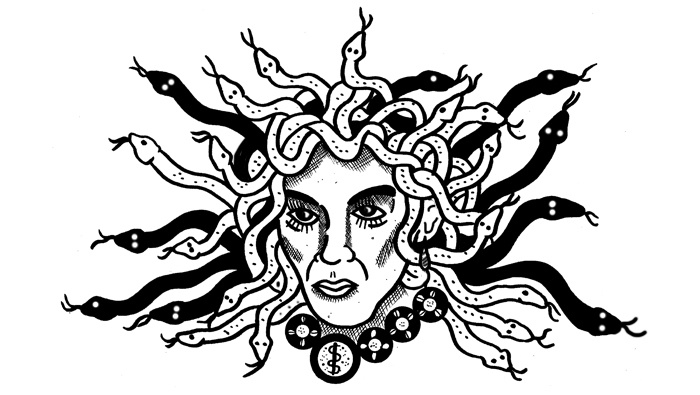 Here’s a fact: In December 2011, Cris “Cyborg” Justino (then Santos) tested positive for stanozolol, an anabolic steroid commonly used as a performance-enhancing drug, despite being banned by the International Association of Athletics Federations. The California Athletic State Commission suspended Cyborg’s license for one year and fined the fighter $2,500. Her December 17 fight against Hiroko Yamanaka was ruled a no contest.

Here’s another fact: December 2011 was four and a half years ago.

And one more: Justino has not once tested positive for stanozolol or any other performance enhancing drug since her return to the sport in April 2013. She is at least as clean as every other MMA fighter who has consistently tested negative for banned substances in the past three years.

And yet that one admittedly terrible choice continues to haunt Cyborg in a way that it doesn’t follow other fighters of a similar profile. 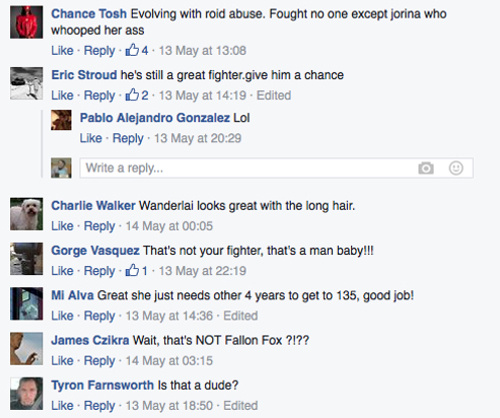 On an institutional level, it’s been used as an excuse to deny her opportunities while the likes of Ronda Rousey and even Dana White himself have openly mocked in ways that extend far beyond the boundaries of the fighter’s actual transgression. At the same time, the positive tests of fighters like Vitor Belfort, Chael Sonnen, Alistair Overeem, Nate Marquardt (who was fired from the UFC for his transgressions and has since worked his way back), and Anderson Silva, among others (see Cage Potato’s timeline on MMA steroid busts for a more definite collection of names) have left little to no permanent mark on their careers or reputations.

Cyborg called out this hypocrisy in a Facebook post last fall, writing: “Hmmmm ... someone has tested positive for steroids before fighting for a world championship in the UFC, but you are allowed to fight, and took nearly three years before the public finds out? Open your eyes! I'm clean, and I'm willing to try doing a year of Olympic tests before any fight, I wonder will the defending champion of the UFC 135 is willing to agree to the same? What do you mean? Some are crucified and others are not even mentioned!”

This hypocritical attitude gets even uglier as it trickles down to the fan level. Three years and six definitive victories into Cyborg’s redemption, it’s still impossible to write or post anything about her on the internet without a flood of comments about steroids and some ridiculously clever and in no way tired observations on her ostensibly masculine appearance. 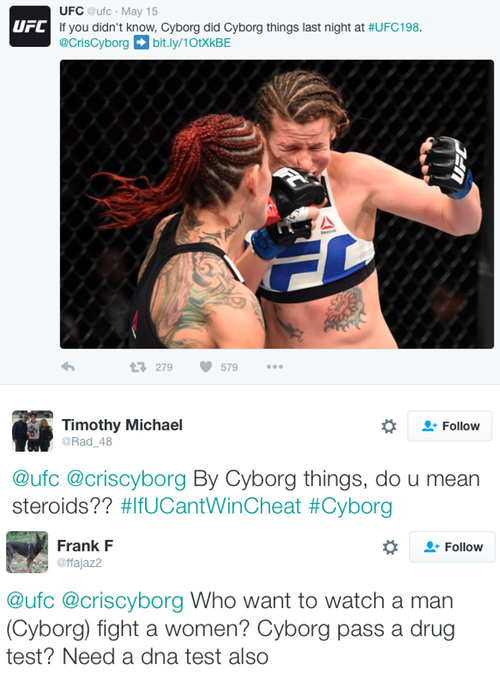 Now, performance enhancing drugs are a problem in every sport, and they’re a particularly thorny issue in one like MMA that has such strong foundations in cultures of honor and strict moral codes. And I have no interest in defending a choice that puts both the user of PEDs and their opponents at risk. Cyborg made a bad choice and she’s not the only one who has to live with the consequences of said choice, especially considering that it happened at such a crucial point in WMMA’s growing popularity both in and out of the sport.

But I struggle to believe that the public figures and keyboard warriors who still decry Cyborg’s steroid use are really that concerned about PEDs at this point. If these detractors really cared about the sanctity of the sport and nothing else, every story on other steroid offenders would get similar responses. If that was all that mattered, the comments wouldn’t descend into sexism and transphobia with such alarming ease and regularity.

Cyborg’s past has become a smokescreen behind which a segment of the MMA community can hide while openly expressing a lot of their anxieties about women’s roles in both the sport and in life. It’s an easy way to pretend that you’re just defending the purity of the sport when really you’re just lashing out at anything that challenges your personal feelings on the sport.

Cyborg is a dominant fighter both in and out of the cage. She is powerful and loud. She commands attention and takes up space in the public’s MMA consciousness. She doesn’t provide easy eye candy for an audience that still sometimes want to dismiss the conventionally attractive Ronda Rousey as “manly.” Her existence is, at the very least, incredibly inconvenient for alpha males who still want to see the sport as their sole domain, both as fighters and fans.

Some trolls aren’t afraid of expressing that outright. Those who fancy themselves more evolved, though, neither want to look they’re just openly hating a female fighter for those reasons, nor even believe that they would hate a female fighter for those reasons alone. And so they cling to the steroids. Cyborg did something bad once, they argue, and that’s all that matters.

But Justino paid her fine, she served her suspension, and she worked her ass off to get back into the MMA’s good graces. Her record of steroid use will always exist—and it should be discussed as a part of her career—but it’s an insult to both Cyborg and the sport to insist that it should define that career.

If she can have the guts to own up to her mistakes and move forward, the least her detractors can do is own up to their own motivations as they refuse to do the same.

Even in the UFC, Cyborg Remains the Defiant Champion of a Nonexistent Weight-Class