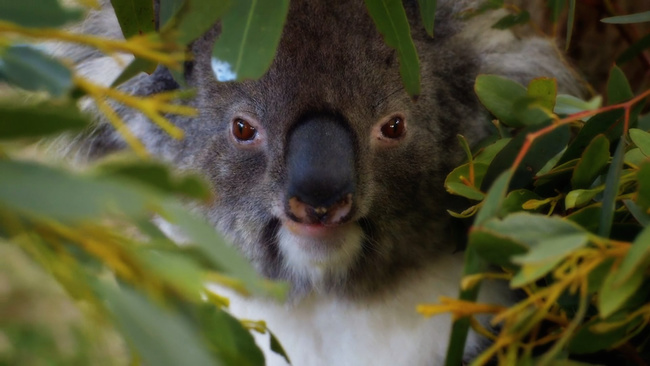 On an island continent of giant birds who can disembowel a grown man with a kick, and where seemingly every innocuous critter has developed some kind of deadly, deadly neurotoxin, it seems strange that the Australia's bear—the koala—has gone in the opposite direction altogether. But then, being a marsupial, the “koala bear” is not, in fact, a bear at all. Instead, the koala is more closely related to the wombat. An imposter. Just another fluffy quadruped that evolution slapped a pouch on—perhaps delirious under the heat of the Australian sun.

Unlike the noble bear, the koala is not a tenacious or agile creature, due to it subsisting almost entirely on eucalyptus leaves. That is what makes The Kwicky Koala Show so funny... I'm told. In fact, a koala is more like a sloth, or maybe a panda at a real push. With among the smallest brains in proportion to its bodyweight—finally a real world application of the term pound-for-pound?—of all mammals, and the largest caecum in proportion to weight of any mammal, the koala is more akin to a slow moving, furry sack of compost. Or a throw cushion full of semi-digested leaves.

With that kind of diet and that kind of brain, you would assume that any fight between koalas would play out like UFC heavyweight bout.

It's even reckoned that koalas developed their large ears in order to detect calls from greater distances, and to avoid unnecessary rough and tumble. The large glands on their chests secrete what ecologists refer to as “stank” as they drag their lazy carcasses over trees, shouting mad smack at each other across wooded areas, knowing they will probably never meet. But when two koalas do stumble into each other, things get crazy in a surprisingly technical fashion. I've seen cockfights and bullfights. I've watched goats fight and G.O.A.Ts fight. I've rolled with Gianni Grippo and rolled to Bob Marley. I've seen a lot of fights, and trained with a lot of fighters, and I have to say that to my own surprise and disgust, I would rate the koala as one of the finest technical grapplers of any species I've seen.

Let's address the obvious one first. THAT SPRAWL. The sprawl is the throwing back of the legs and the dropping of the hips to prevent an opponent from simply snatching up your legs and taking you down. It's a bread and butter wrestling technique, you won't get far in MMA without one, but this is just some random koala jobber, sprawling like Chuck Liddell with that look in his eye.

And here it is demonstrated even better by koalas. This little guy even re-sprawls a couple of times and tries to move to his opponent's back.

Doesn't matter if your opponent is the greatest grappler in the world, if they can't get you to the mat they're pretty stuck. There are some interesting ways to make an opponent concede top position—one of which is the guillotine. Snap the choke on convincingly and sometimes you can convince a man to turn to his back just to relieve the pressure. But if you're a koala, fighting over mating rights, things can get a bit more serious. Notice here how a bite on the oversized ear sends this guy rolling to his back.

Sure, it's "not cool" in most gyms around the world. But if you have something of an understanding with your grappling partner you can, as in basketball, declare "prison rules" at any time. The best time to do this is immediately before attempting your previously illegal technique. Personally, I like to get real close, cheek-to-cheek. From there, it's a matter of judgement. Sometimes it's good to bellow into the ear drum—utilizing the power of the kiai. Other times, you can buy an extra second or two of confusion by simply whispering it as you would to your lover.

A similar tactic was utilized by Mike Tyson in answer to Evander Holyfield's use of head butts in their second bout. Unfortunately, prison rules are more of a gentlemen's agreement than an actual set of rules and Tyson was promptly disqualified as Holyfield's corner scrambled to pick up pieces of their charge's ear from the canvas.

But strong wrestling is found all across the world. Monitor lizards and beaded lizards wrestle to determine strength, but a strong bottom game is necessary to be considered nature's finest grappler. As soon as the bitten koala rolls to his back, his opponent looks to pin him in north-south position. This is sometimes called 69 position, but as someone who stands for absolute seriousness in all facets of the sport, I tend to avoid calling it that.

The bottom man / koala's job is to get his legs back between him and his opponent, or to get up. He does this by throwing his legs up and trying to get them in front of his opponent's head. Where you will see every high level Brazilian Jiu Jitsu player in the world do this, you will rarely see them repeatedly kick their opponent in their head while doing so. And the fact that the koala has claws to do this with makes it even more effective.

But true grappling prowess is in overcoming the stronger opponent. Male koalas are not terribly intimidating from our perspective—getting up to about thirty pounds. Purely for perspective, if you tied a belt around its leg you could hammer throw one for decent distance, but you might struggle to drop kick it for real yardage. That being said, they are around twice the size of females. This means that should a female wish to fight off a sex-crazed male—a great many of them carry chlamydia, after all—she suffers from a severe size disadvantage.

Notice here that the female can't sprawl and the male simply ploughs through on a low single takedown. But, rather than simply be held down, the female controls the male's head, moves her hips, and scrambles up like Marcelo Garcia at his best. Of course, she is aided by the rake which comes in to buy her time and space, but it his her constant movement and indomitable spirit which inspire. (Though, attempting to sweep a top player with a rake rather than a broom is akin to bringing a knife to a gun fight.)

I can barely tell which one is Marcelo!

Perhaps this is why the koala has become an inspiration for a Brazilian Jiu Jitsu guard which is commonly used by smaller grapplers and is particularly common among female competitors. The so-called 'koala guard' is the position in which the grappler sits up and hugs the opponent's leg as a koala would a tree (though frankly, we're scraping the bottom of the barrel naming these guards now). Currently being utilized in the highest levels of competition by Michelle Nicolini and Mackenzie Dern, this position—more commonly known as sit up guard—can lead to all kinds of sweeps and takedowns on bigger opponents. Here, Dern turns an opponent over and comes up on top:

Though, I have to question the effectiveness of Dern's all around koala game. You will remember that koalas use the glands on their chest to rub their scent along trees and deter rivals. Dern's glands seem to do nothing except attract attention. Ultimately, koalas are one round fighters. They don't have the energy to keep up the battle over any reasonable length of time. But then, that is point of martial arts technique—to make the most of what strength an individual does have, or to make up for a lack of physical strength. It is for this reason that I suspect there is a better grappler out there than the koala, but like all of the greatest martial artists, no-one has ever seen them in action. That, of course, is the sloth.

With almost no muscle mass and the slowest reaction times of almost any mammal, however sloths go to battle, it must be beautiful. Bruce Lee stressed economy of motion, and I cannot think of a creature better suited to achieve that goal than the sloth. But until we get two sloths in the same place and motivate them to fight, the best grappler in the animal kingdom is the koala. No matter how much I hate koalas.