Struve's Injury Opens the Door for Dos Santos vs. Werdum 2 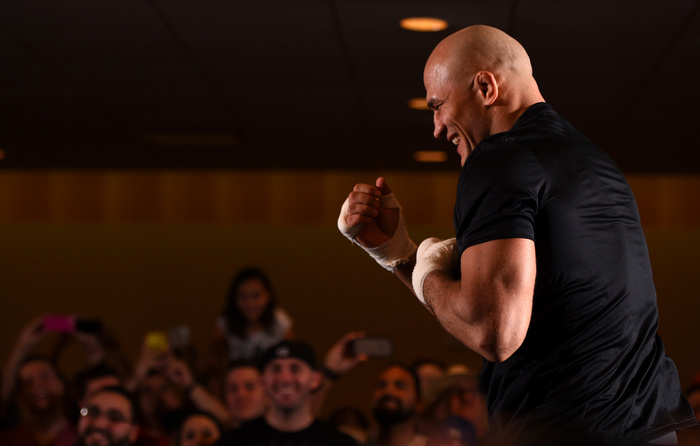 Back in 2008, a 24-year-old Brazilian heavyweight named Junior Dos Santos burst into the limelight by scoring a thudding, first-round knockout of Fabricio Werdum in his UFC debut. Since that fateful October day, Dos Santos’ career has been one of ups and downs. He’s worn the UFC heavyweight title, and doled out some of the most ferocious knockouts in heavyweight history. He’s also found himself on the wrong end of some pretty emphatic beatings. Since his UFC debut, Dos Santos has enjoyed mountainous highs and chasmal lows, and there’s bound to be more of both before he eventually decides to hang up the gloves.

The next chapter of Dos Santos’ action-packed career was expected to be written this February 19, when the UFC makes its anticipated return to Halifax, Nova Scotia, Canada. The Brazilian was supposed to handle main event honors for this Canadian card alongside Stefan Struve, a towering Dutchman who he walloped in his second UFC fight, just months after his decimation of Werdum.

Unfortunately for Dos Santos and the dedicated fight fans in Halifax, Struve has been forced out of this planned bout with a shoulder injury. And so, Dos Santos’ next opponent will have to be pulled from somewhere else in the UFC heavyweight division.

Interestingly, however, there is really only one viable option for Dos Santos at this stage. All it takes to identify that option is a quick scan through the UFC heavyweight top-15. Let’s start at the bottom of that top-15, crossing names of the list until Dos Santos’ ideal next opponent is the only man that remains.

The fringes of the UFC heavyweight top-15 is occupied by young prospect Luis Henrique, mustachioed wrestler Timothy Johnson, Polish grappler Daniel Omielanczuk and rangy former Bellator champ Alexander Volkov. Though all four of these men are undeniably talented, none has earned the opportunity to take on a former champion like Dos Santos. So let’s cross them off the list right away.

The next highest spot in the UFC heavyweight rankings is occupied by French prospect Francis Ngannou, a veritable highlight generator who is, at a glance, an interesting option for Dos Santos. Yet Ngannou is currently scheduled for a bout with Andrei Arlovski, who holds the division’s number seven spot, so he’s off the list too.

Next up, in the number ten spot is Struve. Let’s move on.

Above Struve, at number nine, is towering Hawaiian Travis Browne. Well, he’s scheduled to take on the UFC’s number eight heavyweight, Derrick Lewis, so we can cross both of them off the list of potential Dos Santos opponents too.

Next up is number seven. As I’ve already said, that spot is occupied by Andrei Arlovski. While he’s a very interesting potential opponent for Dos Santos, we know that he’s tied up with a looming scrap with Francis Ngannou, so it’s on to number six.

The number six spot in the UFC heavyweight rankings is held by walk-off knockout purveyor Mark Hunt. There are two reasons we can cross Hunt’s name off the list with confidence. First, is that he’s currently waging legal war on the UFC. This could well keep him on the shelf for some time. If it doesn’t keep him on the shelf, then his UFC 209 bout with Alistair Overeem will go ahead as planned. Either way, he’s going to be busy.

So, how about number five? The UFC’s fifth-ranked heavyweight is Big Ben Rothwell. Rothwell would undeniably love to fight Dos Santos. The problem here, is that Dos Santos handed Rothwell a fairly decisive ass-kicking less than a year ago. We’ve seen what happens when the current versions of these two big men fight and so, for the moment, there’s just no magic in their potential rematch. As such, Big Ben gets slashed from the list too.

The number four spot in the heavyweight ranking his held by Dos Santos himself. Barring some serious scientific innovations in the immediate future, the likelihood of Dos Santos fighting himself next seems slim, so onward and upward.

The next spot in the heavyweight rankings is occupied by Alistair Overeem. The first problem with an Overeem vs. Dos Santos bout is that we saw just that a little over a year ago, and Overeem won it pretty decisively with a nice, second round KO. Even if this were a compelling rematch, however, we know that Overeem is currently scheduled for a bout with Hunt. So, this one is an unlikely candidate too.

Then there’s number three: Cain Velasquez. Velasquez and Dos Santos, as any fan of the heavyweight division remembers, have fought three times before. And while Dos Santos won the first of those three fights with a blitzkrieg knockout, he was absolutely hammered in his second and third fights with Velasquez. While anything can happen in MMA, especially when ever-evolving fighters like Dos Santos and Velasquez are involved, a fourth fight between these two leviathans is always going to be a tough sell. We’ve all got a pretty good sense of what a Cain Velasquez vs. Junior Dos Santos bout looks like, and it ain’t pretty. Then there’s the fact that Velasquez had back surgery less than two weeks ago. Just another point against this potential fight.

These leaves us with the UFC’s two top heavyweights. One, of course, is heavyweight champion Stipe Miocic, who Dos Santos actually defeated with a narrow decision back in 2014. While a rematch between these two big men is certainly a possibility down the road, however, now just doesn’t seem like the time. Miocic, after all, is still enjoying a bit of time off after a busy 2016. When the champ is ready to return, it’s likely to be against somebody with a higher station in the division.

So, we’re down to the last man standing: the UFC’s number two ranked heavyweight, Fabricio Werdum. After losing the UFC heavyweight title to Miocic in May, Werdum bounced back with a strange but impressive defeat of Travis Browne. He was then scheduled for a rematch with Velasquez—the man he won the heavyweight title from back in 2015—but was left out in the cold when Velasquez was forced out of their planned bout with an injury.

And so here we are, more than eight years removed from Dos Santos and Werdum’s first meeting, in a better position for their rematch than we ever have been before. Both are on the cusp of title contention. Both need an opponent after their recently planned foes withdrew with injuries. The stars have aligned, the pieces have fallen into places. Whether it happens in the main event of the UFC’s return to Halifax or not, the time is now for Dos Santos vs. Werdum 2. You’re welcome, Mick Maynard.

Dos Santos vs Rothwell: Jabbing The Streak to a Halt