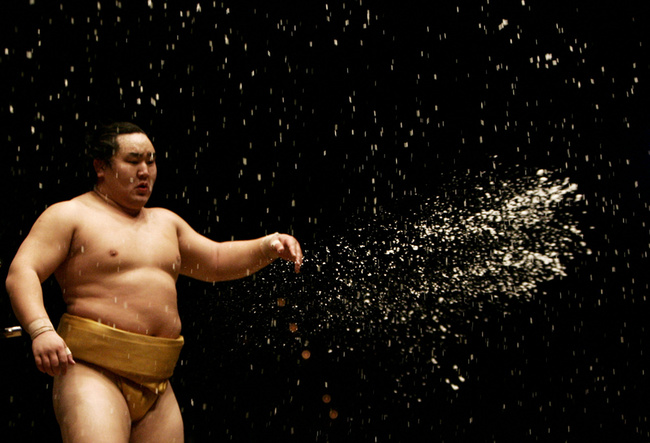 In a world where fight fans are reluctant to watch the lower weight classes because too many fights go the distance, it is curious that sumo has not become tremendously popular outside of Japan

The number of alienating traditions might go some way towards explaining it. Throwing salt into the dohyo, the many ranks of wrestlers, the tradition of the yokozuna and his ring entrance—which can traditionally only be one of two methods—the dress of the gyoji (referee). There's a great deal of ceremony, and unless you're willing to go out of your way to read up on it, it's difficult to understand the purpose and significance of it all.

Perhaps it is not helped by the image of the sumo wrestler. The excess weight which they carry gives the impression of morbid obesity rather than of supreme athleticism. Obviously, weight is important to a rikishi, but it is interesting to note that of the few to achieve the coveted rank of yokozuna, the majority were not the biggest wrestlers competing in their day. Certainly the majority of wrestlers are not just tremendously strong, but agile—most being able to perform the splits. In truth, Sumo is a game of skill and poise as much as it is one of size and strength.

A beautiful reversal from the first day of the current basho.

The most exciting element of sumo is its simplicity. There are only two ways to lose (spare disqualification): by touching the floor with any surface except the bottoms of the feet, or by being driven out of the ring. There is no division of weight, and the rules are fairly unrestrictive. It's an all out, open weight affair where a time limit is almost completely unnecessary.

Now the element which makes sumo so unique is the ring out. There are occasions in amateur wrestling, Judo, karate, old U.S style kickboxing and other combat sports fought on open mats where the reward for stepping out of bounds (buying time, bail on a losing scramble, etc) actually outweighs the penalty for doing so. In sumo that is never, ever the case. In fact, the majority of bouts are won by yorikiri or forcing the opponent out of the ring. Most of the time this is done by achieving a strong underhook (or double underhooks) gripping the belt, driving to the boundary, and then performing multiple, short, explosive jumps into the opponent. Funny to watch, but effective nonetheless.

My enjoyment of sumo has made me wonder for years what effect this rule would have on mixed martial arts. The traditional Chinese fighting tournament of lei tai was contested on a raised platform over water, and while it was a bareknuckle or armed scrap, being thrown from the platform constituted a loss. Were we to elevate modern MMA bouts on an unfenced platform, would the bouts take on a dynamic more akin to that of historical lei tai,  Smash Bros, or sumo?

No time is wasted in sumo, and the most important phase of the bout is the tachi-ai, the initial charge. Both rikishi assume their stance, squatting down low with their feet turned outwards. As soon as both wrestlers have both fists on the ground, the bout commences. This leads to plenty of mind games as each man tries to assure he's the last to touch both down.

There are dozens of techniques and strategies to be found in just this instant of combat. In The Joy of Sumo, David Benjamin simplified wrestlers' approaches to the tachi-ai down into Hookers, Bulldozers, Boxers, Stranglers, and Matadors.

Of course the best wrestlers are those who change up strategies regularly and on the fly, and even within these classifications the methods are wide and have considerable overlap. It is often assumed that driving straight forwards and attempting to push the opponent out to twelve o'clock is the objective of sumo. And it's certainly true that many rikishi have made respectable careers of simply driving forwards. An example in the current Basho, which has just concluded its ninth day, is Kotoshougiku. He picks up the vast majority of his wins by rushing his opponent and regardless of his grips driving them directly backwards, and barely employs throwing techniques at all.

In fact, Kotoshougiku is such a force head-to-head that he was able to stop the 6'4, 350lbs Hakuho, one of the greatest sumo to ever live, in his tracks and drive him from the dohyo.

Earlier today a sumo named Kotoyuki showed that straight forward aggression will always be a force:

The danger, of course, is that if a wrestler attempts this every time, he can easily be redirected, side stepped, or slapped down. The sort of tachi-ai techniques which Benjamin termed 'Matador' openings. Here's the aforementioned Kotoshougiku going to what he does best, and being a bit too predictable.

But even within that bulldozing style there are variations. Some rikishi like to connect in the classical fashion with the forehead on the chest and the hands in the armpits. Others like to barge in behind the shoulder, which lends itself nicely to taking an underhook if the opponent's elbows flair on impact.

When looking to counter a head-first charge from the opponent, some rikishi will attempt to use kachinage—using the forearm under the jaw to raise the opponent's head. Here the aforementioned Hakuho catches Miyogiryu under the jaw as he drives in and lays the lesser wrestler flat out:

The astute viewer will notice Hakuho's more staggered starting stance, a trademark of his.

What Benjamin called the boxers are really men who enjoy using the harite (open palm) to strike their opponents. These are normally thrusting strikes which also serve to push the opponent back or drive his head behind his centre of balance. Once a rikishi is reeling or trying to use his own tsuparri strikes in return, his elbows are out and once again a grip may be taken on his mawashi. Akebono, a man who was so accomplished in sumo that he was the first foreigner to be granted the title of yokozuna, and a man whose post-sumo MMA and kickboxing careers were so ludicrously sad, was a master of using palm thrusts to drive his opponent backwards.

Of course, this is where Street Fighter's E. Honda got his Hundred Hand Slap. Knockouts aren't unheard of, but more often than that it is simply a case of a wrestler being stunned and easily pushed to the floor.

Similar to this is the act of thrusting the neck, nodowa. While choking the opponent is forbidden, driving the web of the hand into his throat is fully permitted and its effects on an opponent's posture are undeniable. Here's Kotoyuki again, this time bending his man over backwards as he drives towards the boundary:

One of the dangers of committing to these linear, thrusting techniques, however is that they can be redirected. The great Czech rikishi, Takanoyama, made a speciality of parrying and arm dragging his opponent's thrusts. It was beautiful to watch.

I'm not going to dive into the many throws and sweeps of Sumo, because I want to focus on the tachi-ai, being that it is such a unique area of the contest. Perhaps one of the finest technical sumo, pound-for-pound, to ever compete was Mainoumi. Never much more than 215lbs, and only 5'7, Mainoumi was a dwarf in the basho. Yet through his quick wits and vast technical repertoire, he became a fan favourite and had tremendous success in spite of his size disadvantage. Largely through crafty actions during the tachi-ai.

Mainoumi tried it all—he'd fake a charge, then duck in low to get his underhooks. He'd attempt to jump over or around his opponent. Or he'd jump up, clap in front of his opponent's face, and use their reaction to grab their mawashi. From there he would look to move them to the edge or execute his famous triple attack mitokorozeme—part trip, part force out.

Of course, fighting giants is never going to be a safe occupation and Mainoumi's career peaked and collapsed in the same moment as he bested the 600lbs Konishiki again, but had the giant fall on his leg, breaking it and forcing Mainoumi out for a considerable length of time—he was never the same.

There's only a few more days left in the 2015 Nagoya Basho, and it's all going up on youtube long before the West is out of bed. If you like mind games, unfeasibly big people, and beautiful wrestling techniques, check it out. I leave you with a clip of retired yokozuna, Asashoryu turning full heel as he side steps and punts out his opponent's leg during the tachi-ai. Supposedly it was part of Asashoryu's quest to use every technique in sumo, but I doubt that consoled his opponent who left with a nasty limp.

Photographing the Next Generation of Sumo Superstars