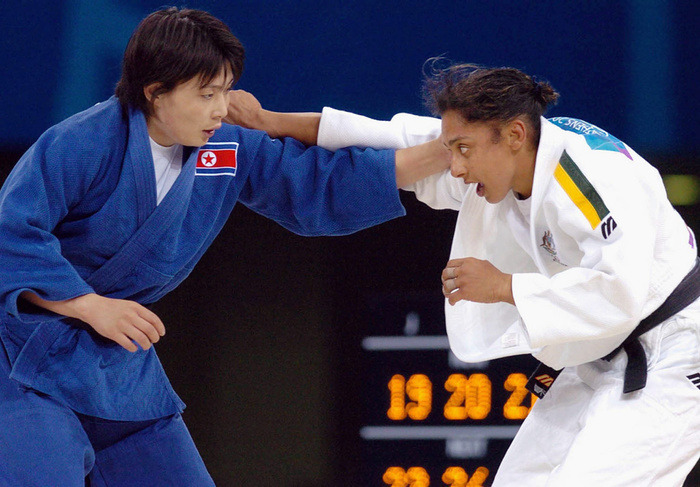 If, like other reasonable human beings, you’re spending much of your time these days despairing about the global refugee crisis and a summer Olympics plagued by economic inequality and contaminated by sewage-infested waters, we’re happy to offer a small bit of sunlight breaking through the clouds of calamity. Earlier this week, the Executive Board of the International Olympic Committee, which had already done something decent this week by getting rid of headgear in the men’s boxing competition, struck yet another blow for humanity by creating a team of refugee athletes to compete in this summer’s Olympic Games in Rio de Janeiro, Brazil. The team, whose official name is now Team Refugee Olympic Athletes, will be treated like all the other teams at the games. They’ll get their own welcoming ceremony at the Olympic Village, they’ll be housed and given team uniforms, and they’ll march in the Opening Ceremony. If a member of Team ROA wins an event, the Olympic flag will be raised and the Olympic anthem played.

The IOC figures it’s the least they can do for the nearly 20 million athletes and non-athletes of the world currently living without national affiliation and forced to take shelter in countries that aren’t their own.

“We have all been touched by the magnitude of this refugee crisis,” IOC President Thomas Bach said following the Executive Board meeting Wednesday. “By welcoming this team, we want to send a message of hope to all the refugees in the world.”

To help them find the athletes that will make up Team ROA, the IOC has asked the National Olympic Committees of the 206 countries competing at this summer’s games to identify any refugee athletes with Olympic-level potential. So far 43 candidates have been brought to the committee’s attention. Bach believes when all is said and done, the team will be made up of between five and 10 athletes.

At least two combat-sports athletes appear to be locks to be among them. The first, Raheleh Asemani, is a 26-year-old Iranian refugee living in Belgium who finished first in this year’s European Olympic taekwondo qualifying competition in Turkey competing under the flag of the World Taekwondo Federation. After escaping from Iran in 2012 for reasons she says she does not wish to disclose, Asemani became a postwoman in her adopted home city of Flanders and continued her taekwondo training. Back in October, when Thomas Bach first announced the possibility that refugee athletes would be allowed to compete at this year’s games, Asemani, a silver medalist at the 2010 Asian Games, was one of three athletes identified by the IOC as filling the necessary criteria.

One of the other three, and one of the 43 now up for a spot on Team ROA, is Yolande Mabika, a judoka who fled from her home in the Democratic Republic of the Congo three years ago and sought asylum in Brazil. In 2013, Mabika and her teammate Popole Misenga (who is also a frontrunner for a spot in the Olympics) sought asylum from the Brazilian government during the World Judo Championships in Rio. The two come from the city of Bukavu in the east of the DRC, the area hit hardest by the deadliest conflict in modern African history. During the civil war that ravaged their country between 1998 and 2003 more than five million people were killed, millions more were left homeless, and the country was ravaged by famine. Stories circulated about militia forces eating the corpses of their enemies and wearing severed body parts around their necks. Misenga decided to flee after his mother and brother went missing, and by the time of the 2013 tournament in Brazil both he and Mabika had despaired of competing for coaches who locked them up when they lost and often didn’t feed them for days on end. They decided to risk the unknown perils (linguistic, cultural, bureaucratic) of a new country rather than return to those they knew awaited them back in their own.

Now living in Pina de Bras, an area of Rio with a large African-migrant population, Mabika and Misenga view these Olympics as a chance to represent not only their people but anyone forced to live without a country.

“I represent everyone,” Misenga told the Guardian in January. “I’ll get a medal for all refugees.”

As for Yolande Mabika, she said she hopes to win a medal in Rio not just for the glory and the sense of accomplishment but because if she does she’ll be able to broadcast her contact information on television, which, she says, may be the only chance she has left of ever hearing from her family again.

Is There a Place for Capoeira in the Olympics?