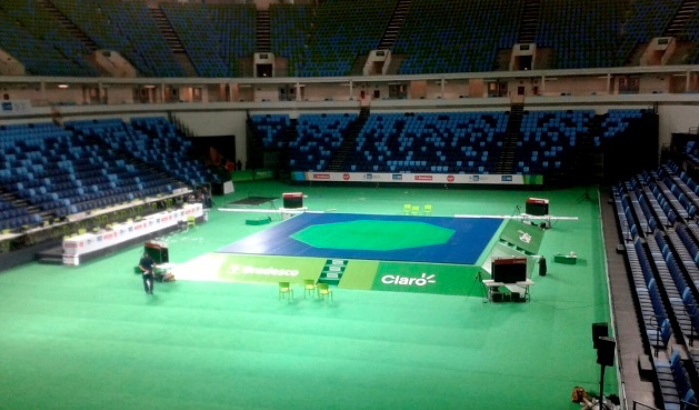 This year for the first time Olympic taekwondo competitors are fighting in an octagon. The World Taekwondo Federation made the decision to make the move to the MMA-shaped ring as a way to speed up fights, give fighters more places to move, and get rid of the corners the traditional rectangle provided that could be used for retreat and passivity. Chungwon Choue, the president of the WTF, said at a press conference earlier this week that the change was made to make the sport “more athlete-focused and engaging for fans.”

More than 20 years after the first UFC event there is still no consensus as to who came up with the idea of the promotion’s now-iconic, then-terrifying octagon-shaped ring. Jason Cusson, an art director hired to construct the UFC’s original fighting surface, claimed he got the idea from a 1980 Chuck Norris film called The Octagon. UFC production designer Greg Harrison, who got Cusson the job, says he came up with the idea while brainstorming an arena that would be safe and not favor any one fighting style, but that would also work for a television production crew. Maybe people still give credit for the octagon to John Milius, a student of Brazilian jiu-jitsu master/UFC idea man Rorion Gracie and the director of Conan the Barbarian and Red Dawn, who was brought in as a sort of unofficial “creative collaborator.” But now it seems his ideas tended toward the more fanciful: alligator moats and electric fencing and such.

Several other (if not all) early UFC executives claim credit for the Octagon, saying they saw it as the best way to distinguish no-holds-barred fighting from boxing and immediately establish the UFC brand, but only Greg Patschull, a martial artist who tried to put on his own free fighting event, dubbed Cage of Rage, nine months before UFC 1 but settled for a martial arts demonstration instead, seemed to recognize the actual martial arts value of the design. "The reason was so no one could get pinned in a corner," said Patschull. "That's why I went with an octagon.”

“It means your opponent has nowhere to hide,” he said.

In April 2015, the UFC signed Russian heavyweight freestyle wrestler Bilyal Makhov to a contract despite the fact that the three-time world champion had never fought an MMA fight in his life. To date, Makhov still hasn’t fought in MMA, but he has declared that he will make the move to the UFC after he wins a gold medal at this year’s Olympics. UFC commentator Joe Rogan said recently that he expects Makhov, who he calls a “big fucking gorilla,” to dominate the UFC heavyweight division with his size and takedown ability. “Everybody’s fucked,” Rogan said. Makhov fights his first Olympic match on Saturday.

Throughout the ancient Persian and Hellenistic worlds domes and tents were associated with the heavens. These domes were often shaped as octagons to represent the geometric middle ground between the circle, which represented perfection and the heavens, and the square, which stood for the earth and the life of man. 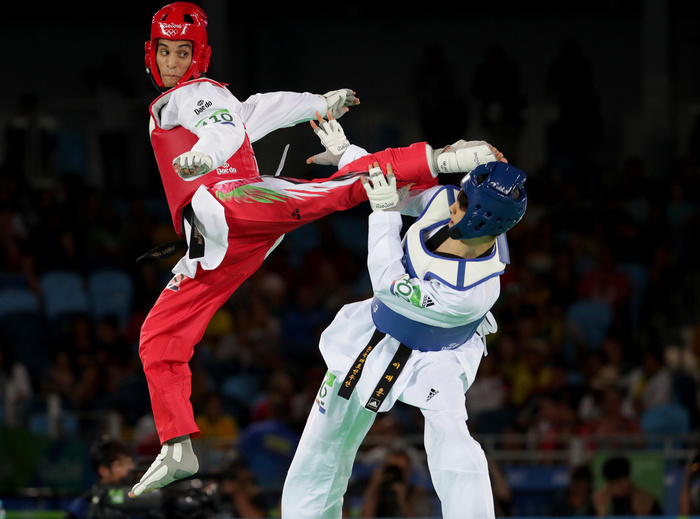 Building on ancient geometric symbolism, early Christians came to see the octagon as a symbol of Jesus’ resurrection and its role as the connecting line between humanity and god. As a result many early Christian martyriums (churches bearing “witness to the Christian faith by referring to an event in Christ’s life … or sheltering the grave of a martyr”) and baptiseries (areas of a church set aside for baptisms) were built as octagons.

Historians believe that the holy Muslim site the Dome of the Rock was built in the shape of an octagon both as a reflection of Ancient Persian architectural influence and, more symbolically, because Jannah, the Muslim paradise, is surrounded by eight gates that represent eight virtues that will grant believers entrance, including Bāb al-Salah, for those who were punctual in prayer; Bāb al-Rayyān, for those who fasted; and Bāb al-Dhikr, for those who showed zeal in remembering God. According to the Prophet Muhammad, "If anyone testifies that none has the right to be worshipped but Allah Alone Who has no partners, and that Muhammad is his slave and His Apostle, and that Jesus is Allah's slave and His Apostle and His word which He bestowed on Mary and a spirit created by Him, and that Paradise is true, and Hell is true, Allah will admit him into Paradise through any of its eight gates he likes."

By all accounts, the number of fights ending in submissions during this year’s Olympic judo competition is up over previous years. American Kayla Harrison, who became the country’s first two-time Olympic judo champion last week, won all her fights by submission, including a last-second armbar in her gold medal match against Frenchwoman Audrey Tcheumeo. And defending Brazilian champion Sarah Menezes was taken to the hospital after fighting through an armbar during her losing effort against Mongolian Urantsetseg Munkhbat.

Despite judo’s reputation as the “gentle art,” judo’s governing body, the International Judo Federation, has in recent years been encouraging more aggressive attacks and more of the submission-based groundwork more commonly seen in the increasingly popular worlds of Brazilian jiu-jitsu and MMA.

This remains the greatest irony (or the greatest hypocrisy, depending on your mood) surrounding MMA in our still-squeamish world: If you master one of its elements—wrestling or boxing or taekwondo or karate—you’re an Olympian, a patriot, an artist, an intellectual, a paragon of discipline and focus and persistence, a hero and a role model to children. If you master all of them you’re an animal.

Adeline Gray is Wrestling For a Gold Medal and For Equality

Olympic Judo Celebrates Humanity at Its Best (and Worst)