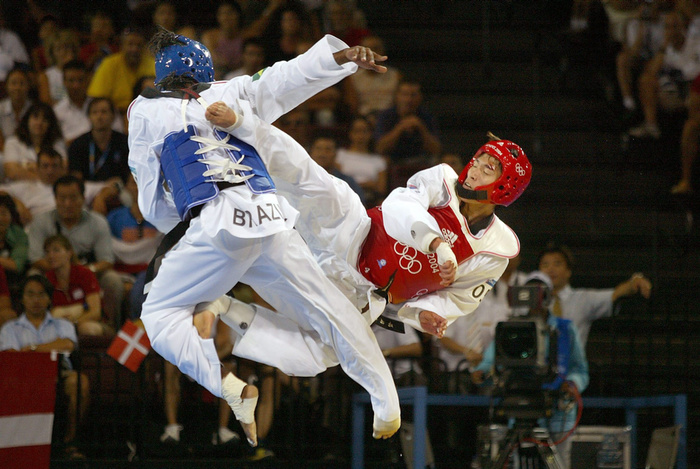 The 2016 Olympics, set to take place in Rio de Janeiro, Brazil, has been dogged by controversy since the country was awarded the world’s most prestigious sporting competition.

Whether it’s stories of Australian Paralympians being robbed at gunpoint in Rio, Russia’s issues with systemic doping, the Zika virus or stories of Brazilian communities being unlawfully evicted from their homes to make way for Olympic stadia, the process of Rio’s preparation for the Games has been a cause for concern throughout—and that’s not mentioning the ongoing political turmoil Brazil has endured over the last year or so.

There has been further furore caused by these Olympic Games. But, this time, blame can’t be levelled at the Brazilians. The upcoming Rio Olympics will see the introduction of new rules for taekwondo the Games—all in aid of creating a more viewer-friendly sport which is easier to follow for the casual fan.

The size of the competition ring has shrunk considerably, meaning there is less space to retreat and forge a tactical plan of attack. Meanwhile, the sport’s governing body, the World Taekwondo Federation (which produces the fantastic acronym of WTF), has also agreed to awarding additional points to competitors for landing spinning strikes. Now, head kicks score three-to-four points (punches to the head are prohibited), while punches and kicks to the body score one point without taking a spinning attack into account.

Olympic taekwondo has been in a state of flux since a series of debacles were attributed to the discipline at the 2008 Olympics in Beijing, China. These problems severely hampered the sport’s place as a regular in the Olympics and the WTF were forced to change various aspects of their competition to appease infuriated International Olympic Committee (IOC) officials.

For example, the quarterfinal match between Great Britain’s Sarah Stevenson and local hero Chen Zhong was plagued with controversy. Zhong had a slim 1-0 lead throughout the contest. But, Stevenson landed a clear strike to the face of Zhong with just four seconds remaining. Less than half of the human judges present recorded the obvious hit and thus the two points (which would have advanced her through to the semi-finals) were never registered. The British contingent arduously protested the decision after reviewing video of the fight and the WTF overturned the judges’ decision in an unprecedented move. This prompted the elimination of human judging in favour of electronic judging via a series of sensors at the 2012 Olympics in London.

In addition, there were allegations of match-fixing in the bout between Canadian medal hopeful Ivett Gonda and Sweden’s Hanna Zajc. Despite the Canadian’s dominance, Zajc was inexplicably awarded the points victory. Gonda’s coach Shin Wook Lim accused the Chinese judge, Lei Zhao, of not awarding Gonda the points she deserved, as she would’ve faced a Chinese athlete in the next round.

As in the video above, Cuban taekwondo player Angel Matos kicked a referee in the face for disqualifying him, before attacking match officials and spitting on the mat. Another incident saw American Steven Lopez, a two-time defending gold medallist at the time, accused the WTF of intimidating the heads of the 25 teams from filing any protests at the games after he felt he was wronged in his bout against Italy’s Mauro Sarmiento and his challenge was quickly rebuffed.

The 2008 Olympics were seriously damaging to the reputation of taekwondo as a whole and the sport was facing the very real possibility of ending up on the Olympic scrapheap. As a result, the WTF introduced sweeping changes to maintain the discipline’s viability as an Olympic discipline.

Taekwondo is fast becoming Tech-wondo. As mentioned above, the bout between Stevenson and Zhong forced the WTF to introduce an electronic scoring system through electronic sensors positioned around competitors’ bodies and socks—thus eliminating the potential for human error as the system automatically counts up the points from any strikes forceful enough to be registered.

While it sounds like a good idea in theory, there are inherent issues with this new format with traditionalists and athletes voicing their concerns. From a traditionalist perspective, their argument is that non-taekwondo techniques are easier to score with, which has led to taekwondo players insisting on using quick front-leg jabs to earn easy points, rather than using the powerful turning kicks usually associated with the Korean martial art. This has been referred to as “chicken fighting” as competitors disregard the techniques they learned for decades for cynical pragmatism.

Meanwhile, the athletes aren’t too enamoured with the new scoring system themselves as they simply don’t trust it—citing its unreliability as a big issue. Britain’s first and only ever taekwondo Olympic gold medallist Jade Jones missed out on a medal at the 2015 World Taekwondo Championships in Russia when the electronic scoring system froze with seconds to go. Both players were tied at 9-9 and the system crashed just as Jones landed a reverse kick to the chest of her Iranian opponent Kimia Zenoorin. This strike and its points weren’t recorded, but Zenoorin’s counter strike was. The fight was awarded to the Iranian with a score of 10-9.

The changes made by the WTF aren’t going to be appreciated by everyone and it remains to be seen how these latest rule amendments made ahead of the Rio Olympics will be received. But, their hand was forced. Chung-won Choue, the president of the WTF, said: “If we are afraid of change, taekwondo would already have disappeared from the Olympics. But taekwondo now has become a core Olympic sport as we have been making continuous efforts over the years to make the sport more fun. And so we will introduce a renewed version of taekwondo in the upcoming Rio Olympics.

Besides the new implementation of electronic sensors inputted into each competitor’s head gear, it would appear the WTF have looked admirably at MMA when determining some of their rule changes. Choue outlined some of the differences we will see in Rio. “Athletes can also select their own entrance songs. Getting away from the previous square-shaped mat, athletes will compete on an octagon-shaped mat at the Rio Games. This will be another example of making taekwondo more exciting as the octagon-shaped mat will encourage combatants to engage in more continuous action.

"The biggest reason for these changes is to provide taekwondo fans more excitement as we learned that any sport that doesn't satisfy its spectators and TV viewers will not survive on the Olympic stage," he said. "It is important for us to reflect upon those experiences. No one knows how taekwondo will be more interesting at the 2020 Olympics."

You could see why defenders of a martial art steeped in so much history will be perturbed at the westernisation of their discipline for the sake of attracting casual onlookers. It remains to be seen whether the WTF’s changes prove successful or not.

IBF Joins WBC, Will Punish Professional Boxers If They Compete at the Olympics